The Food and Drug Administration authorized a set of e-cigarette products for sale in the United States for the first time on Tuesday after it concluded that the benefit to adult cigarette smokers outweighed the risk posed to young people.

The authorization of an e-cigarette device and two accompanying nicotine cartridge products, which are sold under the brand name Vuse by the R.J. Reynolds Tobacco Company, is a shift in the ongoing debate over e-cigarettes, fueled by criticism that tobacco companies are addicting another generation to nicotine under the guise of helping adult smokers quit.

The FDA authorized only tobacco-flavored nicotine cartridges and denied requests from R.J. Reynolds for 10 flavored products, saying that young people typically start e-cigarette use, often called vaping, not with tobacco but with flavors such as fruit, candy or mint.

A request for authorization of menthol-flavored Vuse products was still being evaluated, the FDA said.

E-cigarettes have been sold in the United States for more than a decade with little regulation, but the FDA has been conducting a major review of the products to determine which can remain on the market. Last year, it told manufacturers of e-cigarettes and other items that they would have to apply to the FDA for permission to continue selling their products. The review, covering about 2 million vaping and other non-cigarette tobacco products, had a deadline of Sept. 9, after which companies were supposed to stop selling their wares or face possible FDA enforcement action, which could include fines or seizure.

In August, the FDA ordered three small e-cigarette manufacturers not to sell their flavored products, saying that their applications to market their products did not provide "sufficient evidence" that the benefit to adult smokers outweighed the risk to young people. It called out flavors such as Apple Crumble, Dr. Cola and Cinnamon Toast Cereal.

Since those orders, the FDA has issued denials on more than a million other flavored products, which it said similarly failed to provide evidence that the benefit to public health outweighed the risk.

Although the FDA on Tuesday said the e-cigarettes could help adult smokers reduce or eliminate their use of cigarettes, the agency also cautioned that its authorization for R.J. Reynolds to market the products in the United States hinged on the company's adherence to requirements "aimed at reducing youth exposure and access to the products."

Mitch Zeller, director of the FDA's Center for Tobacco Products, said in a statement that the agency would monitor R.J. Reynolds's marketing of the Vuse products and that if "evidence emerges of significant use" by people who had not previously used tobacco products, including young people, the FDA could withdraw its authorization.

James Murphy, head of scientific and regulatory affairs at Reynolds American, R.J. Reynolds' parent company and a subsidiary of British American Tobacco, said in a statement that the company was "pleased" with the FDA's authorization, which it said gives "adult nicotine consumers" access to "innovative and potentially less harmful alternatives to traditional tobacco products."

The FDA's assessment found that the e-cigarettes' aerosols are significantly less toxic than combusted cigarettes. But in a statement about the authorization, it emphasized that Tuesday's action "does not mean these products are safe or 'FDA approved.' All tobacco products are harmful and addictive and those who do not use tobacco products should not start."

Traditional tobacco companies such as R.J. Reynolds, whose cigarette brands include Camel and Pall Mall, have targeted vaping as an area of growth. Altria, which owns Marlboro maker Philip Morris, also owns a 35 percent stake in Juul, which was once the star of the vaping industry but drew criticism over widespread use of its product by teenagers. Altria has rebranded itself as "moving beyond smoking," transitioning "from tobacco company to tobacco harm reduction company."

Greg Conley, president of the American Vaping Association, a nonprofit entity that advocates for vaping but does not represent the industry, said in a statement that "the importance of the FDA authorizing a vaping product as 'appropriate for the protection of public health' should not be understated."

"Now that the FDA has acted," he said, "we are hopeful that adult consumers and health communicators will begin to understand the harm-reduction benefits offered by these and other smoke-free products."

Rep. Raja Krishnamoorthi (D-Ill.) criticized the FDA's decision, saying the agency "has turned its back on the public health by approving a high-nicotine e-cigarette."

"FDA has ignored the data and missed another opportunity to address the youth vaping epidemic," he said in a statement.

Concerns over the high nicotine content of the Vuse cartridges — 4.8 percent — were echoed by Matthew L. Myers, president of the Campaign for Tobacco-Free Kids. Myers said that although not flavored, the Vuse products authorized by the FDA have "a nicotine content three times higher than is legal in Canada, the UK and Europe, putting our nation's youth [at] an undue risk of addiction."

Vuse is the second-most popular e-cigarette brand among high school students who vape, according to the 2021 National Youth Tobacco Survey. The FDA said it was aware of that figure, adding that it "takes these data very seriously and considered risks to youth when reviewing these products."

In the survey, more than 10 percent of high school students who vape said Vuse was their brand of choice, and about 26 percent said their usual brand was Puff Bar. Among middle-schoolers, Puff Bar was even more popular, with 30 percent saying it was their usual brand, and 12.5 percent normally choosing Juul.

Puff Bar, which sells disposable e-cigarettes in flavors including "Banana Ice" and "Cool Mint," was one of 10 companies ordered by the FDA last year to remove their flavored products from the U.S. market amid what the regulator called "the public health crisis of youth e-cigarette use in America."

Murphy, the Reynolds executive, said that "youth usage of Vuse products is unacceptable," adding that "Vuse products are intended for adult nicotine consumers and remain an important option for those adult smokers seeking an alternative to cigarettes." 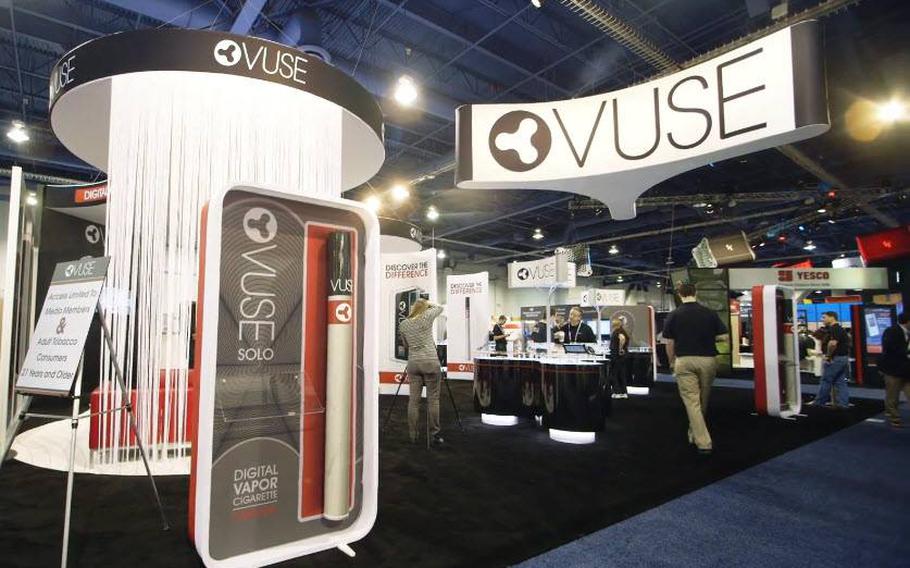