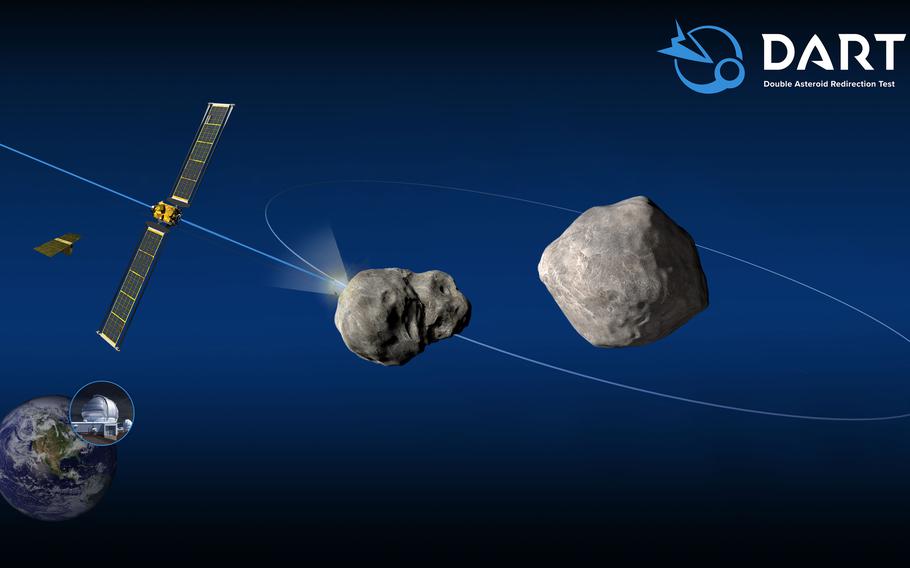 Schematic of the DART mission shows the impact on the moonlet of asteroid Didymos. Post-impact observations from Earth-based optical telescopes and planetary radar would, in turn, measure the change in the moonlet’s orbit about the parent body. ( NASA/Johns Hopkins Applied Physics Lab)

(Tribune News Service) — NASA will launch a spacecraft next month to deliberately crash into an asteroid near earth in an effort to test planetary defense systems.

On Nov. 24, the SpaceX rocket will launch from the Vandenberg Space Force Base in California, beginning a Double Asteroid Redirection Test Mission. This rocket will carry the DART spacecraft, which plans to crash into a small 525-foot diameter asteroid named Dimorphos in September of 2022.

Dimorphos is not expected to travel within a million miles of Earth, however scientists hope the test will provide insight into developing planetary defense systems in case of an emergency.

For the test, NASA is targeting a binary asteroid system near earth called Didymos.

“While the Didymos primary body is approximately 780 meters across, its secondary body (or “moonlet”) is about 160-meters in size, which is more typical of the size of asteroids that could pose the most likely significant threat to Earth. The Didymos binary is being intensely observed using telescopes on Earth to precisely measure its properties before DART arrives,” NASA wrote.

After almost a year in space, the DART will reach the asteroid system, NASA said. When it arrives, the DART will use a camera, called DRACO, and sophisticated autonomous navigation software to crash the spacecraft into Dimorphos at almost 15,000 mph.

This DART test is will be the first demonstration of the “kinetic impactor technique” which tries to change the motion of an asteroid in space. The data collected will help NASA’s planetary Defense Coordination Office in furthering this technology to protect Earth.