The first Columbus Day was born of violence — and political calculation 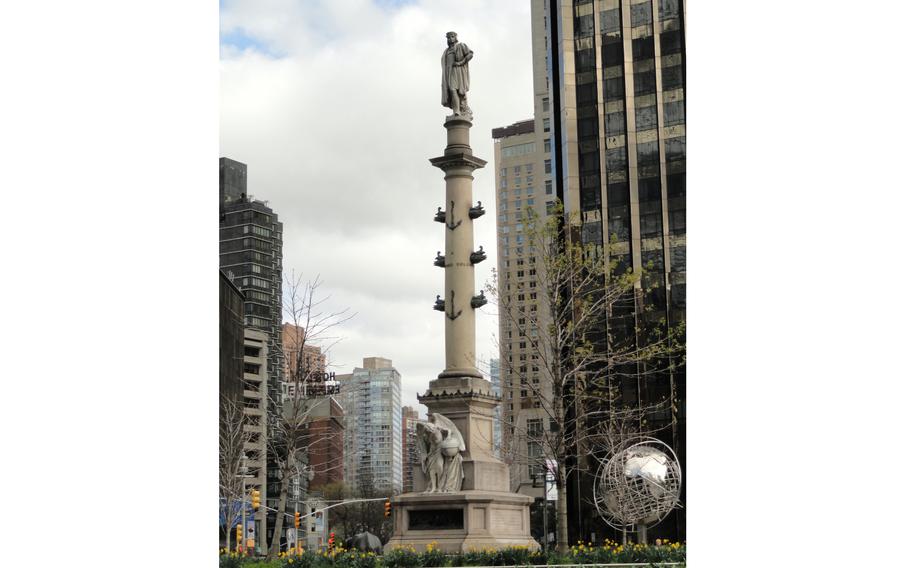 But for Harrison, it served another purpose: to help resolve a diplomatic crisis with Italy — and gain support among Italian American voters — after rioters in New Orleans lynched 11 Italian immigrants the year before.

Columbus Day has come under fire in recent years by critics alleging that Columbus was responsible for the enslavement and massacre of Indigenous peoples. Some cities, including Columbus, Ohio, have pulled down statues of the explorer. And President Joe Biden made history Friday by announcing he would commemorate Indigenous People’s Day alongside the Columbus holiday.

A group of Italian American organizations is countering the attacks on Columbus Day with advertisements denying the claims against Columbus and urging a broader observance of the holiday by “celebrating all Americans.”

The first national Columbus Day grew out of a backdrop of violence. In March 1891, a jury in New Orleans acquitted six Italian immigrants charged with the murder of the local police chief. Rumors spread that jurors had been bribed by powerful Italian families coming to be known as the Mafia.

The next morning, thousands of people — many of them leading citizens of the Crescent City — descended on Orleans Parish Prison, where the six Italian defendants and 13 other Italian suspects were being held.

“ ‘Bring ‘em out, we’ll kill ‘em,’ came the cry from a thousand throats,” the New Orleans Times-Democrat reported. A group of armed men broke into the prison and shot nine of the defendants dead, one falling with 42 bullets in his body, the paper said. The mob took two others to the city square, when one man was hanged on a lamp post and another on a tree.

The article ran under the headline “Avenged.” At a time of widespread discrimination against Italian immigrants, many news reports followed the theme that the killings were justified. The Associated Press said of the killers: “It was not an unruly midnight mob. It was simply a sullen determined body of citizens who took into their own hands what justice had ignominiously failed to do.”

The New York Times wrote that “while every good citizen” would agree that “this affair is to be deplored, it would be difficult to find any individual who would confess that privately he deplores it very much.” U.S. Civil Service Commissioner Theodore Roosevelt, in a letter to his sister, said of the revengeful violence, “Personally, I think it a rather good thing.”

But Italian Americans and leaders of the kingdom of Italy were outraged. Italy broke off diplomatic relations and recalled its ambassador from Washington. The Harrison administration in turn removed the U.S. legation from Rome. There was even talk of war.

Harrison remained silent on the matter until his December message to Congress, when he called the murders “a most deplorable and discreditable incident” and an “offense against law and humanity.” The next April, he agreed to Italy’s demands to pay an indemnity to survivors of three victims who were citizens of Italy.

Secretary of State James Blaine, in a telegram to Italian officials about “the lamentable massacre at New Orleans,” said that at the president’s instruction, the U.S. government would pay a total indemnity of $25,000 — equal to about $760,000 today.

Italy accepted the offer, but Harrison’s action drew criticism. “Peace at Any Price. Uncle Sam Humbles Itself Before Italy,” declared a headline in the Los Angeles Herald. Some lawmakers argued that Harrison exceeded his executive power by acting without Congress’s approval.

With a looming election rematch against former president Grover Cleveland, whom Harrison had defeated in 1888, politics was naturally on the president’s mind. One factor in Harrison’s action was “the approaching Presidential election and the necessity the President feels under of repairing his political fences in every direction,” the Brooklyn Citizen wrote. “He does not want to have the Italian vote massed against him.”

Diplomatic relations with Italy resumed, but the Italians were still upset that the United States didn’t prosecute the murderers.

The calendar provided an opportunity to further placate the Italians. Many communities already were planning to celebrate the 400th anniversary of Columbus’s arrival in the New World.

A New York minister, Francis Bellamy, met with Harrison to urge a national holiday to promote patriotism among American schoolchildren. Bellamy, a self-described Christian socialist, had written “The Pledge of Allegiance” for the occasion.

With Harrison’s support, Congress passed a resolution calling for a one-time holiday for Americans to celebrate Columbus on Oct. 21 “by public demonstration and by suitable exercises in their schools and other places of assembly.” Harrison issued his proclamation on July 21, urging efforts to “impress upon our youth the patriotic duties of American citizenship.”

Celebrations took place across the country. The biggest was in New York City on Oct. 12, the date that Columbus had first made landfall in the Western Hemisphere when he arrived in the Bahamas. More than 1 million spectators cheered a parade featuring 40,000 marching military men in uniform, the New York World reported. The New York Times called the turnout “the greatest crowd New York ever held.”

An army of 1,000 Native Americans brought up the rear of the parade, the New York Times said. They were on foot and wore the “every-day stage style of Indian costume with red blankets, painted faces and feathered head gear.”

The next day, a crowd gathered for the unveiling of a 14-foot statue of Columbus atop a 27.5-foot granite column. The statue at Columbus Circle still stands.

Harrison wasn’t able to take political advantage of the celebrations. He declined an invitation to attend the New York City festivities because his wife, Caroline, was dying of tuberculosis. The following week, he bowed out of the groundbreaking for the 1893 Columbian World’s Fair in Chicago.

Cleveland also canceled his visit to the World’s Fair out of deference to Harrison. But the former president had a front-row seat on the reviewing stand at the New York City parade. The next month, Cleveland defeated Harrison to become the only president ever to be elected to two nonconsecutive terms.

Columbus Day became a permanent national holiday in 1934 when Congress, after lobbying by the Knights of Columbus, authorized President Franklin Roosevelt to declare Oct. 12 as the designated date. In 1971, Columbus Day was made a federal holiday on the second Monday in October.

That year, celebrations again took place across America, but in San Francisco, 30 Native Americans protested. Their leader, wearing a Chippewa tribe ceremonial headdress, called Columbus Day a day of mourning for Indians until “we are given the same opportunity to achieve the same social, economic and educational levels as the rest of those who call themselves Americans.”