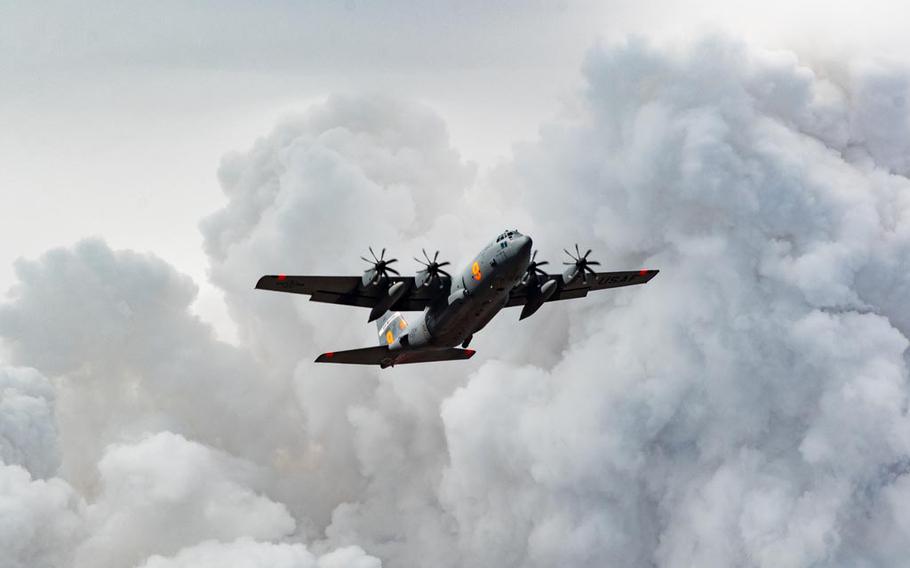 An Air National Guard C-130 out of Reno, Nev., flies over plumes of smoke after dropping fire retardant on the Beckwourth Complex Fire on July 9, 2021 near Frenchman Lake in Northern California. Military aircraft fighting fires this year had the second-busiest season on record since the Modular Airborne Fire Fighting Systems program was established in the 1970s. (Paula Macomber/U.S. Air National Guard)

The crews were part of a program that converts military C-130 aircraft into air tankers able to disperse fire retardant. The military planes are the last line of defense, used when all commercial tankers that combat wildfires are unavailable.

That’s the second-highest total since the MAFFS program was established in the early 1970s, and it was surpassed only during the 1994 fire season. 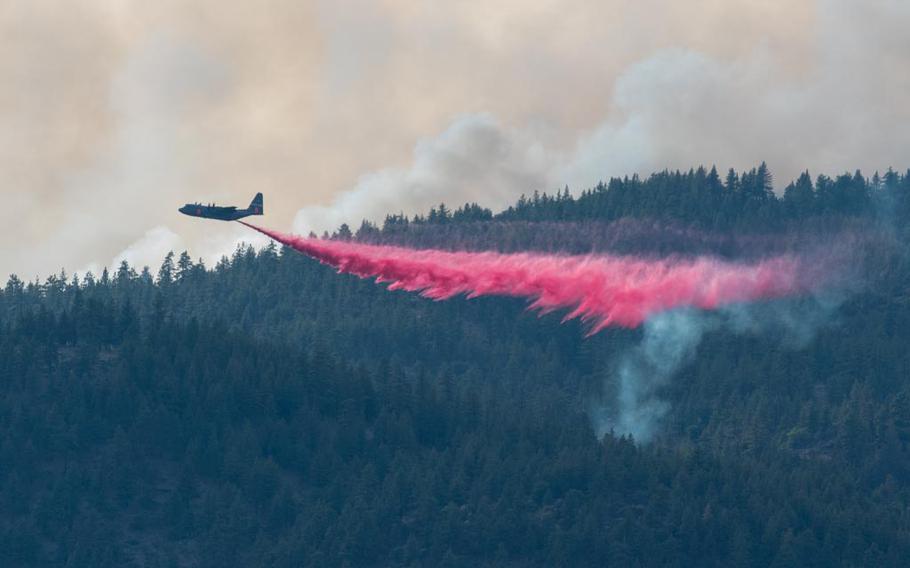 An Air National Guard C-130 out of Reno, Nev., drops fire retardant on the Beckwourth Complex Fire on July 9, 2021 near Frenchman Lake in Northern California. Military aircraft are generally asked to join firefighting efforts when all commercial air tankers are already at work or unavailable. This was one of the busiest years for military firefighting aircraft on record. (Paula Macomber/U.S. Air National Guard)

Much of this year’s efforts focused on containing the Dixie Fire in Northern California, the second-largest wildfire in the state’s history. It destroyed about 1 million acres, according to state data.

Military C-130s were also used to help the U.S. Forest Service and other federal agencies contain other blazes in the state, including the Caldor, Antelope, River Complex, Monument and French fires, the Air Force said last month.

At one point in August, all eight aircraft assigned to the MAFFS program were being used simultaneously to support the joint effort, the U.S. Northern Command statement said.

That hasn’t happened in nearly a decade despite eight of the 10 biggest wildfires in California’s history occurring in the past five years.

“This was an exceptional year that saw each unit contribute to a highly successful interagency firefighting effort,” Lt. Gen. Kirk Pierce, the commander of Air Forces Northern, was quoted in the statement Monday as saying.

Still, the Dixie Fire alone devastated an area larger than the state of Rhode Island and claimed over 1,300 buildings, California state data show.

Hundreds of other soldiers and airmen have also assisted firefighting efforts, both on the ground and in different aircraft, NORTHCOM said.

C-130s assigned to the MAFFS program were first requested in late June, a month earlier than in 2020, marking the earliest request in about a decade.

However, all eight of the program’s aircraft were used simultaneously only for a few weeks at most during the 96 consecutive days MAFFS was activated.

No plans are in the pipeline to increase the number of C-130s in the MAFFS fleet, NORTHCOM spokesman Capt. Nathanael Callon told Stars and Stripes. Climate scientists have stated that increasingly large fires will likely continue to batter the Western U.S. in the coming years because of climate change.

The U.S. Forest Service contracts with private companies to provide tankers to drop fire retardant as part of wildfire suppression efforts. But during periods of high activity there often aren’t enough of these contracted airtankers to meet demand, according to the Forest Service.

When needed, the Modular Airborne Fire Fighting System is inserted into the military C-130s without any major structural modifications to the planes.

The system consists of a series of five pressurized fire-retardant tanks and associated equipment that can be carried in the aircraft’s cargo bay and drop up to 3,000 gallons in less than 10 seconds.

The systems belong to the Forest Service, but the C-130s and their crews must be pulled from their regular military duties with the Air National Guard or Air Force Reserve.