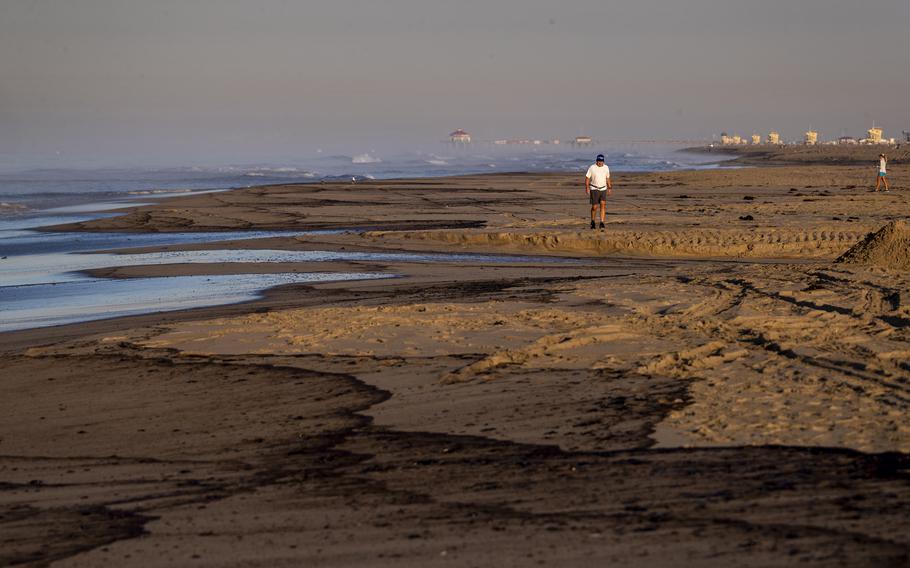 LOS ANGELES (Tribune News Service) — A huge slick of oil stalked the California coast Tuesday as officials frantically tried to protect ecologically sensitive shorelines and investigators probed whether a ship’s anchor caused a pipe breach that sent tens of thousands of gallons of crude into the waters off Orange County.

The oil continued to move south after fouling beaches and wetlands in Huntington Beach on Sunday. While much of it remained off the coast, some did wash up in Laguna Beach on Monday. The county on Tuesday announced that it had closed the Dana Point Harbor and Baby Beach, which is located within the harbor, as the oil spill continues to move south along the coast.

A map from the National Oceanic and Atmospheric Administration projecting the movements of the oil spill, reviewed by the Los Angeles Times, indicated the greatest threat to the shore remains in the area between Huntington Beach and Laguna Beach.

Officials involved in the spill response believed that as of Saturday evening, the oil had reached San Diego County, according to materials obtained by The Times.

The spill was initially estimated at about 126,000 gallons of crude, but late Monday, state and federal officials said that number could be closer to 144,000 gallons.

Coast Guard officials are flying over the spill three to four times a day to map the oil’s direction and compare it with tides, currents and winds to project the potential impact to beaches to the south.

“It really is dependent on the prevailing weather conditions, but the oil continues to move in a southerly direction,” said Capt. Rebecca Ore, commander of the USCG Sector Los Angeles-Long Beach.

Ore said the oil was detected as far south as Dana Point on Monday afternoon, but it was not a large mass.

“I would characterize it as isolated ribbons of oil, or patches of oil. It’s constantly changing,” Ore said. “It’s not one large slick of oil covering this large area of miles.”

Late Monday, Gov. Gavin Newsom declared a state of emergency in Orange County to help with cleanup efforts. The Orange County Board of Supervisors will also consider enacting a declaration of emergency response during its meeting Tuesday. If passed, it would allow the county to seek reimbursement for cleanup and other efforts from the entity responsible for the leak.

Huntington Beach has been the hardest hit, with oil fouling some marshes and wetlands. Orange County Supervisor Katrina Foley said she took a flight over the affected area and it didn’t appear the oil was encroaching as much as previously feared into the Huntington Beach area, but it could move as far south as the Mexican border.

“As the ocean moves, so goes the oil,” Foley said.

Fourteen boats are working in the waters along the coast to recover oil before it washes ashore. As of Monday afternoon, more than 4,100 gallons of oil had been removed from the water. Officials deployed 8,700 feet of oil-containment barriers, called boom, to protect the coast, according to the Coast Guard.

On Tuesday morning, anti-pollution vessels were seen off the coast of Huntington Beach, south Laguna Beach and Dana Point. Officials in Laguna Beach hoped the skimmers would prevent more oil from coming ashore.

“The entire city is a marine-protected area, which means we have sensitive marine habitat and wildlife here that is protected, and we need resources to protect this unique ecosystem,” said Kevin Snow, chief of marine safety for Laguna Beach.

The Coast Guard is investigating whether a large commercial ship set anchor in the wrong location, damaging an oil pipeline and causing the massive Orange County oil spill, an official familiar with the investigation told The Times on Monday. The source spoke on the condition of anonymity because they weren’t authorized to speak publicly.

The anchor dragged the pipeline as much as 150 feet, the official said. Vessels are given anchor points in order to avoid pipelines. Coast Guard investigators are examining whether the ship’s captain was aware of the dragging.

Earlier Monday, Martyn Willsher, president and chief executive of the pipeline operator’s parent company, said that a ship’s anchor striking the pipeline was “one of the distinct possibilities” for the spill.

“We have examined more than 8,000 feet of pipe, and we have isolated one specific area of significant interest,” Willsher told reporters. “There’s more information to come, but I think we’re moving very closely to the source and the cause of this incident.”

The spill, first reported Saturday morning, originated from a pipeline running from the Port of Long Beach to an offshore oil platform known as Elly. The failure caused roughly more than 100,000 gallons of oil to gush into the Catalina Channel, creating a slick that spanned about 8,320 acres.

It has left crude along stretches of sand in Newport Beach, Laguna Beach and Huntington Beach, killing fish and birds and threatening ecologically sensitive wetlands in what officials are calling an environmental catastrophe.

The oil will likely continue to encroach on Orange County beaches and environmentally sensitive habitats for the next few days, officials said.