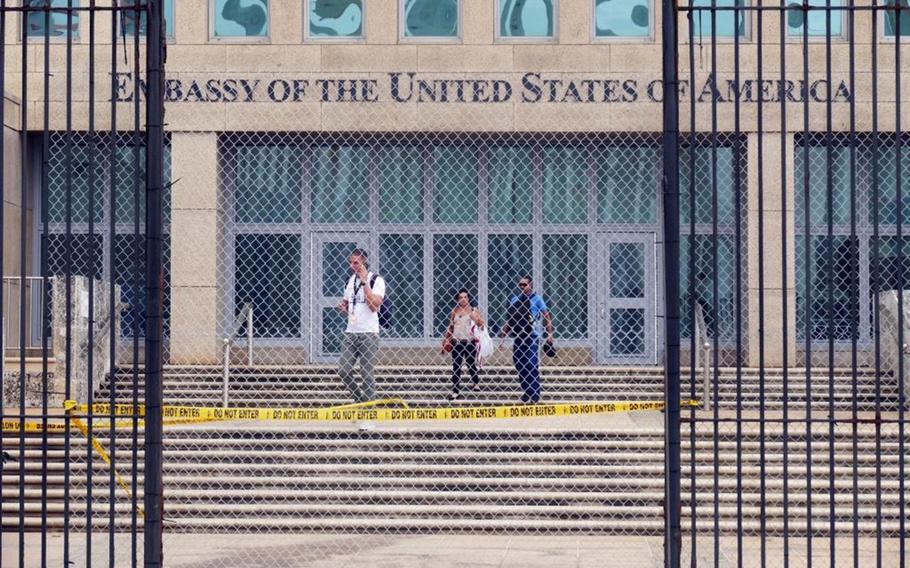 The U.S. Embassy in Cuba when it was being shut down amid a wave of mysterious medical symptoms in 2016. (Emily Michot, Miami Herald/TNS)

WASHINGTON (Tribune News Service) — National security officials at the White House were recently issued a warning: move away from the immediate area as soon as possible if you ever feel the acute onset of pressure, sound or heat in the head.

In brown bag lunches over the past week, policy staff at the Pentagon have been instructed to report any strange, sudden health symptoms without delay.

The U.S. government is sending a message to diplomats, national security staff and intelligence officers that “anomalous health incidents” — also known as “Havana syndrome” because it was first detected in Cuba — are serious, widespread and pose real danger to their health at home and abroad.

The new workplace guidance is part of a broader strategy by the Biden administration to act with greater speed on reported cases, after finding that quicker action benefits the health of the victim and the investigation of the incident.

It is a shift in the U.S. response after years of skepticism in some corners of government about whether the strange health incidents are real and connected.

“We need to believe our personnel who are coming forward,” a senior administration official said. “People are facing real symptoms. We are very conscious that people are experiencing something very real, and it is having a real negative effect on their health. And we’re seeing better health outcomes the sooner we can respond to that.”

The official disputed that the syndrome may have been “mass hysteria,” saying, “The physical effects we’ve seen in several cases are very, very real.”

The administration’s firm rejection that mass hysteria could explain the phenomenon comes as the theory has resurfaced in recent days, after a 2018 scientific report commissioned by the State Department was declassified and obtained by BuzzFeed.

And the new government guidance comes amid continued criticism from victims, lawmakers and diplomats that the State Department response, in particular, has been slow throughout the first nine months of the Biden administration.

In late September, a top State Department official overseeing its response to the phenomenon — who refused to rule out the possibility that mass hysteria was to blame in a conversation with victims — left her post amid internal disagreements with other Biden appointees, two officials told McClatchy.

While some cases after review do turn out to be unrelated to “Havana syndrome,” there are enough convincing cases to establish a clear pattern, officials say.

Recent guidance to intelligence officers, military personnel and national security officials at the White House directs them to leave their immediate location with everyone around them as soon as they can if they feel symptoms.

The Pentagon invited personnel to brown bag lunches to increase awareness of the phenomenon and how to report it. They were told not to ignore symptoms, to take it seriously and to be assured they would not be stigmatized if they came forward with a case.

U.S. officials have reported experiencing symptoms in Vietnam, Austria, Britain, Cuba and China, as well as the Washington area.

“This administration believes that those affected by anomalous health incidents are to be believed, heard, and respected,” a second senior administration official said. “We take each report we receive of an anomalous health incident extremely seriously, and we are bringing the U.S. government’s full resources to bear to determine the cause of these incidents and identify any foreign actor involved.”

Top officials in the administration of former President Donald Trump were divided over whether the phenomenon was real.

The 2018 scientific report commissioned by then-Secretary of State Mike Pompeo found that a cluster of cases involving more than 20 personnel at the U.S. Embassy in Cuba in 2016 was likely a “psychogenic” incident — a psychological, rather than physical, phenomenon. A spokesperson for Pompeo did not respond to requests for comment.

U.S. officials now say the scientists behind that study had limited access to victims and evidence, and that new information has emerged since then. A 2020 study by the National Academy of Sciences, also commissioned by the Trump administration, said directed microwave energy was most likely causing the health incidents, but more research was necessary for a conclusion.

Those in the Trump administration who believed the phenomenon was real suspected Russia was the culprit. But they were left with the impression that Trump did not want to hear about it.

“He was aware of it, but because of the whole problem with Russian collusion, until we had something more definite or actionable, I and others thought it would be counterproductive to keep raising it with him,” John Bolton, national security adviser under Trump from 2018 to 2019, said in an interview.

Fiona Hill, who was senior director for Europe and Russia at the National Security Council from 2017 to 2019, said the government had a working theory that Russia was responsible at that time.

“There was a sense that Russia was the most likely culprit,” Hill said. “It fits into a long pattern of behavior — their use of poison, the Novichok, their use of cyber — and there aren’t many other countries that would have this technology. I think they quite enjoy it.

“But when I was there, as far as I know, there was no certainty,” Hill added. “I regret we didn’t know more at the time.”

Victims previously complained they were receiving insufficient care or were not being taken seriously. The Biden administration’s response has been to standardize the reporting process and encourage self-reporting as early as possible.

The National Security Council established two panels of experts this spring to investigate the mechanism behind the events, and how to protect U.S. personnel going forward.

“First and foremost, they want to be believed, and they want agencies that they work for to take care of them — make sure they get treated, make sure that they get the benefit of the best medical advice right away,” House Intelligence Committee Chairman Adam Schiff, D-Calif., told McClatchy.

Schiff co-authored the Helping American Victims Afflicted by Neurological Attacks Act of 2021, or the HAVANA Act, which passed Congress last month and Biden plans to sign into law. It would subsidize care for victims and require the administration to report to Congress on the episodes.

The issue was raised during Biden’s summit with Russian President Vladimir Putin in Switzerland in June, according to a senior State Department official.

Throughout the Trump administration and at the beginning of Biden’s term, officials suspected the health incidents could have been the byproduct of an intelligence collection operation — that a device meant to pick up data from an individual’s cellphone was inadvertently causing harm.

But government sources say the circumstances around recent cases suggest a greater strategic purpose of disrupting and disturbing U.S. personnel.

“Maybe there’s more evidence on it now,” Bolton said. “It was more of a concern if they are targeting individuals directly, and they can do it at our embassies and consulates around the world. They can do it in peoples’ homes in Washington. They can do it a couple blocks from the White House.”

Officials say that while progress has been made in the investigation, they are far from reaching any public conclusions.

It is unclear whether the results of the latest government study, overseen by the Director of National Intelligence and the CIA, will ever become public.

“But none of those things prevent you from responding,” Schiff added. “If we do find that these are deliberate attacks on our personnel, then the consequences need to be very, very severe.”