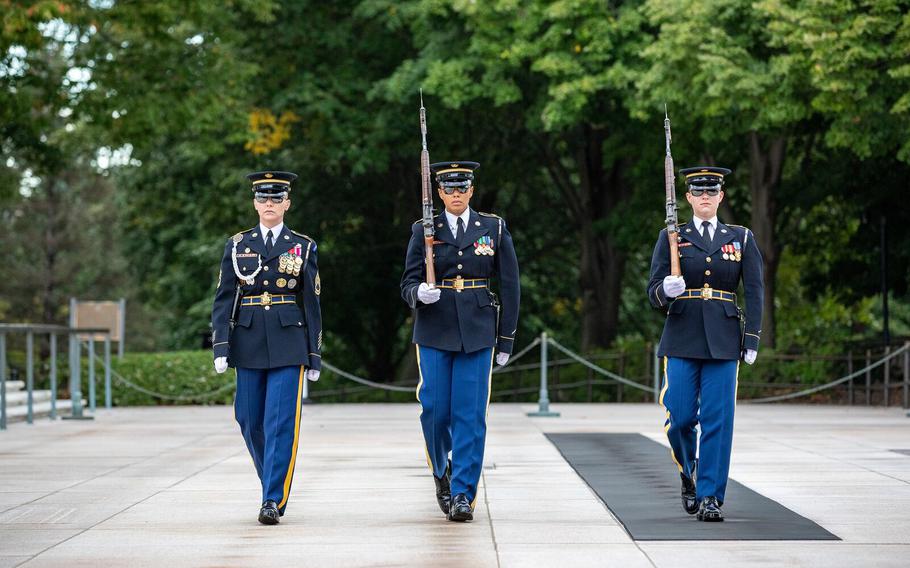 For the first time in history, an all-female guard change occurred with the 38th Sergeant of the Guard at the Tomb of the Unknown Soldier at Arlington National Cemetery. (Gabriel Silva/U.S. Army)

WASHINGTON D.C. (Tribune News Service) — An all-women led guard change on Friday marked a historic first for the Tomb of the Unknown Soldier.

The Tomb at Arlington National Cemetery in Virginia has been guarded continuously by members of the military for 84 years.

The ceremonial changing of the guard takes place “every hour on the hour” between Oct. 1 and March 31 and “every half hour” between April 1 and Sept. 30, according to the Arlington National Cemetery website.

But on Oct. 1, for the first time in the Tomb’s history, there was a shift change comprising only women, according to the 3rd U.S. Infantry Regiment (The Old Guard).

Leaders from The Old Guard say this is the first time that has taken place in the Tomb’s nearly 100-year history.

Arlington National Cemetery is also planning a 100-year celebration of the Tomb of the Unknown Soldier in time for Veterans Day.