As students with long-haul COVID return to school, many districts don’t fully know how to help 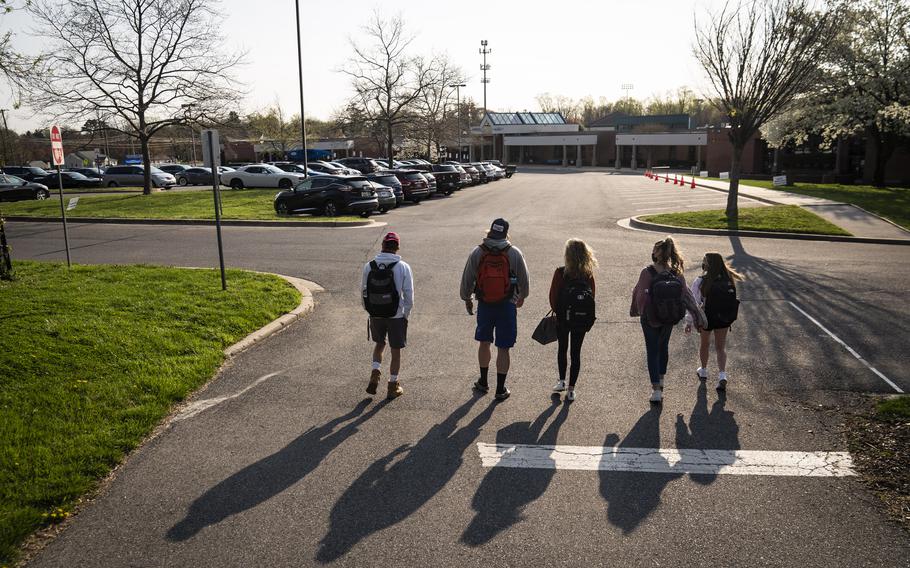 Senior students catch up as they return to in-person school for the first time this year at Sherwood High School in Maryland in April 2021. (Jabin Botsford/The Washington Post)

At the start of the school year, 9-year-old Harli Hecht pulled out a set of rainbow-colored markers and crafted a letter to her fellow fourth-graders.

“My name is Harli, and I’m in your class,” she printed on blue poster paper. “I am learning at home. I have two sisters and three dogs. Please write back to me when you have the time.”

The note, now hanging in what should have been her classroom, represents the only meaningful contact Harli has had with other students since lingering COVID-19 symptoms forced her into homebound learning this fall. The headaches, fatigue and emotional outbursts that have plagued Harli for more than a year have since kept her from participating in normal classroom learning or virtual instruction.

Harli’s mom, Brandi Hecht, said she’s frustrated by what she sees as the school district’s haphazard approach to students with long COVID, a relatively new diagnosis characterized by post-infection symptoms that is rare but growing, doctors said.

“They kind of look at Harli like she’s only one child, instead of them looking at the bigger picture,” Hecht said of district officials. “There could be many other children in your school system that go through this or will go through this.”

As students return to classrooms, families and educators are maneuvering the uncharted territory of trying to support children with long-haul COVID. The responsibility further burdens an already overstressed educational system juggling teaching with trying to prevent day-to-day coronavirus transmission. Families, meanwhile, are scrambling to seek accommodations for an unfamiliar medical condition whose symptoms could change within weeks.

Estimates of how many children suffer from long COVID vary widely. A study of more than 1,700 British children published in August found that long COVID in children happens infrequently, with 4.4 percent of children reporting symptoms lasting longer than four weeks and 1.8 percent having symptoms that last eight weeks or longer. A smaller study in Rome found that over half of infected children surveyed more than 120 days later still had at least one symptom — though the researchers only followed up with 68 of the 129 children in the study.

In the United States, more than 5.7 million children have tested positive for the coronavirus, according to the American Academy of Pediatrics. While the number of children hospitalized has hit record highs in recent months with the delta variant, severe illness due to COVID-19 in children remains rare.

The number of U.S. children who continue to have symptoms after a COVID infection is unknown, but doctors said for some of them, issues including fatigue, headaches, muscle pain and difficulty concentrating can endure for months, complicating daily activities and interfering with learning. With most U.S. children back in classrooms for the first time since the coronavirus pandemic began, those challenges have become more apparent.

During virtual learning, students with long COVID could participate from their beds or lie down during breaks between classes. Now, doctors say many are struggling to navigate the plastic desks, classroom switches and in-person social interactions that two years ago were normal. Accommodations like increased test-taking time, modified movements in physical education and additional minutes to switch classrooms make it feasible for some long-haul students to keep learning in person.

Not all schools are eager to grant those adaptations, said Amanda Morrow, co-director of the pediatric post-COVID clinic at the Kennedy Krieger Institute in Baltimore. Some school officials ask doctors whether children even can have long-haul COVID, she said, while others are more motivated to learn how they can help.

Incentives for administrators to focus their energy elsewhere are numerous. As the delta variant continues to run rampant, officials are managing contact tracing, quarantines and mask policies, sometimes while facing public opposition. Administrators worry about students who fell behind during a year of virtual learning. Many teachers are leading both in-person and virtual instruction while watching students for signs of illness or emotional trauma from the pandemic’s tumult.

Against that backdrop, schools are struggling to figure out how to support students with long-haul COVID.

In Dallas, the public school district is not aware of any students with long COVID, said Jennifer Finley, its executive director of health services. With the priority of preventing day-to-day coronavirus transmission — including with a mask mandate, contact tracing and deep-cleaning buildings — she said officials have struggled to make time to plan for potential long-haul cases.

If a parent flagged that a child’s lingering COVID symptoms could interfere with learning, Finley said their principal and school nurse would work with them to develop accommodations. They would also have to collaborate closely with the child’s doctors, she said, because long COVID is a relatively new disease and symptoms vary widely.

“This is such uncharted territory because it’s not one of your more common pediatric illnesses that you would see in a school setting,” Finley said. “This is so new, and we’re still continuing to learn about it.”

In July, the Biden administration announced that long-haul COVID-19 could be considered a disability under federal guidelines. The Department of Education released guidance outlining when children with this condition could be eligible for school accommodations — either modifications to instruction or changes in how the student receives that instruction — under the Individuals with Disabilities Education Act or Section 504 of the Rehabilitation Act of 1973.

But figuring out the right framework for supporting students with long COVID is complicated, especially because the diagnosis is new and little is known about how symptoms may change over time.

“If a kid is struggling in class because of symptoms of long COVID, is that an acute disorder? Do we think that that’s going to get better in a few months?” said Kris Scardamalia, a professor at the University of Maryland School of Medicine and former school psychologist. “Or is this a chronic disorder where we have to think about putting in long-term supports? I don’t think anybody can answer that.”

“Schools are going to need a lot of time and space for problem-solving,” she said. “And we’re going to have to go student by student.” 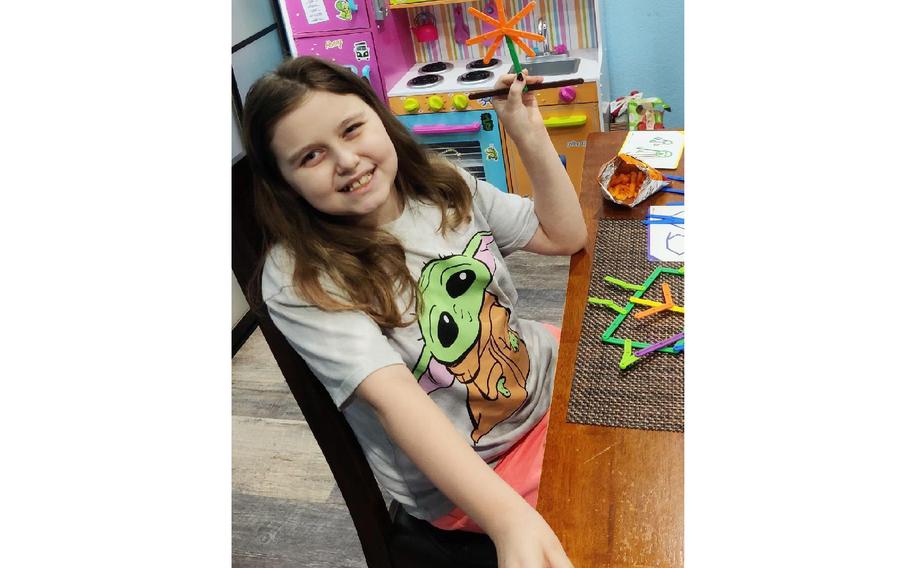 The Hecht family’s quest for school accommodations began a few months after Harli got COVID-19 in June 2020, a tumultuous journey that hospitalized her and left her needing oxygen for months. While her fever broke and the vomiting stopped three weeks later, she never fully recovered, Brandi Hecht said.

Harli, who has underlying medical conditions, completed the third grade through a modified version of virtual learning. She had trouble looking at computer screens, so her mom said they picked up printed packets of assignments from the school and Harli’s teacher asked her test questions verbally.

Now, while most of her classmates have returned to school buildings, Harli receives at-home instruction from a teacher who visits the family’s Las Vegas home twice a week. Although Hecht is satisfied with the homebound learning, she said that delays in making the arrangements caused Harli to start the year two weeks late and that they both feel disconnected from the school community.

“I have no idea what her fourth-grade class is doing,” Hecht said.

Some families have had an easier time getting help for their long-haul children. In the same district, Rochelle Rankin said she worked with her daughter Katie’s school to create a Section 504 plan with accommodations for the 16-year-old’s medical needs. Although Rankin said one of the school counselors had never heard of long-haul COVID when they began communicating, administrators quickly agreed to accommodations after getting a diagnosis from Katie’s pediatrician.

Now attending in-person classes after a year of virtual learning, Katie’s Section 504 plan allows her extra time on assignments to compensate for her brain fog and permission to be late to class because of her persistent leg pain. Rankin said she talks with Katie’s counselor about once a month and they plan to revaluate her Section 504 plan a year after it began.

After several months with the accommodations, Rankin appreciates having the school’s responsibilities in writing. Katie, she said, is less pleased.

“When we got the 504, she specifically asked, ‘Do I have to use this?’” Rankin said. “And I said, ‘No ... but this gives you some protection in case you have one of these migraines or you have one of those episodes where you can’t get out of bed for three days.’”

As clear as some students’ symptoms are, other children may not realize when long COVID is making learning harder for them. Teachers may be the first to realize there’s an issue, but in-house training about how to recognize the signs appears to be uncommon.

To prepare educators to recognize long-haul symptoms, nurses from Kennedy Krieger’s Specialized Health Needs Interagency Collaboration have been giving presentations and distributing a handout about how the condition manifests and ways schools can respond. Their main message is that although long COVID is a new diagnosis, the symptoms — and therefore, the necessary accommodations — overlap with those of other well-understood medical conditions, said Megan Roesler, a nursing staff educator for the group.

But attending those trainings takes time, which for school officials has been in short supply since the pandemic began. Developing sweeping plans around COVID long-haulers will continue to be difficult as long as COVID-19 remains an acute crisis, educators and experts said.

“I think right now, it’s so difficult to see the forest from the trees,” said Finley, of the Dallas school district. “We’re just operating the day-to-day.”