Outdated White House situation room is getting a needed overhaul 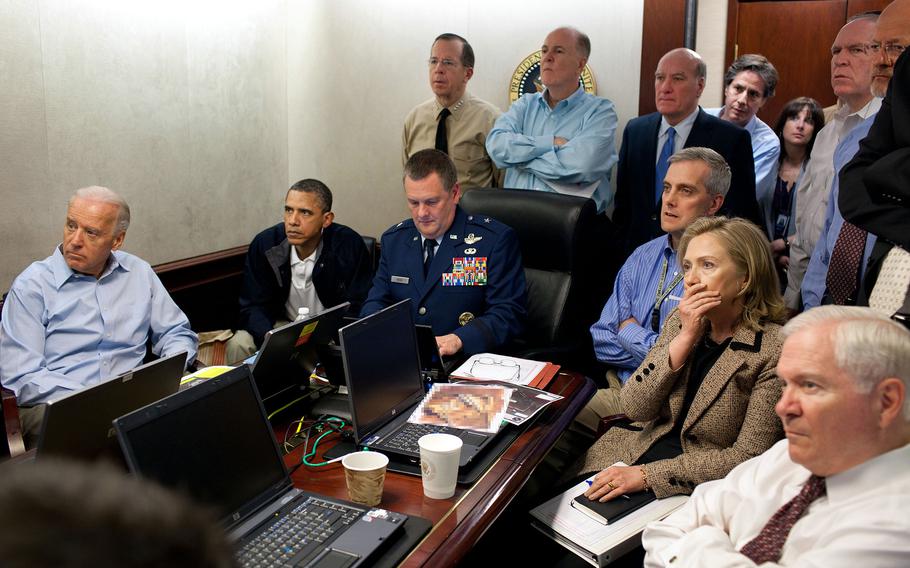 In this handout image provided by The White House, President Barack Obama, Vice President Joe Biden, Secretary of State Hillary Clinton and members of the national security team are said to receive an update on the mission against Osama bin Laden in the Situation Room of the White House on May 1, 2011, in Washington, D.C. (A classified document visible in this photo was obscured by The White House. (Pete Souza, The White House/TNS)

But the Situation Room is also a technology throwback, with some equipment that hasn’t been updated in 15 years.

Now the Pentagon has proposed shifting almost $46 million previously approved for other programs to accelerate an ongoing overhaul, adding to about $44 million backed by Congress for the project since fiscal 2017 and $10 million requested for fiscal 2022, according to Pentagon budget documents.

The Situation Room is actually a series of rooms, a command center on the lower level of the White House’s West Wing for the president and senior administration officials to conduct secure briefings and calls.

“Sit Room” staff provide 24-hour monitoring of international developments, according to the nonprofit White House Museum. A person familiar with the operation, who discussed the secure facility on condition of anonymity, said its staff also connects calls with heads of state and monitors major domestic events.

Funds are required for renovations that will “update the security and technology” since the last renovation in 2006, including “audio-visual improvements to enable broadcast quality display and production capability to include flexible infrastructure for rapid upgrades,” according to a Defense Department budget document for fiscal 2022.

The money sought for improvements “will continue to upgrade and secure critical systems that support classified voice, data and video used in the White House Situation Room and throughout the National Security Council” for the president, vice president and senior staff, according to the document.

Not surprisingly, much of what that spending will support is classified, like the full capabilities of the Situation Room itself.

Some of the funding would also upgrade systems used at locations outside Washington, known as “Continuity of Government” sites, that were created during the Cold War in case of a catastrophic attack on the nation’s capital.

The Pentagon request to shift funds to the Defense Information Systems Agency for the Situation Room is part of a “reprogramming” request for unspent fiscal 2021 funds that Congress is reviewing. In addition, $10 million is being requested as part of the still-pending fiscal 2022 budget, according to agency spokesman Dillon McConnell.

Intelligence agencies also are participating in the upgrade and its funding, the person familiar with the project said. The multilayered system includes equipment such as servers at off-site locations and is protected by layers of backup, encryption and hardening against physical attack, the person said.

The Situation Room has been the site of many tense and historical moments since it was created in May 1961 “out of frustration on the part of President Kennedy after the failed Bay of Pigs invasion,” according to the White House Museum.

During President Donald Trump’s term, the White House released an October 2019 photo of him in the Situation Room watching the commando raid that killed al-Baghdadi, the Islamic State leader, in Syria.

It also has been the site of less momentous events. In December 2017, it’s where Trump’s chief of staff, John Kelly, fired Trump adviser and former “Apprentice” celebrity Omarosa Manigault Newman. Despite the room’s reputation for tight security, she secretly taped the conversation.

This year, Biden and his team were gathering for an update on the airlift evacuation from Afghanistan when he learned of the Aug. 26 terrorist attack at Kabul airport.

“As the president arrived in the Situation Room, one of the first updates he received, of course, was about the attacks on the ground in Kabul,” Press Secretary Jen Psaki said at the time. Commanders on the ground and the region, using the secure communications link to the nerve center of the White House, gave Biden briefings as updates rolled in.

The most famous photo was what then-White House Photographer Pete Souza called “Frame 210” taken on May 1, 2011: President Barack Obama and his National Security team watching a live drone video beamed into a laptop and listening to a satellite-radio feed of the Seal Team 6 raid that killed bin Laden, the mastermind of the Sept. 11 attacks.

The image shows Obama and top advisers crammed together in a small room.

Air Force Lt. Gen. Brad Webb, who was then a one-star general, explained in an interview how that came about.

Webb, who’s now the three-star commander of the Air Education and Training Command, said he was told by White House staff that he wasn’t authorized to have access to the president but “you can set up your stuff. If we have a question, we’ll come get you.” So Webb and a tech sergeant operated a laptop in a small annex in the Situation Room complex to monitor the raid in Pakistan.

Then “everybody kind of naturally migrated,” and “they float in over the series of the hours,” he said. First was then-Vice President Biden, who asked “Hey General, what’s going on?”

“I kind of walked him through what he can expect,” Webb said.

Then “it kind of got busy,” Webb said. He said he looked around and found, “Whoa, everybody’s in here,” including Obama, who let Webb keep his seat. Webb is seen in uniform in the center of the White House photo.

“I spent a lot of time explaining to them what was going to occur” but “as more people came in, I just unplugged” the laptop headset “so they could hear the audio.” That included the now famous “Geronimo EKIA” call sign by a commando on the ground signaling that Bin Laden was dead.

Souza later wrote that “the president stood up to shake hands with General Webb and a few others” but “there was no cheering or fist-bumping. It was an oddly subdued reaction to a historic moment.”