After 15 years as a San Diego tourist draw, rusty Soviet sub is headed to the scrap yard 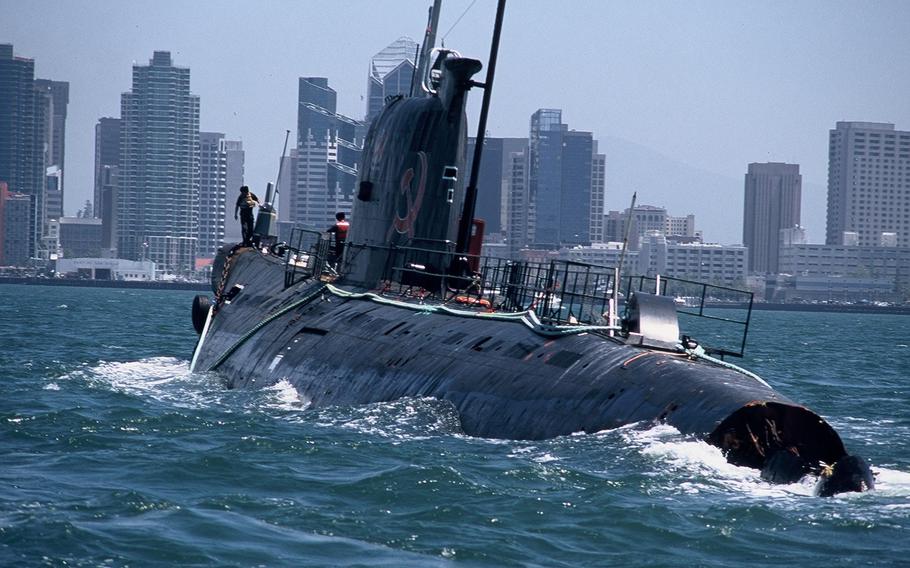 SAN DIEGO (Tribune News Service) — For 15 years, visitors to the Maritime Museum on San Diego’s downtown waterfront could climb aboard a retired Soviet attack submarine known as B-39 and learn about the hidden world of undersea warfare.

Now the sub is destined for a place where it will disappear for all time — the scrap yard.

The outer skin of the 1970s-era Foxtrot-class vessel has been deteriorating for some time, its once sleek black profile disfigured by holes, rust and orange protective netting. Salt water and the occasional severe storm have not been kind.

Museum officials said the sub is not as bad as it looks — that the pressure hull remains stable, making B-39 as seaworthy as it was when it debuted at the Embarcadero in 2005.

“But that doesn’t make its condition cosmetically acceptable in so prominent a location,” said Raymond Ashley, president and CEO of the museum.

It detracts, he added, from the beauty of the other ships in the museum’s collection. They include the iron-hulled sailing ship Star of India, the steam ferry Berkeley, the replica frigate HMS Surprise, and another submarine, the USS Dolphin.

So B-39, closed to the public since the coronavirus pandemic started more than a year ago, is headed to Ensenada, where it will be scrapped and recycled, Ashley said. The museum is awaiting approval from the U.S. Coast Guard for a towing permit.

Although it was never the most celebrated of the museum’s holdings, the 300-foot-long sub proved popular with tourists — so popular that what had been planned initially as a two-year stay in San Diego got extended indefinitely.

Visitors immersed themselves in “To the Brink of War,” a dramatic exhibit based on events during the October 1962 Cuban Missile Crisis, when other Foxtrot submarines armed with nuclear-tipped torpedoes got into a nervy cat-and-mouse game with U.S. Navy ships lobbing practice depth charges.

B-39 also had its moment in the Hollywood sun. In 2013, it was used to film large chunks of “Phantom,” a box-office dud starring Ed Harris and David Duchovny.

This was believed to be the first movie about a submarine actually filmed on one. Some of the cast and crew could attest to the realism — they suffered from claustrophobia during the three weeks they spent working in the cramped quarters.

“Phantom” was based loosely on another bit of history, this one involving the Soviet submarine K-129. It sank in deep waters off Hawaii in March of 1968, setting of a search that the Soviets eventually abandoned but the U.S. pursued with the clandestine help of reclusive billionaire Howard Hughes and a ship called Glomar Explorer. In 1974, it retrieved part of the sub.

To Maritime Museum visitors, the B-39 got some of its goose-bump appeal from the likelihood that the sub, when it was active, spent a fair amount of time stealthily stalking U.S. Navy ships homeported in San Diego.

Launched in 1967, the diesel-electric powered sub spent about 20 years in the Silent Service while assigned to the Soviet Pacific fleet and based in Vladivostok. It carried 78 crew members, 24 torpedoes, and could dive to 985 feet. The museum’s website describes it as “low-tech but lethal.”

After the Soviet Union collapsed in 1991, various pieces of military hardware wound up in private hands. B-39 was sold in the mid-1990s to a Canadian consortium, which brought it to Vancouver with plans to put it on display. It went from there to Seattle and then to San Diego, towed here on a 7-knot journey that took eight days.

Museum officials never expected it to be a permanent part of the collection. In 2010, plans were announced to add it to San Diego’s Wreck Alley, a group of vessels sunk off Mission Beach to form artificial reefs and attract recreational divers. But the popularity of B-39 among museum-goers scuttled the scuttling.

Now it awaits a tow date to Ensenada.

“We have determined not to shift scarce resources away from the historic vessels in the (museum’s) fleet that we intend to keep in perpetuity, in order to extend the life of the Foxtrot,” the museum says on its website.

Coast Guard officials did not respond to requests from the Union-Tribune for information about the removal permit.

Other Soviet submarines were given post-military reprieves as tourist attractions and have met a similar fate. The B-143, which spent 20 years at a maritime museum and theme park in Brussels, was scrapped in 2019.

In Long Beach, city officials are trying to dispose of the B-427, which was a dockside attraction next to the Queen Mary for almost two decades, drawing about 8,000 visitors a month. It closed to the public in 2015 after a hull ruptured and a ballast tank was flooded, causing the sub to list to the port side. Before long, raccoons moved in.

City officials say the vessel is now an environmental hazard, taking on water and threatening to roll over and damage the Queen Mary.

They’d like the owner to remove the submarine, according to recent media accounts, but years of lawsuits and bankruptcy proceedings have left them with a dilemma: It’s unclear who the owner is.