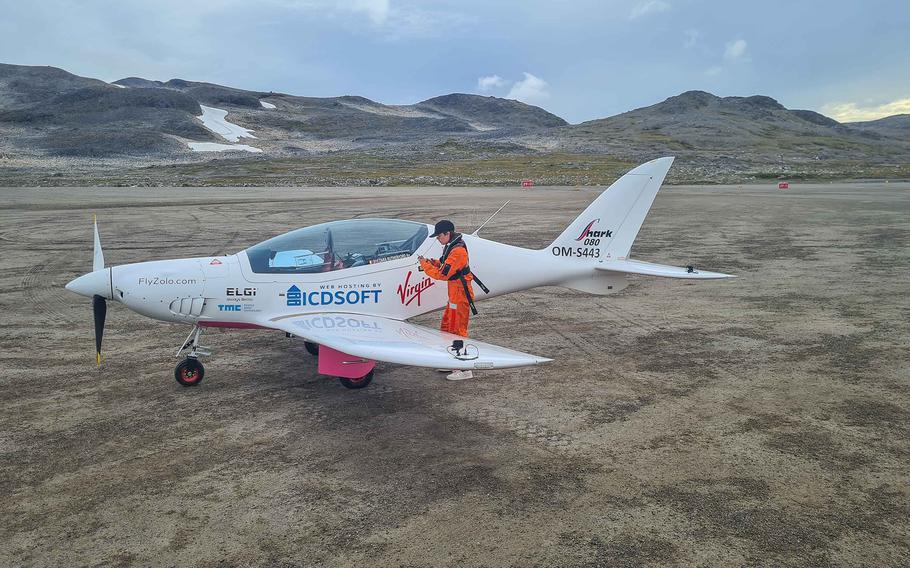 Zara Rutherford, who turned 19 in July and is from Belgium, is trying to become the youngest woman to fly solo around the world. (Beatrice De Smet/Facebook)

ANCHORAGE, Alaska (Tribune News Service) — Zara Rutherford landed in Anchorage on Wednesday during a brief stop on her quest to be the youngest woman to fly solo around the world.

A crowd gathered and welcomed Rutherford as she taxied her Shark ultralight aircraft to the University of Alaska Anchorage hangar at the Merrill Field Airport. Stuffed animals — including a moose from Juneau wearing aviator goggles — sat copilot.

“Right now, I’m just focusing on the flying,” she said. “It’s one leg at a time. I never look at the bigger picture just because it kinda freaks me out.”

Rutherford, who turned 19 in July and is from Belgium, was grounded in Juneau last week due to weather and mechanical issues with her plane.

She departed Juneau on Wednesday and landed in Yakutat for a quick break after turbulence triggered her plane’s G-force warnings. After a break and a chocolate cookie she was back in the air.

“That second half was amazing,” Rutherford said. “It was really beautiful. It was also kind of my first (solo) flying ... in terrain, dodging mountains.”

Rutherford has roughly 270 total flight hours since obtaining her private pilot’s license in 2020. About 120 of those hours have been racked up on this journey as she makes her way northwest to Nome, where she landed on Friday. Nome marks the trip’s halfway point. From there, she will head across the Bering Sea to Asia. She plans to complete her circumnavigation in mid-November.

“As long as I’m home before Christmas, I’m happy,” she said.

Rutherford credits her interest in flying to her family of aviators, as both her parents are pilots. She recalled spending her childhood growing up around airplanes and flying with her dad to places like southern Africa and across Europe.

“I always just thought it would be amazing to fly around the world but I never thought it’d be a real thing,” she said. “So I’ve got a year free, with nothing planned, so I might as well do something a bit crazy with it ...”

Rutherford hopes her journey will help highlight the gender gap in aviation and science, technology, engineering and mathematics-related careers.

“Only five percent of commercial pilots are women. I think that’s appalling,” she said. “I’m hoping to get more girls into aviation and I think it’s working, so I’m really excited.”

As the event concluded, people lingered near Rutherford and waited to take photos and check out her plane.

Sonny Venes, who is from Bethel and Nyac, was in Anchorage for medical appointments and decided to attend the event. Venes said he worked in aviation for most of his adult life and was an air traffic controller for the U.S. Navy.

“I can’t believe she sits in that little airplane and so far from home,” he said.

Odin Nelson, 9, watched her land with his grandfather Rod Hanson. The pair came to Anchorage from Mat-Su for the event. Hanson is a pilot and has been flying with his grandson since Nelson was about 5 years old.

Nelson, standing at about wing height, walked up to the plane for a photo. He flexed his muscles as Rutherford joined behind in her orange flight suit.

Hira Rhaa stood back in the crowd and quietly waited for her turn. Rhaa, 31, completed her final check ride two weeks ago for her private pilot license.

“I am so excited for her,” she said. “It means that women can do anything. It’s just great that so many people came out and support her.”

“If I can get a couple girls to go into aviation, then I’ve done my job, really,” Rutherford said.

The current female record-holder for circumnavigation in a single-engine aircraft is Shaesta Waiz, who was 30 at the time of her 2017 solo trip.