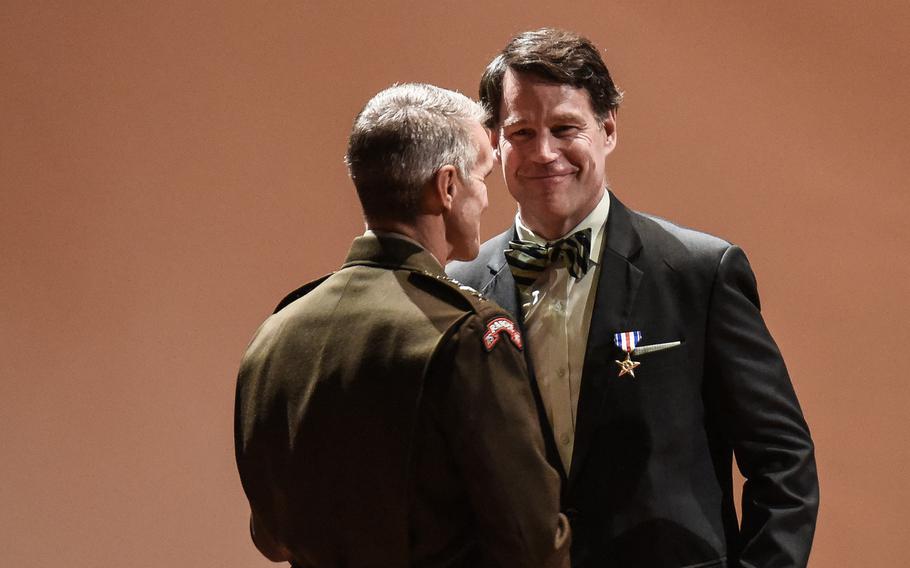 Jeff Struecker is presented the Silver Star on Friday, Oct. 1, 2021 at Fort Benning, Ga., by Army Gen. Richard Clarke, head of U.S. Special Operations Command for actions in the infamous October 1993 Battle of Mogadishu. Struecker was a staff sergeant and squad leader with the Army’s 3rd Battalion, 75th Ranger Regiment during the battle made famous by the book and movie “Black Hawk Down.” (Corey Dickstein/Stars and Stripes)

FORT BENNING, Ga. — During 23 years in the Army — much of it in the elite ranks of the 75th Ranger Regiment — Jeff Struecker saw combat in Panama, Iraq and Afghanistan, but nothing compared to the infamous October 1993 gunfight through the streets of Mogadishu.

“I’d been to combat a couple of times before Somalia and a lot of times after, but I’ve never seen heroism, I’ve never seen fighting, like we saw among these guys on the streets of Mogadishu, Somalia,” said Struecker, one of 18 veterans who fought in the battle officially known as Operation Gothic Serpent and awarded the Silver Star for valor Friday. “Nothing came close to Somalia. I mean not even close.”

The Silver Stars presented in a ceremony at Fort Benning, Ga., for those who were serving 28 years ago in the 3rd Battalion, 75th Ranger Regiment were upgrades of Bronze Star medals with combat “V” for valor that the Rangers were presented months after returning from Somalia. The Battle of Mogadishu, in which 18 American soldiers were killed, was later made famous by the best-selling book “Black Hawk Down” and the Hollywood movie of the same name.

For Struecker, the honor was “bittersweet” and unexpected. He said others who fought in that battle were more deserving of the Silver Star, the nation’s third highest honor for battlefield heroics. He said he was particularly proud to see some of the other troops from that fight honored.

“It’s truly an honor,” said Sean Watson, who was a sergeant first class at the time and would go on to retire as a command sergeant major in 2015. “I believe that being an awardee is actually a representation of everybody in the position I was in. They earned it — they’re the ones who really earned this.”

The Army announced in July, 60 veterans of the battle — mostly Army special operators, many of whom have not been named publicly — would receive award upgrades for their actions in the fight. That includes 58 Silver Stars and two Distinguished Flying Crosses. Award ceremonies are planned for other units in the future, Army officials said Friday. 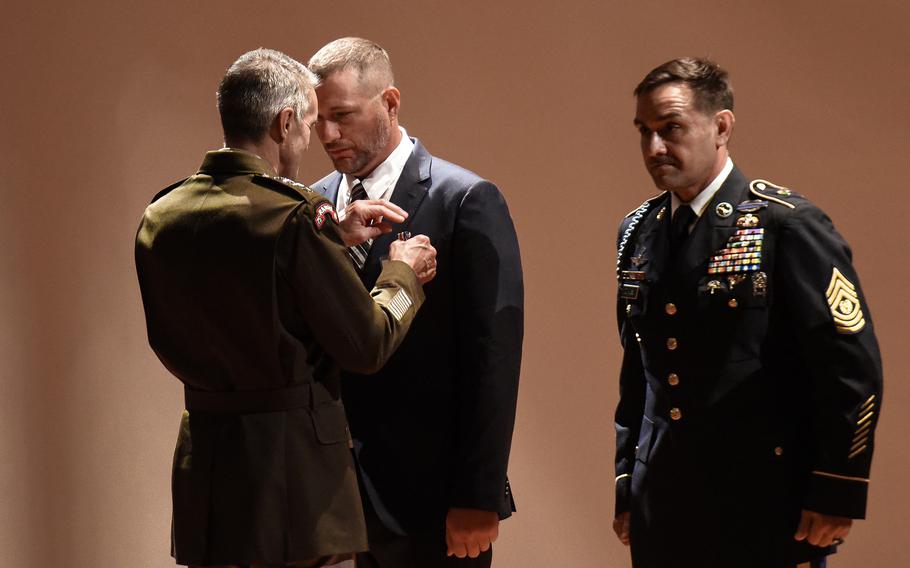 John M. Collett is presented the Silver Star on Friday, Oct. 1, 2021 at Fort Benning, Ga., by Army Gen. Richard Clarke, head of U.S. Special Operations Command for actions in the infamous October 1993 Battle of Mogadishu. Collett, then a specialist, was a squad automatic weapon gunner with the Army’s 3rd Battalion, 75th Ranger Regiment during the battle made famous by the book and movie “Black Hawk Down.” (Corey Dickstein/Stars and Stripes)

The battle broke out as American special operators — primarily Rangers, and other elite soldiers from the 160th Special Operations Aviation Regiment and 1st Special Forces Operational Detachment-Delta, or Delta Force — set out to capture two top lieutenants of warlord Mohamed Farrah Aidid, who was responsible for attacks on U.N. peacekeeping troops working to end civil war in Somalia.

The assault force was inserted into the city by helicopter, and another element was to follow that group into the city in Humvees, according to the Army, which said many elements of the battle remain classified despite the enormous attention it has received publicly.

Struecker, then a staff sergeant with the Rangers’ 3rd Battalion, was leading a squad assigned as the ground reaction force to support the helicopter-borne troops entering Aidid’s stronghold in the Bakara Market. The helicopter assault force went in first to search for the warlord’s henchmen and the ground force came into the market later, according to the Army’s description of the battle.

It was the Rangers’ seventh mission in Somalia, but this one, Struecker said, was in broad daylight in a well-defended part of Mogadishu with an unknown number of enemy fighters.

That U.S. force of less than 200 operators would find itself in a fight with some 10,000 to 12,000 well-armed Somali fighters. After the assault force nabbed Aidid’s aides, militants attacked the troops and shot down two MH-60 Black Hawk helicopters with rocket-propelled grenades — something the Army had never seen before, officials said.

It set off a frantic mission to secure the locations of the downed Black Hawks and recover wounded and fallen Americans. U.S. special operators would spend 18 hours running and fighting their way through the city’s streets, according to the Army.

Struecker, 52, led his ground unit through the city three times as the battle raged. Their Humvees were “like bullet magnets,” he recalled. His Silver Star citation credits him with repeatedly sacrificing “his own personal safety” to help other soldiers.

“We go back and forth, in and out of the city all night long,” Struecker said. “The Humvees are the biggest, easiest target to hit out there, and so we’re losing guys right around me.”

Dominick Pilla, a sergeant and machine gunner, was just behind Struecker when he was shot and killed — the first American death in the battle. His Silver Star citation credits Pilla with “suppressing numerous enemy positions while under fire himself.” His heroics, it added, saved “the lives of all the other Rangers” with him at the time. He was 21.

Meanwhile, Watson — a platoon sergeant at the time who had entered the fight by helicopter — moved his force toward one of the downed Black Hawks, fighting their way through the city. His Silver Star citation credited him with securing the crash site from enemy forces “until reinforcements came the next morning.”

It was brutal work, Watson said. But he was awed by the actions of the Rangers and others around him.

“It was something to behold from my position to watch what was going on — the way they performed,” he said. “It was beyond compare.” 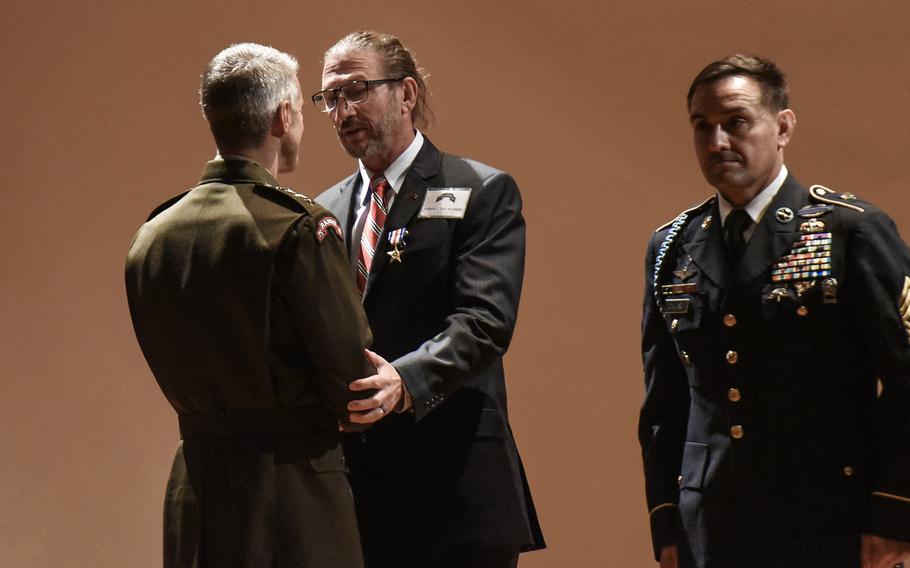 Sean T. Watson is presented the Silver Star on Friday, Oct. 1, 2021 at Fort Benning, Ga., by Army Gen. Richard Clarke, head of U.S. Special Operations Command for actions in the infamous October 1993 Battle of Mogadishu. Watson, then a sergeant first class, was a platoon sergeant with the Army’s 3rd Battalion, 75th Ranger Regiment during the battle made famous by the book and movie “Black Hawk Down.” His platoon was inserted into the operation by helicopter and later helped secure the location of the crashed MH-60 Black Hawks, which was struck by enemy rocket-propelled grenade fire. (Corey Dickstein/Stars and Stripes)

Three of the four pilots in the downed Black Hawks would die, and the fourth was captured and later released.

Two Delta Force operators — Master Sgt. Gary Gordon and Sgt. 1st Class Randy Shughart — were posthumously awarded Medals of Honor for their actions to secure the site of one of the Black Hawk crashes to recover survivors. Both of those operators were among the U.S. dead in the fight.

In all, 73 U.S. troops were injured in the battle, according to the Army. The botched mission left a long-lasting mark on American foreign policy after television news broadcast images of an U.S. soldier’s body dragged through Mogadishu’s streets as locals cheered.

The defense secretary at the time, Les Aspin, would resign his post in wake of the battle. Ultimately, former President Bill Clinton elected to end the mission to capture Aidid and he removed all U.S. forces from Somalia by March 1994. U.S. troops would not return to the country until 2007.

The book “Black Hawk Down” would be published in 1999, receiving high praise for its detailed retelling of the battle. In 2002, the movie brought the Battle of Mogadishu onto American screens in the months after the first U.S. troops invaded Afghanistan in response to the 9/11 terrorist attacks.

Struecker, who would commission as an officer after 10 years of enlisted service and serve as a chaplain until retiring as a major in 2011, described the book as an “extraordinarily accurate" accounting of the battle. The movie, he said, followed the book closely, though it took some liberties — blending several events into a single incident or multiple characters into a single individual.

“What you see in the movie 'Black Hawk Down' basically happened,” he said. “It's about as accurate as you're going to get. It's not a documentary, but for a major motion picture, I don't know how you can make it much more accurate.

“The difference, for those of us who were there, right, is the violence,” Struecker said. "It isn't even close to the real thing — the level of violence, of course.”

Watson said he rarely talks about his time in Mogadishu, and he does not think about it very often, either. Later, he deployed to Afghanistan three times and saw combat there. But, like Struecker, he said the fighting there was incomparable to Mogadishu.

“I felt very fortunate that I never was in the extreme position that I was in Somalia ever again,” he said. “Was I prepared for it? Yes, I was. I was very prepared. And it was a lot. And, thankfully, [fighting] never, ever occurred at that level again for me.” 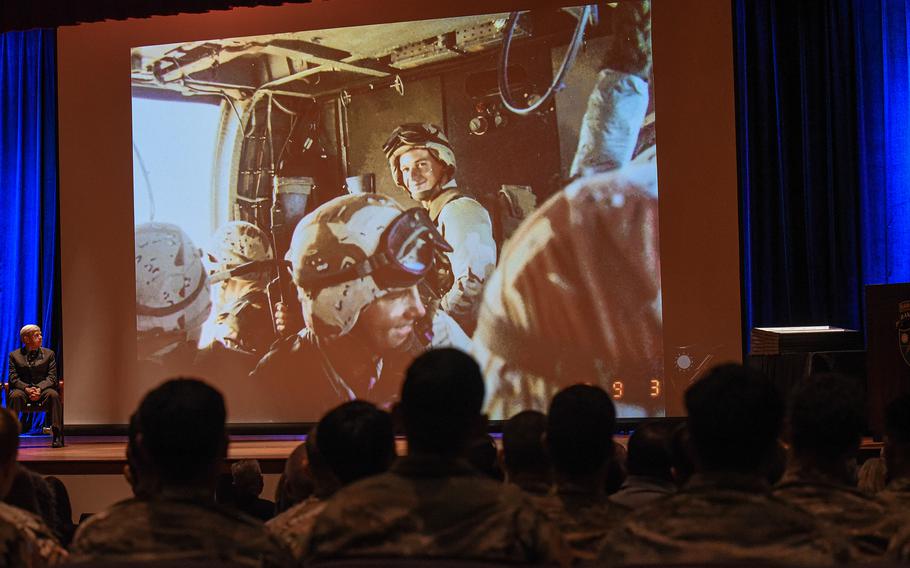 Current U.S. Army Rangers look at photos of 3rd Battalion, 75th Ranger Regiment Rangers in action in Somalia in 1993 before 18 former members of the unit were awarded Silver Stars for their actions in the infamous Battle of Mogadishu that year. (Corey Dickstein/Stars and Stripes)

The Army on Friday presented 18 Silver Star medals to former members of the Fort Benning, Ga.-based 3rd Battalion, 75th Ranger Regiment for their actions in Mogadishu, Somalia, on Oct. 3 and Oct. 4, 1993. The awards were upgrades of the Bronze Star medals with combat “V” device for valor that the Rangers received shortly after the battle — among the most infamous fights in recent decades in which U.S. troops fought.

Those receiving the Silver Star on Friday were (ranks at the time of the battle):