As another shutdown looms, a bipartisan bill would force legislators stay in D.C. to pass a budget 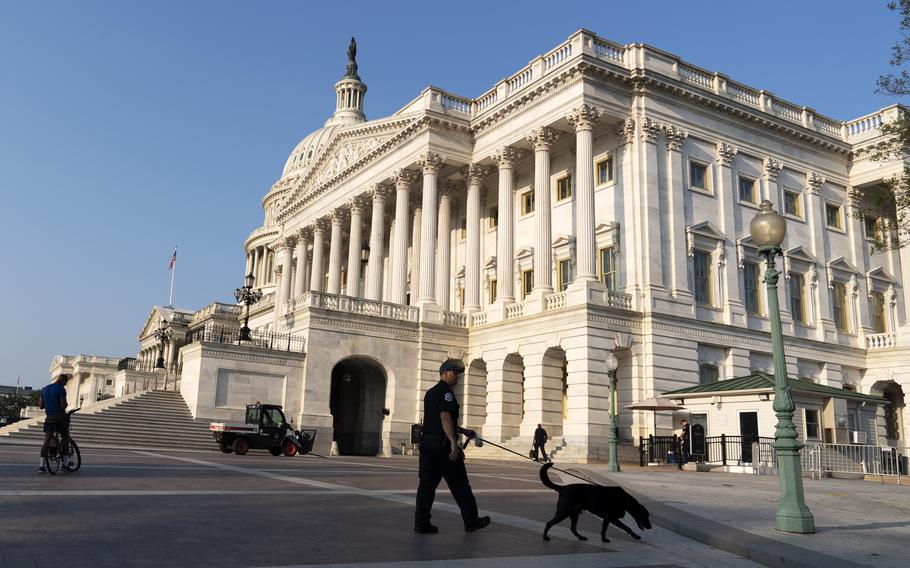 The U.S. Capitol is seen in Washington, early Tuesday, July 27, 2021, as U.S. Capitol Police watch the perimeter. Democrats are launching their investigation into the Jan. 6 Capitol insurrection. They’re beginning with a focus on the law enforcement officers who were attacked and beaten as the rioters broke into the building. It’s an effort to put a human face on the violence of the day. The police officers who are testifying Tuesday endured some of the worst of the brutality. The panel’s first hearing comes as partisan tensions have only worsened since the insurrection. Many Republicans have played down or outright denied the violence that occurred and denounced the Democratic-led investigation as politically motivated. (Jose Luis Magana/AP)

WASHINGTON - Unlike most other organizations, the federal government threatens itself with serial, avoidable dysfunction.

This self-intimidation - call it the potential government shutdown syndrome - often occurs during the closing days of the fiscal year, which ends Sept. 30. If Congress doesn’t approve funding by Thursday this year, major sections of the government will close.

It doesn’t have to be this way.

Congress should be able to approve all 12 regular appropriations bills needed to fund the government in time to take effect on Oct. 1 every year. But that’s true only in theory, given the way Congress gets things done - or doesn’t. The last time that theory played out and the regular appropriations process flowed like it should was in 1997, according to the Partnership for Public Service, a nonprofit think tank that studies federal agencies.

Even the threat of a shutdown, such as the one we’re facing this week, has significant consequences.

“It creates chaos in every agency. Every agency has to stop what they’re doing in their leadership office and plan” to close down major operations, said Sen. James Lankford, R-Okla., in an interview. “It distracts every agency and the individuals within the agencies as they’re trying to get their work done.”

Since 2019, they have repeatedly pushed bills that would automatically impose temporary funding measures, known as continuing resolutions, to counter the inability of legislators to pass budgets, their most basic responsibility.

The legislation would make life difficult for members of Congress by essentially forcing them to stay in Washington until they fund the government. While the temporary funding is in place and until regular funding is approved, they would be forced to show up to the Capitol, with attendance taken daily, including weekends. No taxpayer funds could be used for travel, except for one flight to return to Capitol Hill for work. That would apply to members of the House and Senate, and their staffs, as well as White House Office of Management and Budget (OMB) officials.

“If you get to the end of the budget year and the appropriations work is not done, we have mandatory quorum calls in this body at noon every single day, seven days a week until we get all the appropriation work done,” Lankford proposed in a 2020 speech to colleagues. “None of us can travel. We all stay here in D.C. We want to be home. We want to be able to meet with our constituents. We want to take care of the practical needs that are there. The way to do that is get our work done here.”

Their bill won’t become law in time to prevent a potential shutdown this year. Even if the Senate adopted it this week, it hasn’t been introduced in the House. So here we are again, teetering on the brink of another partial collapse.

Legislators and White House officials expect Congress to keep the government open with temporary funding, but OMB has told federal agencies to prepare to halt operations just in case.

“Consistent with longstanding practice across multiple Administrations, OMB is preparing for any contingency, and determinations about specific programs are being actively reviewed by agencies,” OMB spokesperson Abdullah Hasan said in an email. “More importantly, there is enough time for Congress to prevent a lapse in appropriations, and we are confident they will do so.

Congress probably will prevent that lapse by approving temporary funding.

That’s only better than nothing.

Max Stier, the president and CEO of Partnership for Public Service, said continuing resolutions are like buying one slice of bread at a time instead of the whole loaf. “It’s going to cost you a ton more,” he said, “and you’re not going to be able to actually plan ahead.”

During the four decades since the Carter administration, “there have been 21 shutdowns of a day or longer . . .” according to Stier’s group. The longest, which started in December 2018 and went into January 2019, was 35 days. It “dramatically disrupted numerous government functions and created long-term adverse consequences for federal agencies and its workforce, the private sector, the economy and more,” the PPS reported. There have been many more times when agencies had to disrupt work to plan for shutdowns that were narrowly averted.

That’s where we are now - hoping to avoid a shutdown while planning for one.

“The reality is, we shouldn’t even be having the threat of government shutdowns,” Hassan said by email. “Shutdowns aren’t just avoidable, they cause real harm - impacting critical services for veterans, jeopardizing the livelihood of federal employees, and risking our national security.”