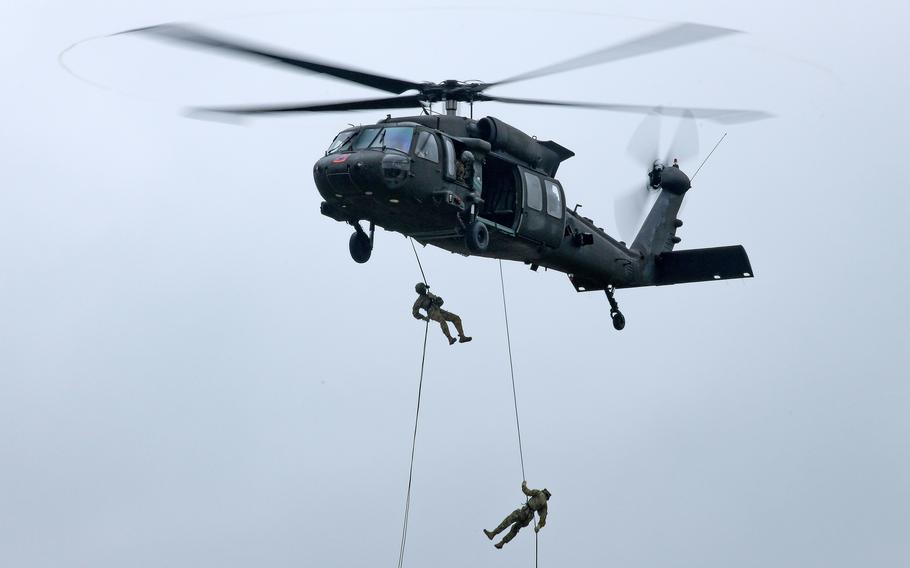 Soldiers from units across Europe take part in an air assault course at Grafenwoehr Training Area, Germany, on Sept. 16, 2021. In a new poll of Americans, nearly half of of those surveyed think the U.S. needs to scale down its military activities abroad. (Markus Rauchenberger/U.S. Army)

Most Americans would like the U.S. to increase diplomatic engagement with other countries on issues such as climate change and migration, and many think Washington should scale down its military activities abroad, a new public poll showed.

Part of those military reductions should include cutting the number of U.S. troops stationed overseas, said those polled by the Eurasia Group Foundation, a New York-based political risk consultancy.

Over 42% of respondents believed that the number of U.S. service members stationed in places like Germany, Japan and the Persian Gulf region — currently about 200,000 — should be cut, and that Washington should reduce its commitments to defend those nations.

Meanwhile, about 60% of those surveyed wanted the U.S. to increase its participation in international organizations and in negotiations on topics of global importance. Only about 20% said less engagement was necessary. 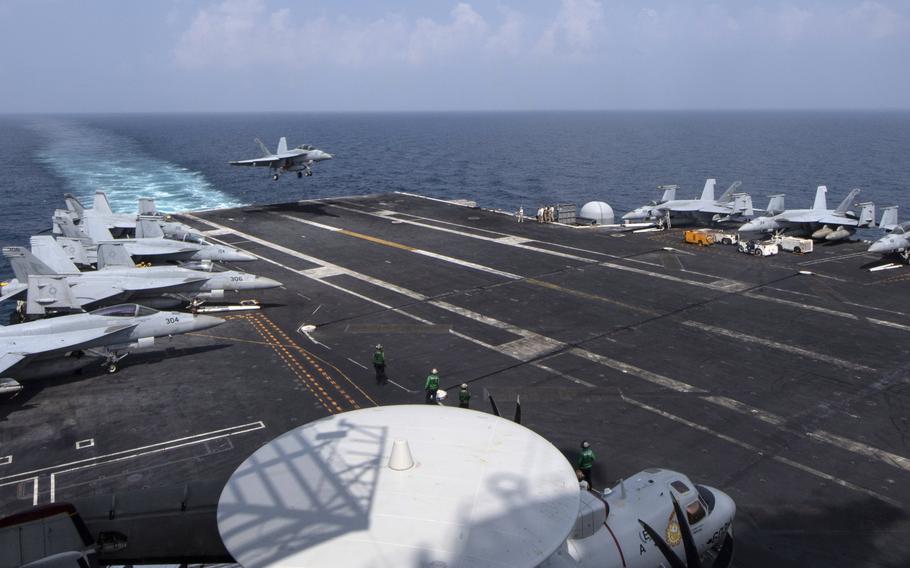 An F/A-18F Super Hornet lands on the aircraft carrier USS Nimitz in the Persian Gulf in October 2020. Nearly half of Americans polled recently by the Eurasia Group Foundation think U.S. military activities abroad should be reduced. (Elliot Schaudt/U.S. Navy)

Nearly 2,170 people were included in the poll. The report released Tuesday did not include a margin of error .

“As the world grapples with problems which are not easily solved with military force — such as natural disasters related to climate change and the ongoing coronavirus pandemic — this year’s survey sought to gain a more granular understanding of the kinds of international engagement Americans support,” said the report.

Partisan differences over how the U.S. should engage in the world were more pronounced than they were during last year’s annual survey.

Half of the respondents who identified as Democrats would like to see U.S. engagement based more on international cooperation than military intervention, while over 80% of Republican respondents embraced approaches that would maintain a strong global military presence while reducing the country’s involvement in international institutions. 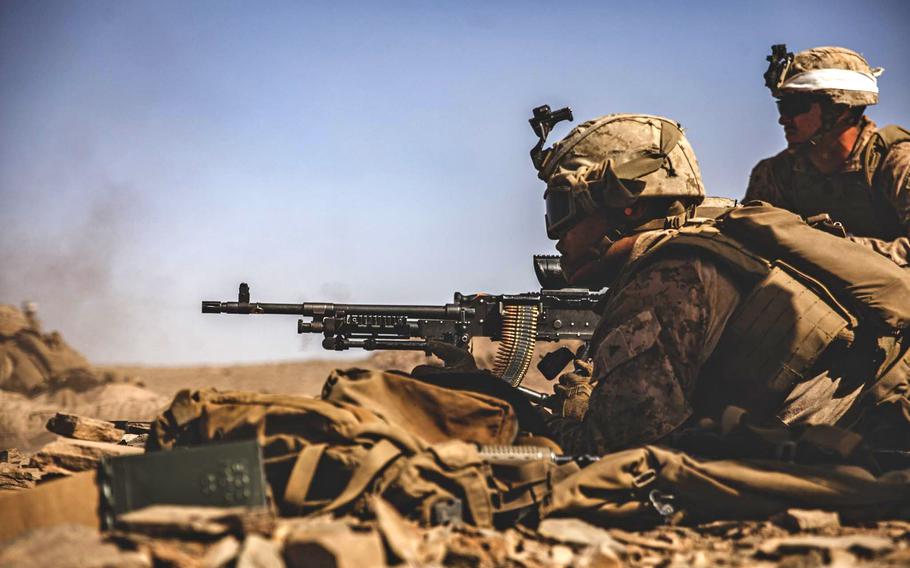 U.S. Marines conduct live-fire training during a combat rehearsal in Tabuk, Saudi Arabia, on June 19, 2021. The Eurasia Group Foundation polled Americans in the midst of the U.S. withdrawal from Afghanistan, and nearly half of those surveyed said the country should dial down its military activities abroad. (Isaiah Campbell/U.S. Marine Corps)

“Some of this might be attributed to the new Democratic presidency and partisan opposition to its diplomatic efforts,” the report said.

Despite their political affiliations, about half of all Americans have expressed a greater desire to protect democracy at home than promote it abroad, the results showed.

“After fighting a costly and interminable War on Terror it’s possible that many Americans are newly attentive to turbulence at home, from rising distrust in the electoral system to a deeply rooted history of racial injustice,” the report said. 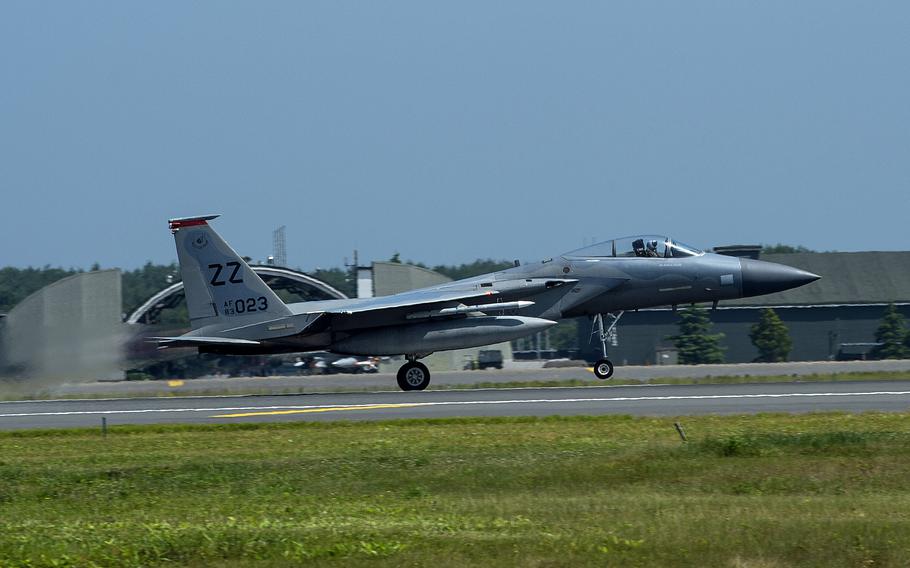 An F-15C Eagle takes off from Misawa Air Base, Japan, in 2017. Nearly half of the respondents in a recent poll think the U.S. needs to scale down its military activities abroad. The survey was conducted by the Eurasia Group Foundation. (Deana Heitzman/U.S. Air Force)

This year’s survey was conducted between Aug. 27 and Sept. 1, during the chaotic withdrawal of U.S. forces from Afghanistan, which ended the U.S.’s longest war after nearly two decades.

When given several choices on what they thought was the most important lesson learned from the war in Afghanistan, the most popular picks, at 33%, were that the U.S. should refrain from nation-building and solving the political problems of other countries; and, with 29% in agreement, that the U.S. military is best deployed when vital national interests are threatened.

Overall, nearly 70% of Americans believe drones are less costly than sending troops into combat, and are an effective tool in dealing with terrorists in places like Afghanistan, the poll said.

Two-thirds of those polled also would prefer to see the defense budget decreased, with most citing a desire to redirect resources domestically, the findings showed.