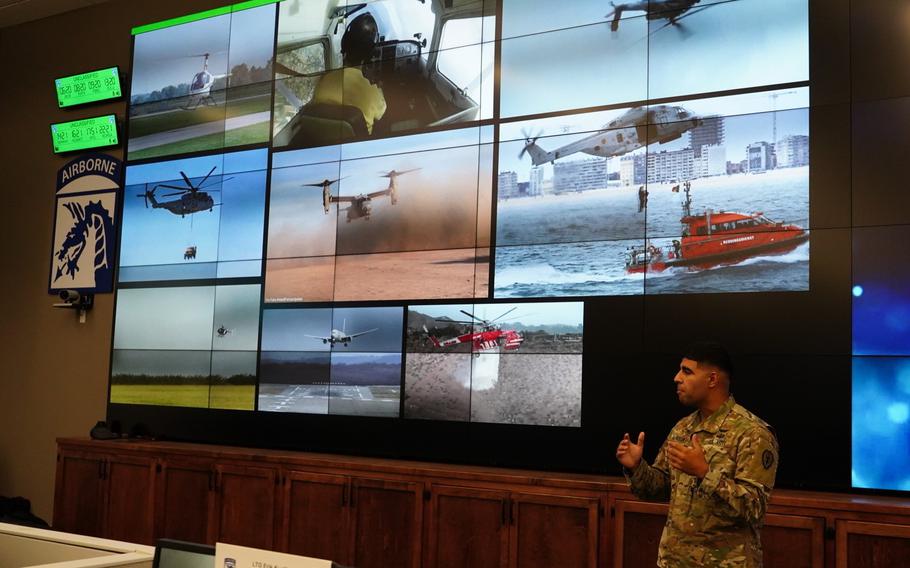 Army 1st Lt. Mahdi Al-Husseini, who is assigned to the 25th Combat Aviation Brigade, pitches his presentation on AI pilot performance feedback. Al-Husseini is one of seven soldiers who is taking part in Dragon’s Lair 5. The program was established in October 2020 to help increase innovation across the XVIII Airborne Corps. (Marygian Barnes/U.S. Army)

A medevac pilot stationed at Schofield Barracks, Hawaii, created an “optical black box” to improve Army pilot training and won the latest round of a Fort Bragg, N.C.-based program to encourage soldier-driven innovation within the service.

First Lt. Mahdi Al-Husseini, who flies HH-60 Black Hawk helicopters with the 25th Infantry Division, used artificial intelligence to invent Aura, a computer program that provides pilots feedback on their flights to evaluate performance and develop customized training plans. He pitched his prototype Monday at Fort Bragg for the fifth iteration of Dragon’s Lair, an innovation program designed based on the TV show “Shark Tank.”

“This is incredibly well-deserved recognition,” said Maj. Gen. Joe Ryan, commander of the 25th Infantry Division. “The system he designed and built, with its implications to improve safety for pilots and soldiers, is revolutionary.”

Seven soldiers presented ideas to an 11-member panel of leaders from the 18th Airborne Corps, the highest headquarters at the base. The panel also included past winners and experts from the civilian technology industry. Al-Husseini, 25, was the first soldier outside of the 18th Airborne Corps to participate, bringing the entire Army into a corps program that began in October and has led to at least four other innovations, including one to modernize training range scheduling and another to address how the Army responds to sexual assault and harassment.

“I do love this notion of the soldier inventor,” Al-Husseini said. “I think there's something really valuable and powerful about having soldiers being able to kind of improve their own mission sets that they know better than anybody else and providing them with the tools and the resources to do that.”

Instead of trying to integrate a system into the aircraft itself, Al-Husseini built a computer and camera system that can be added to any aircraft with glass screens. It scans the instrumentation data off the screens of the cockpit, analyzes it and determines what maneuvers the pilot performed. The data is then compared to the standards outlined in flight manuals to inform the pilot if he or she met the standards.

Aura can tell pilots how far off they are on windspeed, altitude and heading, among other metrics. It can also show them by using the data to create a visual of the maneuver available to view through a tablet application, Al-Husseini said.

“The benefit of that is now you can actually see exactly what you're doing, and you can review and store that data for later use,” he said. “If you're practicing or you're training, all sudden you now have very clear, objective, dynamic in-flight updates that allow you to see how well you're doing and then adjust your performance, again in flight.”

This is especially valuable when flying without an instructor pilot, Al-Husseini said. He has taken the system with him while flying a Cessna 172 fixed-wing airplane to see how it works. He learned where he is struggling to perform steep turns, and he said it has helped him to begin improving.

“I've never particularly been good at a steep turn,” he said, describing the maneuver that resembles a figure-eight to someone on the ground. “There's very little time in the maneuver for reflection.”

From Aura, Al-Husseini said he could see where he lost altitude and pinpoint a pattern in his flying that he needed to correct.

The 18th Airborne Corps has begun to implement the pilot’s program throughout the unit, as part of winning the Dragon’s Lair competition, said Col. Joe Buccino, the innovation officer for the corps. From there, they’ll submit the program to the Army for broader implementation.

“Mahdi’s program has the potential to revolutionize the way our Army manages aviation practices and pilot and crew performance,” he said. “This was among the most well-developed, visionary concepts we’ve seen come into Dragon’s Lair thus far.”

The innovations presented are becoming more competitive, Buccino said, with Al-Husseini’s program narrowly beating out the second-place winner, Lt. Col. Jason Harlan, assigned to the 3rd Infantry Division. He created a self-recovery system for M1 Abrams tanks, which he developed in his garage using his own resources.

Other ideas included a virtual reality program to train mechanics, an update to the weapons-issue system, and a “go-bag” for sexual assault response coordinators. Some elements of each of the seven ideas presented Monday will be implemented in the corps, Buccino said.

“Soldiers identify inefficiencies in their daily life, and they come up with ideas to solve for them. The command doesn't have all the ideas or doesn't even really see all the problems. So Dragon’s Lair mines from the entire Army for solutions,” he said. “It's about embracing ideas, uplifting them and then empowering the soldier to implement the idea.”

Al-Husseini graduated from the Georgia Institute of Technology with an undergraduate degree in biomedical engineering and public policy. He continued into a master’s degree in computer science with a focus on artificial intelligence. He’s now studying aeronautics and astronautics online with Stanford University and built the Aura program alongside a classmate, Joshua Barnett. Most of the building took place in his home office in Hawaii, which he said is more like a workshop.

Though Al-Husseini’s always been a builder and interested in engineering, he was drawn to the mission of a medevac pilot.

“I'd always hear the stories and read about the work that they did, especially back in the Vietnam days. Those pilots were doing those incredibly daring rescues, putting their lives on the line to evacuate multiple wounded soldiers from a point of entry. If I could feed into that legacy or support that mission, that effort just a little bit, I couldn't think of anything more meaningful to do,” he said. “I realized that I can still put my engineering skill set to good use, even if I'm not necessarily in the engineering branch. I've certainly found that to be true.”

As Aura moves through implementation, Al-Husseini said he’s not done looking for new ideas. He said he’s working with three soldiers in Hawaii on different projects related to their jobs on a medevac flight crew.

“Soldiers very much do have the ability and the opportunity to kind of develop the things that affect their individual mission sets,” he said. “You don't have to have a fancy master's degree or be an engineer to come up with something that makes difference in what you do every day.”