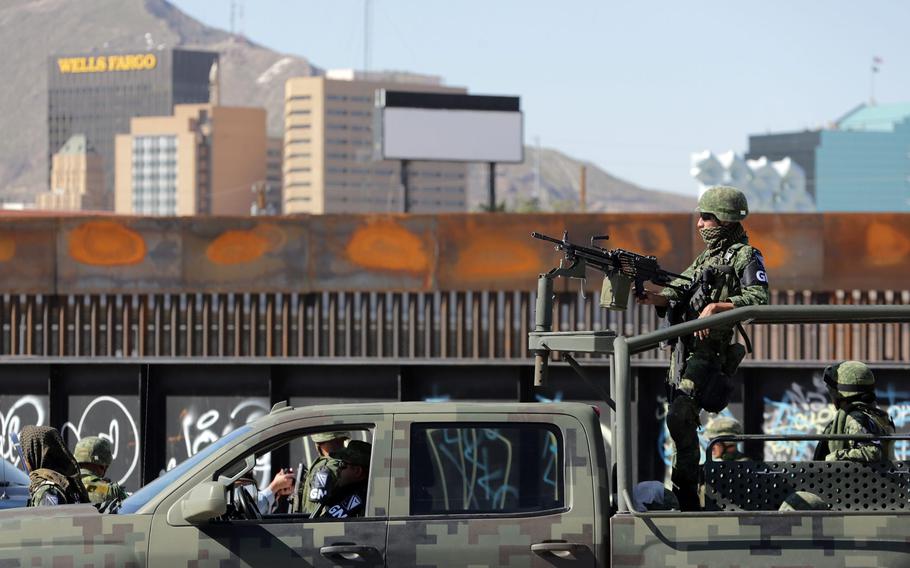 EL PASO, Texas (Tribune News Service) A group of 14 Mexican soldiers was detained Saturday after inadvertently crossing the border at the Bridge of the Americas in El Paso, a U.S. Customs and Border Protection spokesman said.

The soldiers were returned to Mexico after being detained by CBP for about five hours. One of the soldiers was issued a civil fine for being in possession of a personal-use amount of marijuana, CBP said.

The bridge is also known as Puente Internacional Córdova de las Américas and as the Puente Libre, or free bridge, because there is no bridge toll charge.

CBP officers approached the military trucks and temporarily detained the soldiers and secured their weapons and equipment.

Photos shared on social media showed soldiers sitting on the asphalt and a military pickup stopped near the CBP checkpoints at the foot of the bridge on the El Paso side.

The soldiers told CBP that they did not realize they had entered U.S. territory. CBP contacted Mexican military leadership who soon arrived at the international bridge.

Shortly before 5 a.m., all the soldiers, equipment and vehicles were returned to Mexico, CBP said.

Similar border incidents have occurred over the years, often involving Mexican soldiers or federal police from other parts of Mexico who cross the borderline into the U.S. at the middle of the international bridges in El Paso.

The Mexican military has patrols and a security presence in Juárez, including at the border crossings.