GOP to massively step up 2022 poll watching efforts in Michigan, across US 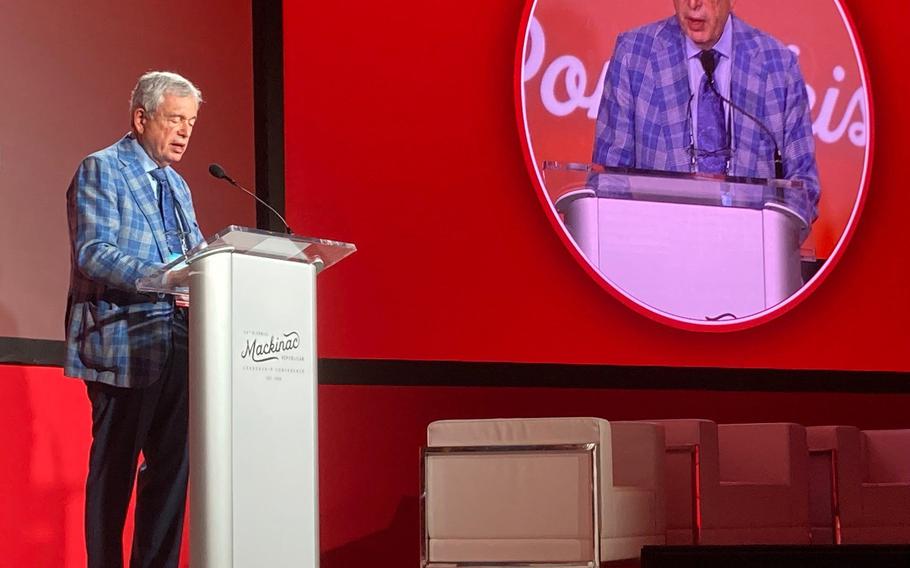 MACKINAC ISLAND, Mich. (Tribune News Service) — The GOP will massively increase its poll watching and election litigation efforts in 2022 and beyond after so far failing to overturn the results of the 2020 presidential election through a series of lawsuits and audits, a top Republican National Committee official said Friday.

Josh Findlay, election integrity director for the RNC, said one problem with GOP operations in 2020 was that attorneys for former President Donald Trump and other conservative groups went to court too late.

Going to court on Election Day is "not going to be effective," Findlay told attendees at the Mackinac Republican Leadership Conference, held every other year on the northern Michigan island that can only be reached by ferry or private plane, and where motorized vehicles are generally banned.

Findlay acknowledged another problem — one that nonpartisan judges and Democrats said in response to allegations of voter fraud and irregularities put forward by Republican poll watchers in Detroit. There, large numbers of volunteers were recruited by the GOP, in many cases at the last minute, to go to the TCF Center in Detroit while absentee ballots were being counted after the Nov. 3 vote.

Many were barred from entering or required to leave, in some cases because of social distancing rules, resulting in a chaotic scene in which crowds of people were banging on the windows of the counting room and shouting as election workers tried to complete the count. More significantly, many scenes the poll watchers witnessed and described as evidence of possible fraud were discounted by judges after election experts testified that the witnesses lacked knowledge and training and simply did not understand what they were seeing, interpreting normal election processes, such as the presence of blank ballots needed to duplicate military ballots and damaged absentee ballots, as signs of malfeasance.

Many volunteers around the country did not know "their rights," as well as "what exactly the process was," Findlay said.

Next time, "when we go into Election Day, we'll know exactly what to look for," he said.

The RNC has already appointed election integrity directors in nine states and many more will be appointed soon, he said. Not only will such staff people be put to work earlier, but they will be much better staffed with deputies and regional field directors, instead of working alone, he said.

Meshawn Maddock, co-chair of the Michigan Republican Party, said such changes are already evident in Michigan, where she did not meet the state's election integrity director until about 90 days before the 2020 vote. For 2022, Michigan already has a full-time director, more than 13 months out, and volunteers are already being recruited and trained, she said.

—Prohibiting the private funding of election offices for efforts such as increasing voter participation.

Other panelists cited strict voter ID rules as another priority.

Findlay said the RNC's Election-Day efforts had been severely hindered for nearly 40 years because of a federal consent decree arising from a 1981 Democratic lawsuit alleging Republican voter suppression efforts.

That court order was lifted just before the 2020 vote and the RNC is now massively stepping up its Election-Day efforts to monitor the vote, he said.

Mark Brewer, a former chairman of the Michigan Democratic Party who specializes in election law, said Findlay is correct that many Republican poll watchers in Michigan "had no idea what they were doing." They do need better training, he said.

But under the federal consent order, "what they were hampered from doing was harassing Black voters," Brewer said.

Other panelists were Thor Hearne, a Missouri attorney who filed a lawsuit on behalf of the Trump campaign seeking to halt the counting of absentee ballots in Detroit, and Minnesota attorney Erick Kaardal, who was referred for sanctions by a federal judge for filing a "risible" lawsuit against former Vice President Mike Pence, seeking to block certification of the election results.

There is no presidential election in 2022, but Michigan residents will vote on governor, attorney general, secretary of state and the Michigan Supreme Court, among other posts.

The conference continues Saturday and wraps up Sunday morning.