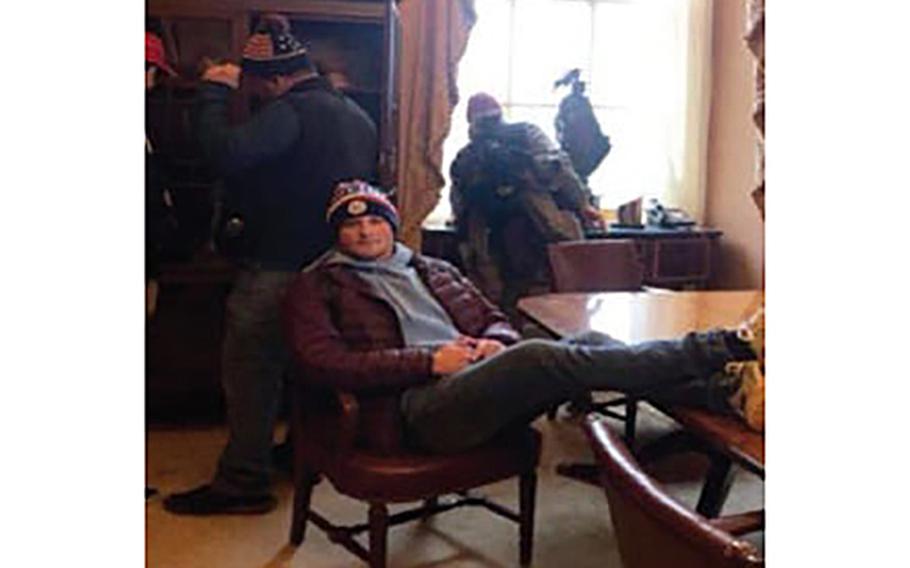 Andrew Ericson is seen inside the U.S. Capitol with his feet propped up on a table during the Jan. 6, 2021, riot. (U.S. Department of Justice)

(Tribune News Service) — During the U.S. Capitol riot Jan. 6, Andrew Craig Ericson plopped his feet up on a table inside House Speaker Nancy Pelosi’s conference room and posed for a photo.

He then took a “selfie” and posted both on Snapchat.

That was his undoing.

The photos led to an investigation and a criminal case against him in federal court in Washington, D.C.

On Thursday, Ericson, 24, pleaded guilty to a misdemeanor count of illegally demonstrating inside the Capitol Building.

He is the second Oklahoman to plead guilty over participating in the riot that caused more than $1.4 million in damage.

He faces up to six months in federal prison and a $5,000 fine at sentencing.

His case attracted more attention nationwide than others early on after the FBI reported a witness watching his livestream on Snapchat saw him take a beer out of a refrigerator.

In a written statement of his offense, Ericson acknowledged taking a beer out of the mini-refrigerator “while inside the Speaker’s Conference Room or other office space.”

He also acknowledged he took a photograph of himself in the conference room “and had someone photograph him seated with his feet on a conference table.”

He further acknowledged he made “cheering sounds” while in the U.S. Capitol and knew he did not have permission to enter there.

His plea was the result of a deal with prosecutors. He agreed to pay $500 in restitution.

In exchange for his plea, prosecutors agreed to ask the judge to dismiss three other counts against him at sentencing.

The sentencing is set for Dec. 10 at the federal courthouse in Washington, D.C.

The hearing Thursday was by videoconference. He must appear in person at his sentencing.

Ericson was caught because someone sent his Snapchat photos to Trent Shores, then the U.S. attorney in Tulsa, the FBI revealed in an affidavit in January. Shores turned them over to the FBI on Jan. 8.

Later, the FBI also obtained some of Ericson’s Snapchat videos, according to the affidavit. An acquaintance who had known Ericson since high school had captured the videos and tipped off the FBI on Jan. 11.

Ericson lives in Muskogee and is the son of a former state representative.

A former Oklahoma City Thunder worker pleaded guilty in July to a misdemeanor for her involvement in the riot.

Danielle Nicole Doyle, 37, went inside the U.S. Capitol through a broken window on Jan. 6. Her sentencing is set for Oct. 1 in federal court in Washington, D.C.

Thousands of people stormed the U.S. Capitol Jan. 6 as Congress met to formally count the Electoral College votes that had Joe Biden winning the presidential election.

There, rioters overwhelmed Capitol police to breach the building.

“Each rioter’s actions — from the most mundane to the most violent — contributed, directly and indirectly, to the violence and destruction of that day,” prosecutors told a judge in a sentencing memo in Doyle’s case.

“Each individual person who entered the Capitol on January 6 did so under the most extreme of circumstances,” prosecutors wrote in the memo. “They would — at a minimum — have crossed through numerous barriers and barricades and heard the throes of a mob. Depending on the timing and location of their approach, they also may have observed extensive fighting with law enforcement and likely would have smelled chemical irritants in the air.

“No rioter was a mere tourist that day.”