Hobby Lobby’s forfeited Gilgamesh tablet is headed back to Iraq 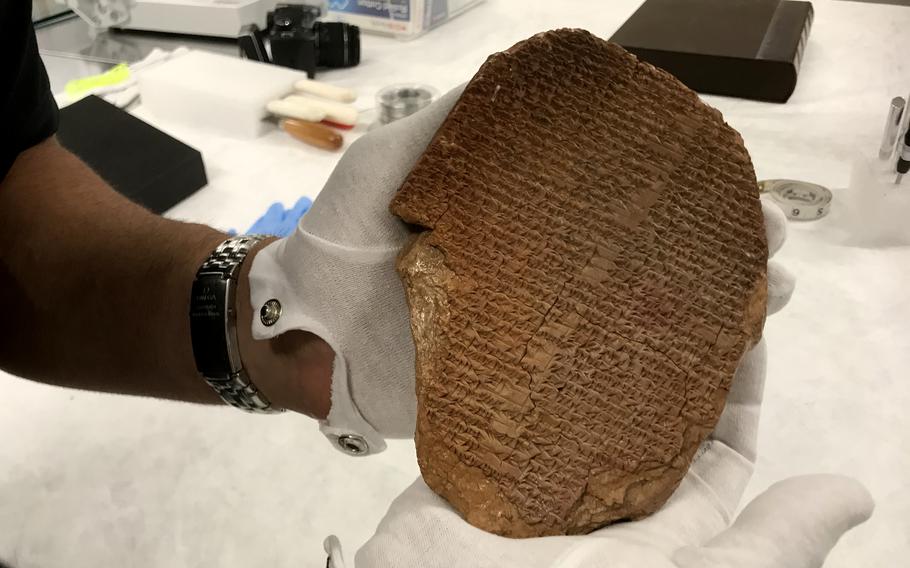 The Gilgamesh tablet will be formally handed over to Iraq in a ceremony Thursday afternoon in Washington, D.C. (Homeland Security Investigations)

WASHINGTON — The 3,500-year-old cuneiform clay tablet from ancient Mesopotamia that was seized by federal authorities in 2019 and officially forfeited by craft store Hobby Lobby in July is being returned to Iraq in a formal ceremony on Thursday afternoon. The handover is both a victory lap for American and Iraqi officials and a symbolic warning to looters that both governments are committed to eradicating the illicit trade of cultural artifacts.

The head of the United Nations Educational, Scientific and Cultural Organization (UNESCO) and senior leaders from the U.S. and Iraqi governments will gather at the Smithsonian's National Museum of the American Indian for the return of the Gilgamesh Dream Tablet, a 6-by-5-inch clay artifact that is part of an epic poem considered to be one of the world's earliest works of literature. The rare piece had once been on display at the Museum of the Bible, the institution built and led by Hobby Lobby chief executive Steve Green that opened a few blocks from the U.S. Capitol in 2017.

The ceremony caps a multiyear effort to return the rare artifact to its homeland and spotlights the ongoing fight against cultural smuggling. While the fragment of the Gilgamesh poem is the star of the event, it represents more than 17,000 items that U.S. officials have returned to Iraq.

UNESCO Director General Audrey Azoulay described the restitution as historic and said it is crucial to Iraq's recovery. After Thursday's event, the tablet is expected to be sent to Iraq and displayed at the National Museum in Baghdad, she said.

"The Gilgamesh tablet is the most symbolic of the 17,000 cultural objects that were seized," Azoulay said in an email. "The 3,500-year-old Assyrian tablet contains a segment from the Sumerian Epic of Gilgamesh poem, which is considered one of the oldest literary works in history. It is a founding story that has inspired the great monotheisms, because this myth has been reinterpreted again and again. It also influenced 'The Iliad' and 'The Odyssey.' It is therefore a jewel of our common humanity and a bulwark against all obscurantism and the identities which pull us apart.

"Having the Gilgamesh tablet returned to Iraq and displayed in the National Museum in Baghdad is also a major step forward in the return of the cultural heritage that was looted from Iraq during decades of conflict," Azoulay continued. "This is crucial to Iraq's reconstruction and recovery."

Highlighting the return of the artifacts could deter the continued looting and trade, said Katharyn Hanson, a cultural heritage preservation scholar at the Smithsonian's Museum Conservation Institute, which has worked with Iraqi cultural heritage practitioners for many years. 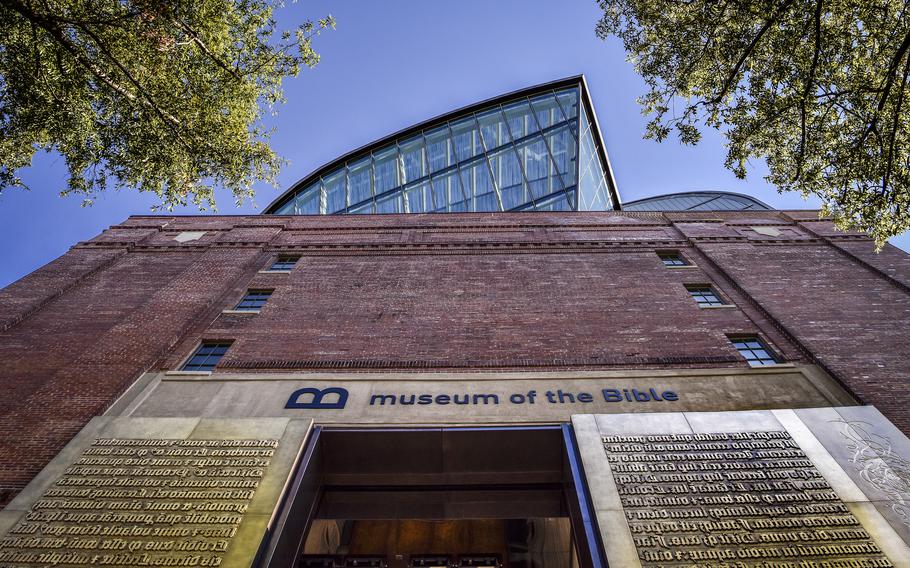 Hobby Lobby bought the Gilgamesh tablet for almost $1.7 million in 2014 to display at the Museum of the Bible in Washington, D.C. (Bill O’Leary/The Washington Post)

"We don't see big repatriations like this as often as we should. I have a lot of hope that it is raising awareness of the issue," Hanson said. "This is going to be a joyous event. The Gilgamesh poem holds a special place in human history, in Iraqi history."

Hobby Lobby bought the tablet for almost $1.7 million in 2014 to display at the museum being built in Washington. The artifact is thought to have been looted from a museum in Iraq in 1991 and smuggled into the United States in 2007, according to UNESCO. It was seized by U.S. officials in 2019, and in July, the U.S. District Court for the Eastern District of New York ordered Hobby Lobby to forfeit it.

The looting and sale of cultural artifacts have increased because of the armed conflict in the region, UNESCO says. Although the extent of the looting is unknown, the organization estimates that the United States represents 44 percent of the global art market.

The recovery of looted artifacts is slow and difficult, said Lazare Eloundou Assomo, UNESCO director for culture and emergencies.

"Some have false documents and it takes years to detect them," Assomo said. "To this, add the fact that every country has its own legal framework, judicial framework and laws regulating the art market."

Thursday's 3 p.m. ceremony spotlights the collaboration between the United States and Iraq, both signatories of a 1970 UNESCO convention that created a legal framework for preventing the trafficking of cultural items and ensuring their repatriation, Assomo said. Iraqi officials in August also cited the efforts of the Bible Museum's leaders in facilitating the return of what they described as a record number of artifacts from the United States.

"In May 2020, when we learned of the fraudulent import and documentation supplied for the item by previous owners, we announced our full support of the U.S. government's efforts to return this item to Iraq," Jeffrey Kloha, the Bible Museum's chief curatorial officer, said in an email.

"We are grateful for the work of the ambassador of Iraq, Fareed Yasseen, and the U.S. State Department for helping us restore this and other items to the Iraqi people," added Kloha, who plans to attend the ceremony. "We look forward to future opportunities to collaborate with our friends in Iraq to study and preserve its rich cultural heritage."

The ceremony also highlights the importance of cultural diplomacy in the fight against the illicit trade of cultural property, Azoulay said, adding that she hopes it serves as a model.

"This restitution is unprecedented, both in terms of the number of items and their value. We expect that this will send a clear message that the time when looted or illegally exported objects could be easily sold on the market is over," she said. "We also need actors in the art market to play an active role to protect cultural heritage worldwide. Museums are reviewing their acquisition policies, while collectors and auction houses are now paying more attention to provenance information and adhering to professional ethical codes of conduct."

The Smithsonian's Hanson says the demand for ancient artifacts, especially those like the Gilgamesh tablet that are connected to the origins of writing, remains high. And that makes it very easy, she said, "for bad guys to make a profit."

"We lose so much information when an artifact is looted, when it is ripped away from its archaeological context," she explained. Not only is the object removed from its country of origin, but its connection to history also is severed. For example, Hanson said, the systematic excavation of an artifact like the Gilgamesh would provide scholars with specific location data and other potentially significant details.

"We don't know what it was found around. Did it come from an intentional archive, or the trash? Was it carefully sealed for the future?" she said. "It's exciting to see it go back, and I want that joy to overcome the sadness of what we've lost."

Azoulay is expected to speak at the afternoon ceremony, as are Iraqi Ambassador Yasseen; Hassan Nadhem, Iraq's minister of culture, tourism and antiquities; and senior officials from the U.S. Departments of State, Justice and Homeland Security.