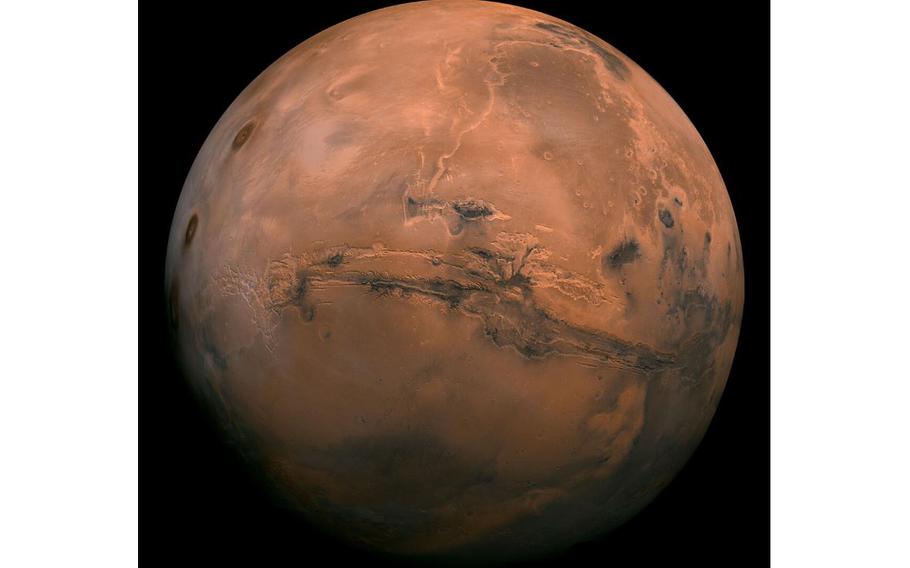 NASA is reorganizing to put a new emphasis on deep space, including setting up a new directorate to develop the technologies needed to pursue what would be some of the most ambitious missions NASA has ever attempted, including building a permanent presence on the moon and eventually Mars (shown above). (NASA)

With SpaceX now responsible for flying cargo and astronauts to the International Space Station, NASA is reorganizing to put a new emphasis on deep space, including setting up a new directorate to develop the technologies needed to pursue what would be some of the most ambitious missions NASA has ever attempted, including building a permanent presence on the moon and eventually Mars.

In an interview with The Washington Post, NASA Administrator Bill Nelson said the new directorate, known as Exploration Systems Development, will oversee the development of new tools, from habitats to rovers and propulsion systems, to help NASA push new frontiers.

The success of the agency’s partnership with a growing commercial space industry allows “NASA to get out of low Earth orbit and go explore,” Nelson said.

NASA is scheduled to announce the creation of the new directorate at a noon town hall meeting with agency employees. Jim Free, a former associate NASA administrator, will run the new directorate. Kathy Lueders, who leads the agency’s current Human Exploration and Operations Mission Directorate, will run a second new directorate, to be known as Space Operations. It will oversee programs once they transition out of development, such the space station, the commercialization of low Earth orbit, and in the years to come, operations on the moon, NASA said in a statement.

A reorientation of NASA operations has been anticipated, hastened by the success of SpaceX, which has been delivering cargo and supplies to the space station for years. Then last year, SpaceX flew the first mission of NASA astronauts to the space station, demonstrating that NASA no longer was the only player in getting astronauts to low Earth orbit. That reality was cemented last week, when SpaceX, the venture founded by Elon Musk, successfully flew four civilians on a three-day mission orbiting the Earth without any NASA involvement.

In addition to SpaceX, Northrop Grumman flies cargo to the station. And Boeing is under contract to fly astronauts there, though it has stumbled badly with the development of its Starliner spacecraft and is years behind schedule.

The ability to depend on commercial enterprises for low-Earth undertakings frees NASA to devote more attention to more ambitious missions.

“If you look out over the next two decades, what we have is a string of programs,” Deputy NASA Administrator Pam Melroy said in an interview. “We’re talking habitats, transportation systems like rovers. We’re talking infrastructure like power, communications, resource extraction. . . . The scope of what we have stretching out ahead of us, it’s very different than what we’ve done in the past.”

Nelson said the changes were made because the enterprise, from flying astronauts to the space station, to its Artemis program to get astronauts to the moon and then eventually to Mars, “got too big. One person can’t do it all.”

The two directorates will work together, he said, but Free’s job will be looking ahead to future missions and harnessing the technology that would make them happen, from new forms of propulsion to in-space manufacturing and mining.

“There’s so much new technology that has to be developed for the moon and Mars, as well as cultivating the international partnerships that are going to be with us,” Nelson said.

The change is unlikely to be greeted enthusiastically by all, especially in an enterprise where mistakes can be deadly. Critics are likely to say that the move creates another level of bureaucracy, requiring a separate budget and new channels to lawmakers, industry leaders and international partners, as well as the potential for competition between the two directorates.

Nelson said the changes are not a diminishment of Lueders’s responsibilities but rather “an enhancement of the tremendous success that she’s already achieved.”

Lueders oversaw the contract to build a spacecraft capable of landing astronauts on the moon that NASA awarded to SpaceX earlier this year. Jeff Bezos’s Blue Origin, which had bid $6 billion or twice as much as SpaceX and lost out on the contract, has alleged the procurement was badly flawed. It protested the decision to the Government Accountability Office, lost, and has since filed a lawsuit in the Court of Federal Claims. (Bezos owns The Post.)

The litigation has forced NASA to stop work on the contract.

The Artemis moon program has already seen several delays and getting astronauts to the surface by 2024, NASA’s goal, is not likely to happen. But Nelson said that the first mission of the program, known as Artemis I, is on track to launch the Orion spacecraft, without any astronauts on board, that would orbit the moon later this year or early next. The mission would be the first flight of NASA’s massive Space Launch System, which also has suffered years of delays.

The second flight, Artemis II, would be a crewed mission around the moon by the end of 2023, or early 2024, he said. But he was less confident about the timeline for landing astronauts on the surface.

“Obviously there have been delays,” Nelson said. “We’re in the middle of a legal cat fight right now. And who knows what’s going to happen after the federal judge rules. So, am I still holding 2024 as a goal? Yes. Oh, but I’m also realistic to know that there are a lot of things beyond our control.”