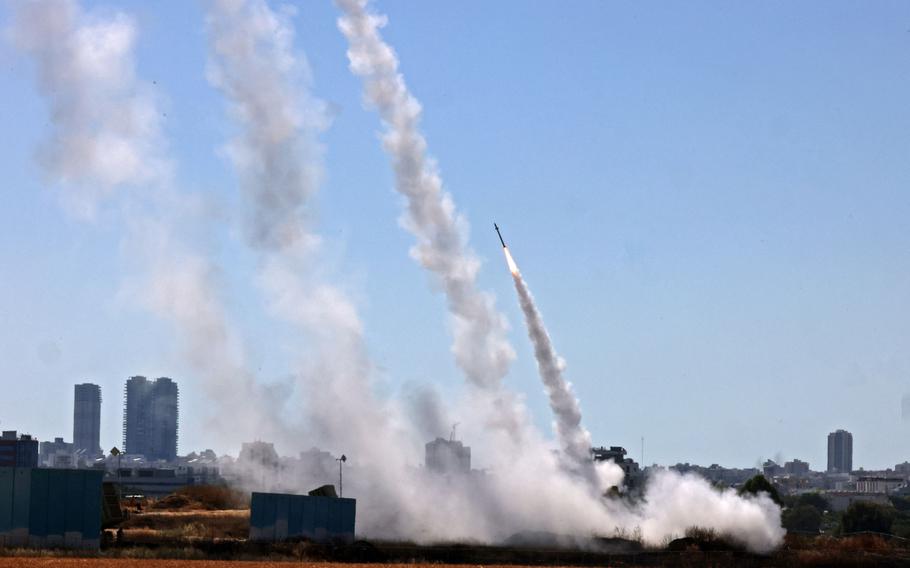 Israel's Iron Dome aerial defense system is activated to intercept a rocket launched from the Gaza Strip, controlled by the Palestinian Hamas movement, above the southern Israeli city of Ashdod, on May 12, 2021. (Emmanuel Dunand, AFP via Getty Images/TNS)

The proposed funding for Israel’s military is one of several noteworthy defense spending provisions in the continuing resolution, which was unveiled Tuesday. Once enacted later this month, the measure would fund federal operations through Dec. 3.

The continuing resolution would also include $2.2 billion for the Pentagon to support Afghans who fled their country last month. And the bill would allocate nearly $2 billion more for a variety of other Defense Department purposes, including to buy semiconductors and to help Defense Department facilities recover from natural disasters.

Under the continuing resolution, federal programs would continue to spend money at the fiscal 2021 levels into the next fiscal year, except as provided in so-called anomalies such as the money for Iron Dome, disaster relief and supporting Afghan refugees.

The new Iron Dome funds would be used “to counter short range rocket threats” and to meet “emergent requirements,” the bill says.

This money would come on top of more than $1.6 billion the United States has previously provided Israel to develop and build the system, which intercepts rockets such as those that Hamas has repeatedly fired into Israel.

The United States has an agreement to co-produce the Iron Dome, and the U.S. Army has also fielded a version of the system.

Since World War II, the United States has given Israel $146 billion in aid, mostly for weapons (not adjusting for inflation).

The United States and Israel have an agreement under which the U.S. government will allocate $38 billion from fiscal 2019 through 2028, including $5 billion for missile defense.

On other defense issues, the funding measure would include $885 million to continue to buy semiconductors used in military equipment from a facility that is going out of business.

The bill also would allow the Air Force to spend what is necessary to procure integrated circuits for GPS ground equipment at the rates needed to operate the system. A House Appropriations Committee summary of the bill says this provision is needed to avoid negatively affecting “military-code positioning, navigation, and timing weapon system requirements.”

The Navy, meanwhile, would receive $565 million “for necessary expenses related to the consequences of severe storms, straight-line winds, flooding, tornadoes, earthquakes, wildfires, and hurricanes occurring in calendar years 2020 and 2021.”

The Air Force would net $330 million to respond to Winter Storm Uri, which struck last February. Its effects included widespread blackouts in Texas.

The measure would require the Pentagon inspector general to review the U.S. military’s transport of Afghans out of their country last month and the care being provided for them at Defense Department facilities.

The bill also would mandate that the Pentagon report to the congressional Armed Services committees 90 days after the spending law’s enactment on the disposition of U.S. military equipment in Afghanistan.

Some of it was moved out of the country and some destroyed. Some ended up in the hands of the Taliban, though it is not clear how much of that gear is in working order or how effectively the Taliban can maintain it.

The measure also includes authorities to pay contractors for the cancellation of Afghanistan-related deals.