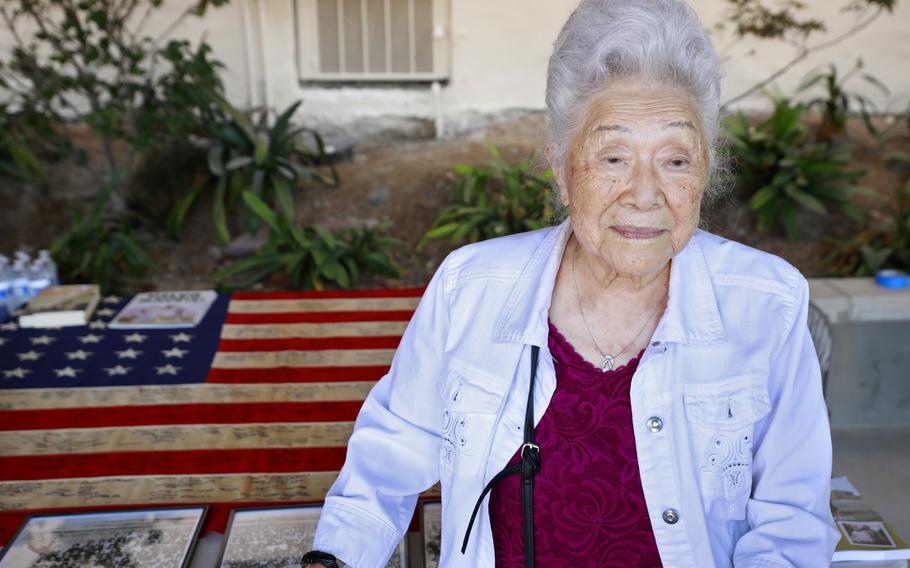 With the intent to recognize surviving Japanese Americans of the World War II incarceration camps for their sacrifice, and to honor their legacy and memory, Judge Johnny Gogo, a California Superior Court Judge from San Jose, obtained two WWII-era 48-star American flags with the intent of having survivors sign them. Yukiko Sugiyama, 100, was in Poston Internment Camp in Yuma. She signed the flag at the Buddhist Temple of San Diego on Sunday, Sept. 19, 2021. (K.C. Alfred, The San Diego Union-Tribune/TNS)

(Tribune News Service) — A Santa Clara County judge is on a mission to honor Japanese Americans who were put into internment camps during World War II — most of whom were American citizens and California residents — by having them sign their names on historic flags.

On Sunday, Judge Johnny Gogo brought two antique 48-star American flags to the Buddhist Temple of San Diego and asked former camp internees and their family members to sign their names onto the fabric. Gogo hopes one of the flags one day will be accepted and put on display by the Japanese American National Museum in Los Angeles.

The American flag featured 48 stars until 1959 when the states of Hawaii and Alaska were added to the union.

Gogo said he became interested in the history originally as part of an effort to raise awareness for Fred Korematsu Day, a state holiday signed into California law in 2010. Korematsu refused to comply with the internment order and his case made its way to the U.S. Supreme Court where, in 1944, the court upheld internment as legal. The decision is widely viewed as one of the court's worst. Fred Korematsu Day is Jan. 30, his birthday. He died in 2005.

Among the dozen or so former internees who signed were those who remembered clearly what happened in the 1940s — and those who were too young to realize what was happening to their families.

Yukiko Sugiyama, 100, was born and raised in Brawley, Calif., but was living in Oceanside when the order came from the U.S. government, she said. She was 21 and just a month from graduating from what is now called MiraCosta College when she, like thousands of other Japanese Americans, was forced to leave her life behind.

In February 1942, President Franklin D. Roosevelt signed Executive Order 9066, leading to the forced internment of about 120,000 Japanese Americans. They were scattered among 10 camps, mostly in the west. Sugiyama was sent to one of the three camps in Poston, Ariz.

"We didn't know where we were going to go," she said. "What are you going to do? You can't fight the government."

Sugiyama added her name to one of the two flags Gogo brought. He has so far traveled to Washington, Utah, Hawaii, Idaho and up and down California collecting names on the flags at similar events. He filled one up already and another is almost full. Most signers sign on the stripes. The stars, Gogo said, are reserved for internees who went on to serve in the military.

Hank Wada, 93, said he tried to join the Marines instead of going to the camp in 1942 — when he was 14 — but he was rejected because he was Japanese American.

Wada went on to serve in the Marines out of the air station in El Toro and fought in the Korean War. He said he wanted to come sign the flag to keep the memory of the injustice of the camps alive.

"I thought it was my duty to sign the flag and let everybody know what happened," Wada said. "There's so many people who don't know what happened to us because it's been too long and we didn't get much publicity."

Bacon Sakatani, 92, lives in West Covina, Calif., but regularly attends the flag-signing events in Southern California, he said. Sakatani was sent to the Heart Mountain Camp in Wyoming in 1942 where he served as a Boy Scout in one of the Camp's seven active Boy Scout troops. Sakatani went on to serve in the U.S. Army and also fought in the Korean War. He said he attends the events because it's important for people to know what happened.

Kenji Akahoshi, 79, is the minister at the temple. He was born in Lodi, Calif., two weeks after his family left their San Jose home in April of 1942. His family ended up at the Camp Amache internment camp in Granada, Colo. Although he was so young, Akahoshi said the internment remains a primal wound among Japanese Americans.

"Being rejected or not being accepted is a deep psychological scar," Akahoshi said. "My parents never said very much to us when we were growing up. We knew that we were in Amache but they didn't really say much about it."

Karen Himaka, who is Yukiko Sugiyama's daughter, said she struggles today with the assumptions people make about Japanese Americans.

"The thing that bothers me is when people look at us, they say 'oh, you're Asian,'" she said. "I'm an American, born and raised in San Diego. They look at us because we look different from them."

Himaka said her mother is still bitter about being ripped away from her life in Oceanside in 1942. Sugiyama agreed, but added that she's learned to live with it over the years.

"I can't forget it," Sugiyama said. "But it doesn't bother me anymore, I just live my own life."