Firefighters are girding Earth’s biggest tree; here’s how it got its name The largest tree in the world has lived through millennia, has been named for a Civil War general, and has shaded a socialist commune that briefly called it Marx. Now the centerpiece of Sequoia National Park is endangered by the California wildfires burning nearby.

The KNP Complex Fire — which comprises the Colony and Paradise fires — is torching the Sierra Nevada area and leading firefighters to wrap the giant trees in aluminum to protect them from the inferno that began Sept. 9 and had burned through 17,900 acres as of Saturday night.

The sequoias, believed to be some of the world’s most ancient, became a national landmark in the mid-19th century. Hamilton, General Grant, General Sherman and others are named for American leaders, and their histories enmeshed with the then-nascent country’s history and politics.

Sequoias, which can live to be about 3,000 years old, had already been known by the Native American tribes that inhabited the Sierra Nevada. Then, in the mid-1800s, the giant trees became a tourist attraction after a hunter had an encounter with what newspapers of the time deemed the “Sylvan Mastodon” or the “Vegetable Monster.”

According to a 1975 National Park Service history briefing, the crew of an 1833 expedition into the Sierra Nevada is credited as being the first group of White people to spot the sequoias, but it never reported the discovery. Almost two decades later, Augustus T. Dowd, a hunter tasked with feeding Gold Rush miners, chased a wounded bear into the woods and walked into a sequoia grove.

News spread fast, describing trees that dwarfed people. “It was the equivalent of finding a unicorn or Big Foot,” said Daegen Miller, a historian and author of “This Radical Land: A Natural History of American Dissent.”

Over the next several years, explorers, loggers, scientists and tourists flocked to the land of the massive trees. Carriage trips through the sequoias catered to sightseers, and hotels attracted Ralph Waldo Emerson and other environmentalists of the time.

The enormous trees, Miller said, caused a frenzy because the United States had a lack of pride in its offerings.

“White Americans felt really insecure because they felt like they didn’t have the culture that Europe had with its Roman ruins and old antiquities,” he said. “But when the sequoias burst into the American imagination, all of a sudden a lot of folks in the United States were like: Wow, Europe doesn’t have these trees that are several thousands of years old and hundreds of feet tall. No one has ever seen trees quite like this before.”

The issue then became how to name the new source of American grandeur. When specimens of the trees shipped to the East Coast got lost, British scientists beat everyone to the chase — naming the trees Wellingtonia gigantea for the Duke of Wellington in 1853. But “Americans weren’t going to have that,” Miller said. Instead they adopted the name given by a French scientist: Sequoia gigantea, in honor of Sequoyah, the Native American creator of the Cherokee writing system. 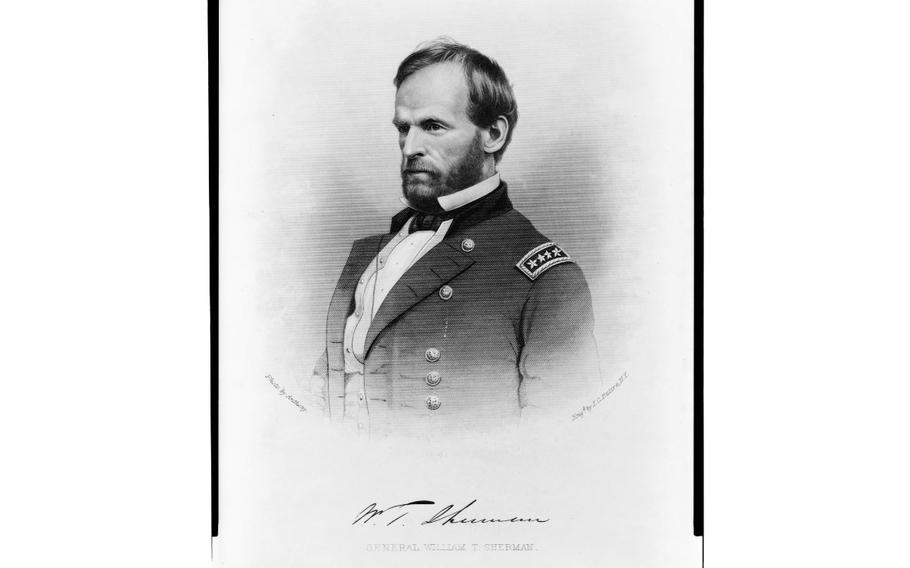 The study of these trees continued as the Civil War divided the nation. Although California was largely removed from the conflict raging to the east, its mostly pro-Union stance led to trees being named for some of the Army’s most prominent leaders. The second- and fourth-largest sequoias in the country were named in 1867 for Gen. Ulysses Grant, who would become president, and for Abraham Lincoln, who was assassinated two years prior.

Those trees named for American giants of the time pale in comparison to General Sherman, whose volume 52,508 cubic feet makes it the largest single-stem tree in the world. The 275-foot tree now estimated to be between 2,200 and 2,700 years old, was named in 1879 for William Tecumseh Sherman, a Union Army general and commander during the Indian Wars.

Known for his sense of military strategy and as a loyal friend to Grant, Sherman is hailed for his role leading to the Confederacy’s surrender — yet his tactics were often brutal. Employing scorched-earth tactics, Sherman’s march through Georgia and the Carolinas devastated cities and communities. Sherman, as an officer in the American Indian Wars, urged U.S. troops to “exterminate all the brutes.”

The tree’s name, Miller said, is one of the paradoxes in American culture. Its species name originated from a Cherokee man. The emblematic tree honors a general who killed Native Americans.

“So you get General Sherman, one of the most feared Indian fighters in the U.S., whose middle name, Tecumseh, is after an Indian resistance fighter, whose name then gets put onto a tree called the sequoia, brings out all these layers of irony,” Miller said. “It’s a really rich episode with many layers of irony and a tragedy, and the way that certain historical stories got erased or closed in a very specific way for specific political and cultural reasons.”

The ginormous tree’s current name is not the only one it has had. For five years, it was Karl Marx.

From 1886 to 1892, the Kaweah Colony, a socialist commune established itself amid the Sierra Nevada’s sequoia groves after its organizer, Charles Kellar, heard of the “vast timber region dotted with giant trees,” the Fresno Bee reported in 1936. With 40 colonists, Kellar organized a community whose economy was based on sustainable logging. But the colony’s utopian dream began faltering when it began selling lumber.

“That caught the attention of the head of the Southern Pacific Railroad, who saw the commune as an economic competitor because the railroad was the main lumber transporter from Oregon to the valley,” Miller said.

According to Miller, the Southern Pacific Railroad began pushing for the area to become a national park. In 1890, President Benjamin Harrison signed into law the creation of Sequoia, Yosemite and General Grant parks — with two of the first three national parks in the country protecting the sequoias and pushing out the Kaweah Colony.

Since then, the tree has been known by its original U.S. name, General Sherman. Its history, Miller says, underscores how Americans use “land for a sense of identity.”

“We look at the environment for our sense of home, and the way we name things opens up deeply fundamental questions to who we think we are,” he said. “There’s a politics to this culture, and it’s the politics that tells us who we are and what’s important about the world.”

Whether it is called General Sherman or Karl Marx, Miller said, the tree has framed centuries of American history that a fire cannot burn down.

“We’re seeing this moment where, again, people are rallying around it,” Miller said. “There’s something really heartening to see that we care.”