Child care workers are quitting rapidly, a red flag for the economy Andrea Dotts, 24, is a certified high school teacher but came to work at Begin With Us Pre-K Center in Altoona, Pa., at the start of the new school year. (Jeff Swensen/for The Washington Post)

South Shore Stars early childhood program in Weymouth, Mass., received zero applicants this summer for its preschool teacher positions. It was a big change from when Director Jennifer Curtis was superintendent of a local school district and routinely had 200 people apply for elementary school jobs.

The problem, Curtis said, is day care workers typically make about $12 an hour and work a demanding job year-round. Public schools and other employers, who are also scrambling to hire workers, are poaching child care workers by offering thousands of dollars more a year and better benefits. A nearby Dunkin’ starts pay at $14 an hour.

People tell Curtis they’ll come to South Shore Stars as a “last resort” if they can’t find anything else.

Hiring and retaining good workers has been tough in the child care industry for years, but it is escalating into a crisis. Pandemic-fueled staffing challenges threaten to hold back the recovery, as the staffing problems at day cares have a ripple effect across the economy. Without enough staff, day cares are turning away children, leaving parents — especially mothers — unable to return to work.

Nearly 1.6 million moms of children under 17 are still missing from the labor force. They dropped out during the pandemic to care for children and have not been able to return to work as the school and day care situation remains chaotic, especially for unvaccinated children under the age of 12. There are still COVID outbreaks occurring at schools, and some childcares and after-school programs remain closed or they are accepting fewer children.

Even the White House is concerned. In a new report this past week, President Joe Biden’s Treasury Department called the current child care system “unworkable” with high costs for parents, low wages for workers and not enough spots for kids.

“Child care is a textbook example of a broken market,” said Treasury Secretary Janet Yellen, a mother herself. She pointed out that families pay, on average, 13% of their income on child care for young kids, yet day care workers earn so little they rank in the bottom 2% of all professions. Biden has proposed the largest federal investment ever in child care in an effort to transform the sector.

“This is a crisis,” said Diane Barber, executive director of the Pennsylvania Child Care Association. “Parents are looking for child care, but now it’s this Catch-22. We don’t have the staff, so we can’t open the classrooms, so families can’t go back to work because they can’t find child care.”

The numbers are staggering: The child care services industry is still down 126,700 workers — more than a 10% decline from pre-pandemic levels, Labor Department data shows. While many industries complain they can’t find enough workers, the hiring situation is more dire in child-care than restaurants right now.

Young women in their late teens and 20s who are typically drawn to work at day-care centers are opting instead to take jobs as administrative assistants, retail clerks and bank tellers, according to interviews with former workers and day care owners. Veteran child care workers are quitting. One day care worker interviewed for this article quit in the past week. Several others indicated they are contemplating exiting soon. More than 10,000 workers have left the industry since June, Labor Department data show.

“The pay is absolute crap for what’s required for the position,” said Tanzie Roberts, who quit in June. “I can’t afford to live on my own and work the child care jobs that I am qualified for.”

Roberts now works from her Florida home doing administrative work for a tech company. She says she really misses working with kids but could not survive on the low wage at the day care. Her new job does not expose her to COVID and pays more than $15 an hour with health insurance — a significant increase from the $11.45 she made working at a national chain day-care center.

More than a third of child care providers are considering quitting or closing down their business within the next year, as a sense of hopelessness permeates the industry, according to a report last month from the National Association for the Education of Young Children. Over half of minority-owned centers are in danger of shutting, the report warns. Barber, who runs the child care group in Pennsylvania, says she now spends much of her day trying to talk day care owners “off the ledge” so they don’t close. Jolie Cover started Begin With Us 30 years ago in Altoona, Pa., and describes 2021 as the hardest year in her career. (Jeff Swensen/for The Washington Post) 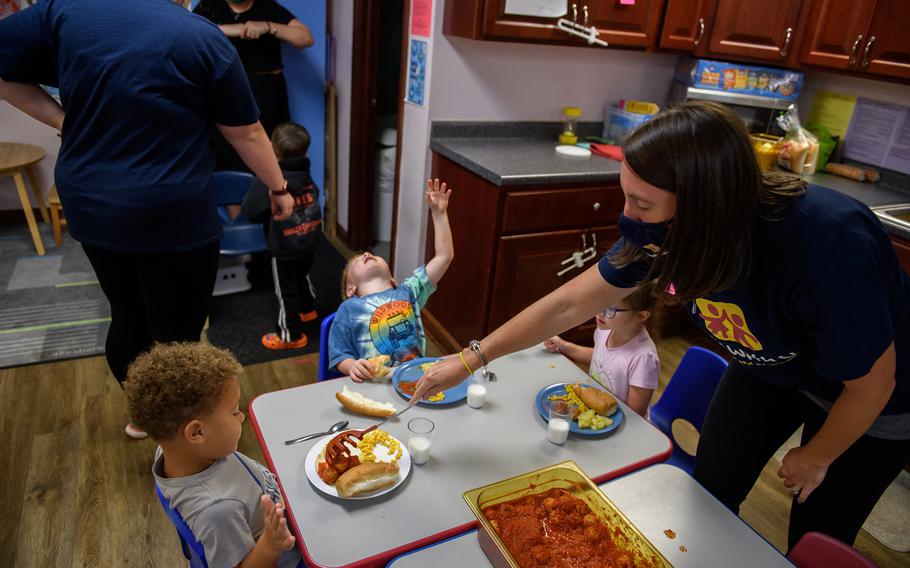 Kelly Soyka, 34, serves a meal at Begin With Us Pre-K Center in Altoona, Pa. (Jeff Swensen/for The Washington Post) 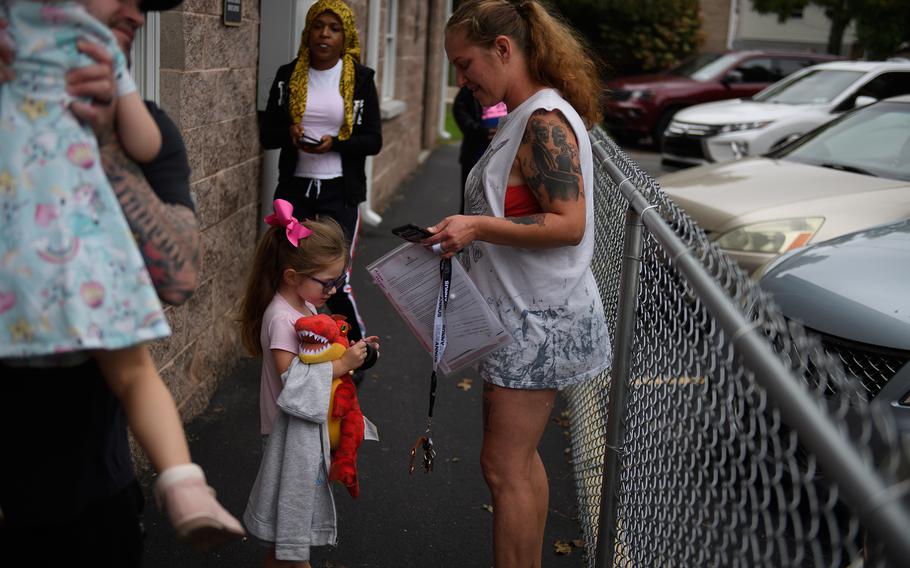 Alessa Morgan, 3, leaves her pre-school program at Begin With Us Pre-K Center in Altoona, Pa. (Jeff Swensen/for The Washington Post) Chelsea Hallinan, 37, organizes children's take-home packets while they nap at the Begin With Us Pre-K Center in Altoona, Pa. (Jeff Swensen/for The Washington Post)

Centers that serve working-class families or those in rural areas are especially in danger of closing as directors say they can’t raise costs.

“We don’t have our toddler room open right now. Even the infant room isn’t currently full, because we don’t have enough staff,” said Sky Purdin, director of development at Jasmin Child Care and Preschool in Fargo, N.D., which serves low-income families. “We can’t match Walmart offering $15 or up. We are a small child care center and we are not able to provide benefits. People are going to jobs that have benefits.”

For years, there have been calls to pay child care workers more, as the median pay in the industry — $25,460 a year, according to the Labor Department — is below the poverty line for a family of four. During the coronavirus pandemic, the work has become even harder as staff must ensure kids as young as two and three wear masks and don’t touch each other.

The reason child care centers pay less than service sector jobs is tied to their business model. Staffing costs are by far the biggest budget item at day-care centers, as many must abide by local laws that mandate one caregiver per three to five kids, depending on the ages of the kids and the area of the country. Childcare labor costs can be as much as 50 to 60%t of a day-care budget, according to a Treasury report. By contrast, restaurant labor costs tend to be about 30% of their budgets.

A study conducted during the pandemic by Philip Sirinides, director of the Institute of State and Regional Affairs at Penn State Harrisburg, found labor costs account for 80% of a child care center’s budget. Raising pay for workers typically requires hiking fees for parents.

“Child care providers have very narrow margins. They have to be at full capacity. That’s the only way the business model works for them,” said Sirinides.

Lawmakers in Washington, D.C., approved $39 billion in child care relief in March as part of the Democrats’ American Rescue Plan, with the bulk of the money going toward “stabilization funds” that child care centers can use for anything from worker pay to fixing the roof to buying masks. Months later, only 14 states have their applications up and running so child care centers can apply for funding, according to the U.S. Department of Health and Human Services.

The funding is viewed as a short-term fix by economists and day care owners who say it would not be enough to permanently raise pay in the industry.

“I’m already known as the most expensive day care in town,” said Jordyn Rossignol, owner of Miss Jordyn’s Child Development Center in rural Caribou, Maine. “We need significant public investment to stay open. The days of only surviving off tuition from parents and off the backs of working families is done.”

Rossignol said she has lost 24 staff members since the pandemic started. Nearly all told her they quit because they can make more money elsewhere. She pays $12.15 to $14 an hour, depending on experience. Among her former employees, two are working as bank tellers now, one went to a trucking company. Many became nannies. Her best toddler teacher now works across the street at a paint store.

Biden and top Democrats in Congress want to spend about $450 billion on child care as part of a sweeping $3.5 trillion bill, which would be the largest ever investment in federally backed child care programs. The legislation would reduce child care costs for low and middle-income families, and offer higher wages to caregivers, while providing free prekindergarten to all 3- and 4-year-olds.

Republicans and some moderate Democrats, such as Sen. Joe Manchin III from West Virginia, are balking at the high price of the overall bill. They want to see a smaller package, where aid is more targeted to those most in need. Manchin said “It’s not the federal government’s responsibility to educate all our children,” to reporters from his state in May.

Roberts, the former child care worker who quit in June, grew up dreaming of becoming a teacher. But she says it was disheartening to learn that day care workers with 20 years more experience than her still made less than $15 an hour. During the pandemic when she had to get toddlers to keep their masks on and not touch each other, she was given a raise of 15 cents per hour.

A day care worker named Danielle in central Florida who is in her 30s said she is thinking of quitting. She asked that her full name not be used for fear of retribution from her employer, a national child care chain. Her job does not offer health insurance. She babysits and grooms pets on weekends to make ends meet.

“I make $11 an hour and I’m exhausted,” Danielle texted on a brief break. “My credit cards are almost maxed out and my savings are dwindling. It’s not looking good ... I stay because I love the kiddos. It breaks my heart to think about having to find a new job.”

Another problem that child care providers cite in hiring staff is increased difficulty in obtaining the necessary criminal background checks for workers during the pandemic, especially from state government offices. Child care centers are required to fingerprint potential hires and check to ensure a new hire is not listed on the sex offender registry and has not committed child neglect or abuse in any state they lived in during the past five years. Some states have been especially slow to release background checks during the pandemic, numerous child care directors and advocates told The Washington Post.

Still, the top concern in the industry is how to raise pay. Among college graduates, those who major in early childhood education earn the least out of 137 majors, according to a report from Georgetown University’s Center on Education and the Workforce.

Jolie Cover called this the hardest year in her 30 years running Begin With Us Child Care and Preschool in Altoona, Pa. She is struggling to get applicants with even an associate’s degree or basic certificate.

“Our country needs to look at what we really value. We should value our youngest learners,” Cover said. “Our youngest kids should be cared for and educated in settings that are no less than what they receive in K-12 school districts.”

The Washington Post’s Andrew Van Dam contributed to this report.