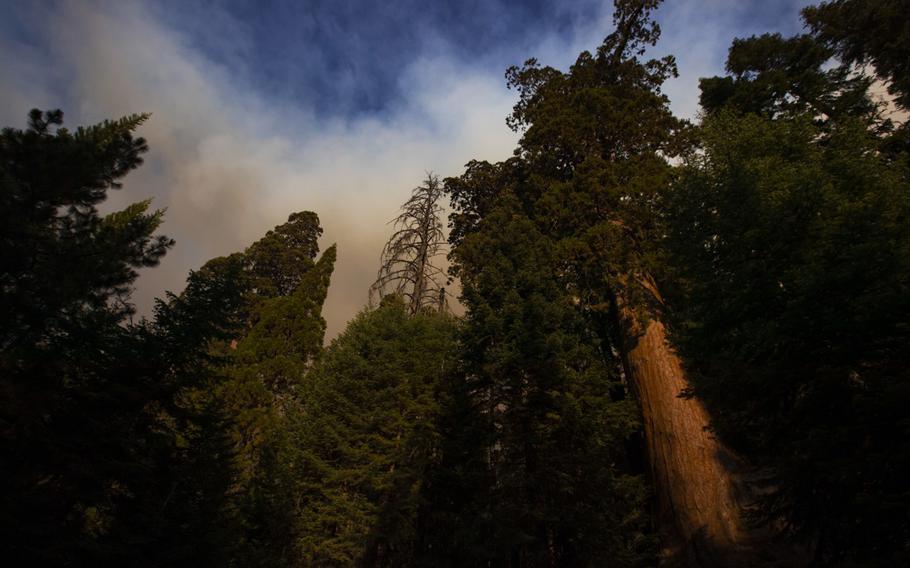 (Tribune News Service) — Wrapped in fire-resistant aluminum, the Giant Forest trees in Sequoia National Park remained safe from the encroaching KNP Complex fire on Friday, even as crews worked to prepare the 2,000-tree grove from flames that appear imminent.

Fire officials sounded the alarm Thursday that the blaze — made up of the Paradise and Complex fires — could reach the grove that included the 275-foot General Sherman Tree within the day, a grim forecast that did not come to pass.

While growth appeared to slow , the lightning-sparked fires that ignited a week ago — and so far have 11,365 acres — continued to burn with no containment, sending massive plumes of dense smoke over what’s typically a popular tourist destination, fire officials said.

“It’s moving pretty slow because normally it would have raced up that hill,” said Mark Garrett, spokesperson for the KNP Complex fire. An inversion layer over the fire hasn’t lifted for several days, clamping down smoke and also suppressing fire activity, he said.

Flames were within a mile of the grove on Thursday, and Garrett said it appeared it had not moved much by the following morning.

In an effort to prepare the towering trees — which can rise above 250 feet and live more than 3,000 years — crews on Thursday had wrapped some of their bases in a fire-resistant aluminum material akin to tinfoil, and images posted on social media showed the stately General Sherman with a metallic band around its enormous trunk. Vegetation that could serve as fuel for the fire was also cleared.

Firefighters continued their work Friday in anticipation of flames that could reach the grove within the next few days, constructing containment lines and figuring out the logistics of how to bring water to the area should it be needed, according to Mark Garrett, spokesperson for the KNP Complex fire.

More personnel are arriving following the fire’s elevation to one of the top firefighting priorities in the state, including four more hot shot crews, officials said.

“We’re really prepared to attack that thing once it does get up into the Giant Forest,” Garrett said.

Giant sequoia are adapted to withstand wildfire and even leverage it to reproduce, with flames heating their cones to release seeds. But increasingly high-intensity fires, fueled by drought and climate change, are threatening to betray that ecological contract.

Last year’s Castle fire wiped out 10% of the giant sequoia population — equating to thousands of the massive trees felled by the ferocious blaze.

But there’s cause for optimism for this particular operation, officials said. The grove has been subjected to numerous prescribed burns since the 1960s, and has one of the oldest prescribed fire histories on the West Coast, according to Jon Wallace, an operations section chief for the KNP Complex fire.

It’s a tactic officials say effectively clears much of the understory and overgrowth that can act as fuel for the fires — work credited with with protecting the Giant Forest from the 150,000-acre Rough fire in 2015.

“So this area is probably not going to have quite the intensity of fire that we have in other areas,” Wallace said during a recent briefing.

To the south, in Sequoia National Forest, the Windy fire — which has already burned into a grove of giant sequoias — has grown to 6,849 acres with no containment, prompting evacuation orders and warnings for nearby communities threatened by the blaze.

The Tulare County Sheriff’s Office on Thursday ordered the evacuation of Johnsondale and nearby Camp Whitsett. Warnings are in effect for the communities of Ponderosa and Quaking Aspen, and there are road closures in the area.

Lighting ignited the Windy fire Thursday in the Tule River Indian Reservation. It soon pushed into the national forest, and by the beginning of the week, had crept into the Peyrone sequoia grove, within the Giant Sequoia National Monument, and is threatening other groves.

Crews have attempted to survey the Peyrone grove — located on the northern perimeter of the blaze — for potential damage, but the location amid steep, inaccessible terrain has stymied a close look. Officials said it could take several days to complete a preliminary assessment.