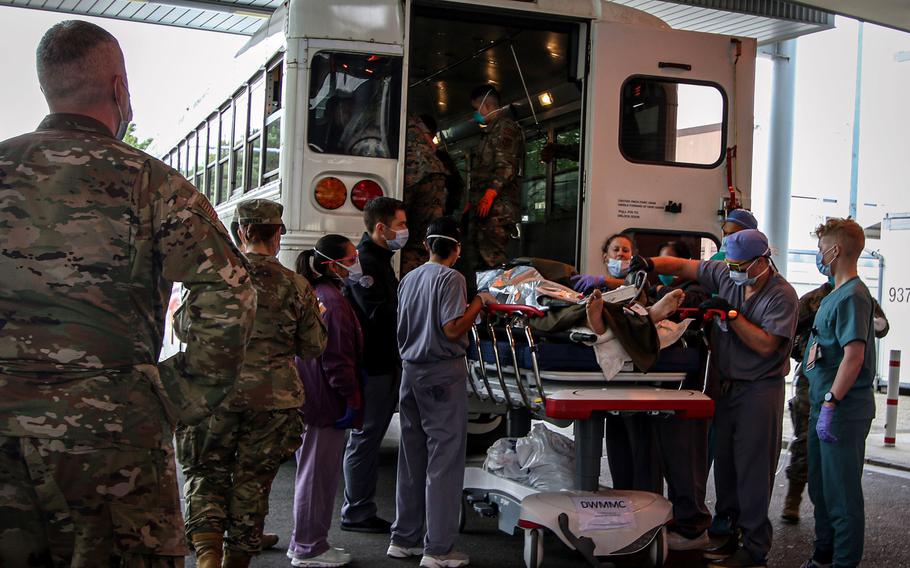 SANTA ANA, Calif. (Tribune News Service) — Purple Hearts are being posthumously awarded to the 13 American service members who died last month in the bombing attack of the Kabul airport. Seventeen others wounded in the blast as they helped process evacuees trying to flee Afghanistan before U.S. troops withdrew have also been approved to receive the special honor. A dozen more Purple Hearts are pending final approval.

In each case, the decision to award the medal was made by U.S. Central Command, said Yvonne Carlisle, a spokesperson for the Marine Corps.

On Tuesday, Sept. 14, Marine Corps officials said that seven of the original 15 Marines who were injured in the airport blast remain at Walter Reed National Military Medical Center. Two are in critical, but stable condition, said Capt. Johnny Henderson, a Marine spokesperson. The others are considered to be in serious, but stable condition. Their names are not being released.

Three Southern California natives, Marines Cpl. Hunter Lopez, 22, of Indio, Lance Cpl. Dylan R. Merola, 20, of Rancho Cucamonga, and Lance Cpl. Kareem M. Nikoui, 20, of Norco, are among the service members receiving the honor posthumously; the medals will go to their next of kin. Funerals are planned this weekend for Lopez and Nikoui and next week for Merola.

The Purple Heart is a solemn distinction of sacrifice given to U.S. service members "injured or killed by the action of an enemy of the United States." More than 1.8 million Purple Heart medals have been presented to service members since the award was created in 1782, according to the National Purple Heart Hall of Honor. It is the nation's oldest combat medal.

In 2012, California was the first in the nation to become a Purple Heart State after the California Legislature passed a resolution initiated by then-Assemblyman Paul Cook — he's now a San Bernardino County supervisor. The resolution means the state in various ways recognizes the service and sacrifice of it Purple Heart veterans who have died or were injured.

Today in California, there are 20 chapters of the Military Order of the Purple Heart with 3,000 registered members. Like other veteran's groups, such as the American Legion and Veterans of Foreign Wars, these chapters provide a place for service members to share stories and get support, financial aid and other needed services.

"The chapters are where Purple Heart members can meet. We help veterans in need and refer them to other organizations," said Jim Anderson, of Bakersfield. He belongs to the Folsum chapter and was a past department commander of the group.

Anderson, 75, who served in the Navy during the Vietnam War, received his distinction after being wounded while on a Navy patrol boat that hit a mine.

For the families of those who have posthumously received the medal, the chapters are a way to remember their fallen service member. Spouses, parents and children can join as an associate members.

"Talking to a Purple Hearter makes you more at ease," Anderson said. "Talking about injuries and how it happened. Someone that's gone through it understands more about what you're feeling."

Don Pageler, 75, of Westminster, said he spent decades hiding his Purple Heart. "Much of what I had to deal with was survivor's guilt."

In 1967, during the Six Day War, he was on the USS Liberty when it was attacked by the Israeli Air Force and Navy. There were 34 aboard who were killed and 171 who were injured by a torpedo blast.

It took him more than 20 years to seek help after suffering physically and emotionally. Meeting with other combat-injured vets helped. Now, he goes to local schools and teaches students about military history through his own experiences.

Pageler said he expects those who survived the Kabul airport attack may need a similar outlet.

"These guys will carry a lot of pain and anger from what happened," he said. "If they can't talk about it, they can't work through it emotionally. That's what these organizations are about; it's a place to feel safe."

But it may take time, he said. "They won't be ready to join groups. Often, it's not till later in life that we reach out for that help."