Trump: Try Milley for treason if book is true 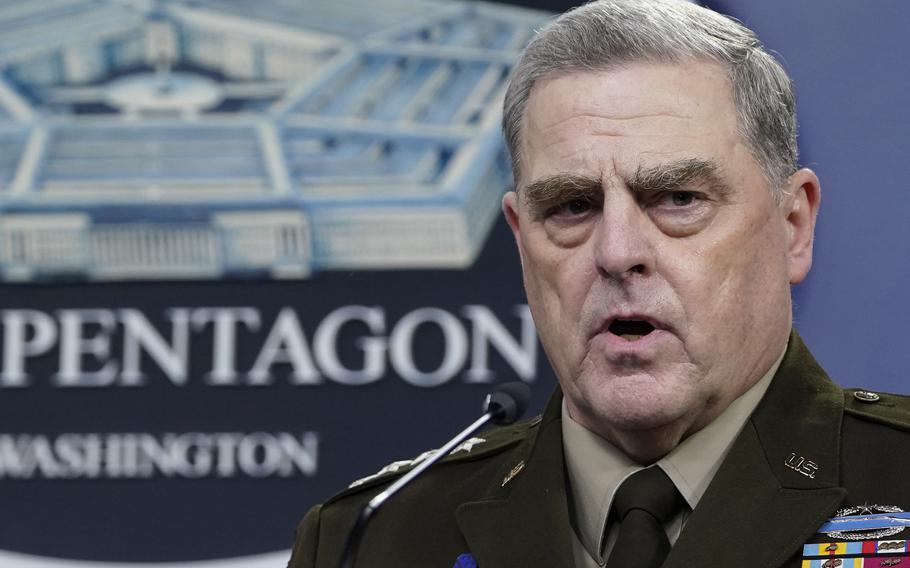 Chairman of the Joint Chiefs of Staff Gen. Mark Milley speaks during a briefing with Secretary of Defense Lloyd Austin at the Pentagon in Washington, on Sept. 1, 2021. (Susan Walsh)

WASHINGTON — Fearful of Donald Trump's actions in his final weeks as president, the United States' top military officer twice called his Chinese counterpart to assure him that the two nations would not suddenly go to war, a senior defense official said Tuesday after the conversations were described in excerpts from a forthcoming book.

Chairman of the Joint Chiefs of Staff Mark Milley told Gen. Li Zuocheng of the People's Liberation Army that the United States would not strike. One call took place on Oct. 30, 2020, four days before the election that defeated Trump. The second call was on Jan. 8, 2021, just two days after the insurrection at the U.S. Capitol by supporters of the outgoing chief executive.

Trump said Milley should be tried for treason if the report was true.

Milley went so far as to promise Li that he would warn his counterpart in the event of a U.S. attack, according to the book "Peril," written by Washington Post journalists Bob Woodward and Robert Costa. The Associated Press obtained a copy of the book. Details from the book, which is set to be released next week, were first reported by The Washington Post on Tuesday.

"General Li, I want to assure you that the American government is stable and everything is going to be okay," Milley told him in the first call, according to the book. "We are not going to attack or conduct any kinetic operations against you."

"If we're going to attack, I'm going to call you ahead of time. It's not going to be a surprise," Milley reportedly said.

According to the defense official, Milley's message to Li on both occasions was one of reassurance. The official questioned suggestions that Milley told Li he would call him first, and instead said the chairman made the point that the United States was not going to suddenly attack China without any warning — whether it be through diplomatic, administrative or military channels.

Milley also spoke with a number of other chiefs of defense around the world in the days after the Jan. 6 riot, including military leaders from the United Kingdom, Russia and Pakistan. A readout of those calls in January referred to "several" other counterparts that he spoke to with similar messages of reassurance that the U.S. government was strong and in control.

Trump responded with a sharply worded statement dismissing Milley as a "Dumbass," and insisting he never considered attacking China.

Still, he said that if the report was true, "I assume he would be tried for TREASON in that he would have been dealing with his Chinese counterpart behind the President's back and telling China that he would be giving them notification 'of an attack.' Can't do that!"

"Actions should be taken immediately against Milley, and better generals in our Military, of which we have many, should get involved so that another Afghanistan disaster never happens again," Trump said.

The second call was meant to placate Chinese fears about the events of Jan. 6. But the book reports that Li wasn't as easily assuaged, even after Milley promised him: "We are 100 percent steady. Everything's fine. But democracy can be sloppy sometimes."

Milley believed the president suffered a mental decline after the election, agreeing with a view shared by House Speaker Nancy Pelosi in a phone call they had Jan. 8, according to officials.

Pelosi had previously said she spoke to Milley that day about "available precautions" to prevent Trump from initiating military action or ordering a nuclear launch, and she told colleagues she was given unspecified assurances that there were longstanding safeguards in place.

Milley, according to the book, called the admiral overseeing the U.S. Indo-Pacific Command, the military unit responsible for Asia and the Pacific region, and recommended postponing upcoming military exercises. He also asked senior officers to swear an "oath" that Milley had to be involved if Trump gave an order to launch nuclear weapons, according to the book.

Officials in January and on Tuesday confirmed that Milley spoke with Pelosi, which was made public by the House speaker at the time. The officials said the two talked about the existing, long-held safeguards in the process for a nuclear strike. One official said Tuesday that Milley's intent in speaking with his staff and commanders about the process was not a move to subvert the president or his power, but to reaffirm the procedures and ensure they were understood by everyone.

It's not clear what, if any, military exercises were actually postponed. But defense officials said it is more likely that the military postponed a planned operation, such as a freedom of navigation transit by a U.S. Navy ship in the Pacific region. The defense officials spoke on condition of anonymity to discuss private conversations.

Milley was appointed by Trump in 2018 and later drew the president's wrath when he expressed regret for participating in a June 2020 photo op with Trump after federal law enforcement cleared a park near the White House of peaceful protesters so Trump could stand at a nearby damaged church.

In response to the book, Sen. Marco Rubio, R-Fla., sent President Joe Biden a letter Tuesday urging him to fire Milley, saying the general worked to "actively undermine the sitting Commander in Chief of the United States Armed Forces and contemplated a treasonous leak of classified information to the Chinese Communist Party in advance of a potential armed conflict with the People's Republic of China (PRC)."

Sen. Ted Cruz, R-Texas, called the report "deeply concerning," telling reporters at the Capitol: "I don't know if the quotes are accurate or not, but if they are, that is a gross violation of the chain of command. I think the first step is for General Milley to answer the question as to what exactly he said."

Sen. Dick Durbin, D-Ill., said he had no concerns that Milley might have exceeded his authority, telling reporters that Democratic lawmakers "were circumspect in our language but many of us made it clear that we were counting on him to avoid the disaster which we knew could happen at any moment."

A spokesperson for the Joint Staff declined to comment.

Milley's second warning to Beijing came after Trump had fired Secretary of Defense Mike Esper and filled several top positions with interim officeholders loyal to him.

The book also offers new insights into Trump's efforts to hold on to power despite losing the election to Democrat Biden.

Trump refused to concede and offered false claims that the election had been stolen. He repeatedly pressed his vice president, Mike Pence, to refuse to certify the election results at the Capitol on Jan. 6, the event that was later interrupted by the mob.

Pence, the book writes, called Dan Quayle, a former vice president and fellow Indiana Republican, to see if there was any way he could acquiesce to Trump's request. Quayle said absolutely not.

"Mike, you have no flexibility on this. None. Zero. Forget it. Put it away," Quayle said, according to the book.

Trump was not pleased.

"I don't want to be your friend anymore if you don't do this," Trump replied, according to the book, later telling his vice president: "You've betrayed us. I made you. You were nothing."

"Peril" describes Trump's relentless efforts to convince Attorney General William Barr that the election had been stolen. Barr is quoted as telling Trump, "The Justice Department can't take sides, as you know, between you and the other candidate." According to the book, Barr had determined that allegations about rigged voting machines "were not panning out." Barr also expressed disgust with Rudolph Giuliani and others insisting Trump had won, calling them a "clown car."

Trump's office had no immediate comment on the book.