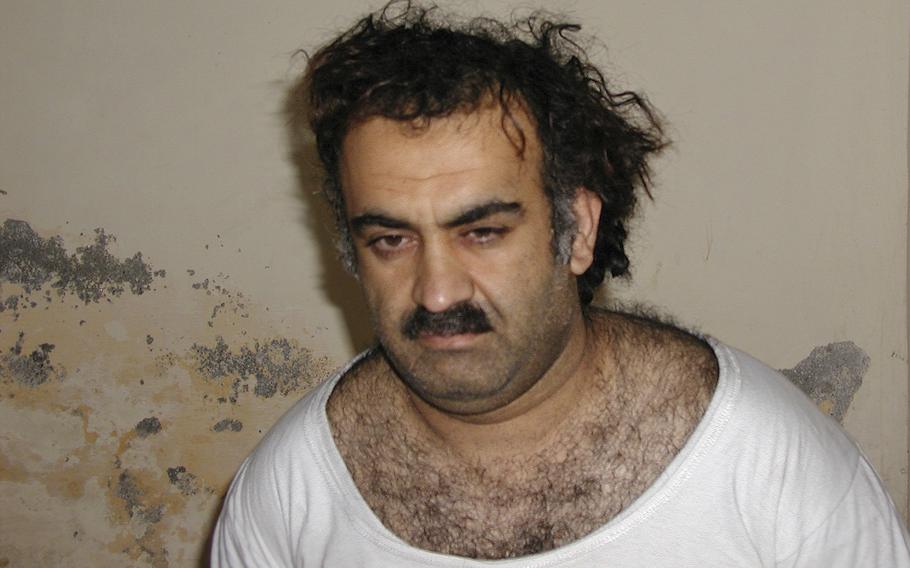 In this March 1, 2003 file photo obtained by The Associated Press, Khalid Sheikh Mohammed is seen shortly after his capture during a raid in Pakistan. The leading propagandist of al-Qaida, labeled the “principal architect of the 9/11 attacks” by the 9/11 Commission, he was captured by the CIA and Pakistan’s secret police, then spirited to CIA prisons in Poland and Afghanistan and finally to Guantanamo. (AP)

BOSTON (Tribune News Service) — Guantanamo Bay detainee Khalid Sheikh Mohammed and four others are finally getting closer to a trial for the 9/11 attacks in what one top ex-commander says exposes the “moral cowards” overseeing the case.

Pre-trial hearings kicked off Tuesday at the military prison in Cuba after a year-plus delay due to the pandemic. Khalid Sheikh Mohammed is the alleged mastermind of the terror attacks 20 years ago this Saturday and faces 2,976 counts of murder.

It’s been a maddening process, at times, that has been fraught with legal delays and new judges for the military tribunal.

All the accused face military execution if found guilty of conspiring with the hijackers who launched a coordinated attack on the U.S. on Sept. 11, 2001 — including on two jets that took off from Logan International Airport that sunny morning. Nearly 3,000 were killed that day on the four hijacked jets.

They all are “alleged to be responsible for the planning and execution of the attacks. ... These charges allege a long-term, highly sophisticated, organized plan by al-Qaeda to attack the United States of America,” as the Herald reported in 2008 when the charges were announced.

Kirk Lippold, the former commander of the USS Cole that was also targeted by terrorists, told the Herald Tuesday two decades is too long to wait for justice.

“These terrorists have been given more accommodations than the families who seek justice,” said Lippold, who is an adjunct professor at the Naval Academy.

Suicide bombers in a boat packed with explosives attacked the Cole during refueling on Oct. 12, 2000, in the Port of Aden. That attack killed 17 sailors.

Lippold, who is also a speaker and author, said the judges overseeing this tribunal have “allowed the defense team to dictate the scope and pace of the trial.” He added the judges have been “moral cowards, to date.”

He added: “Life is not fair. It comes with a moral and ethical component and these families deserve to see these terrorists held accountable for their acts.”

The Cole ambush was a prelude to the 9/11 terror attacks — a tragic day Lippold said he fears is being lost to history.

“There’s a generation of young people who weren’t alive when 9/11 happened. We have to remind them,” he said earlier this year when he also predicted the pullout in Afghanistan, adding that will just allow terror groups to gain strength.