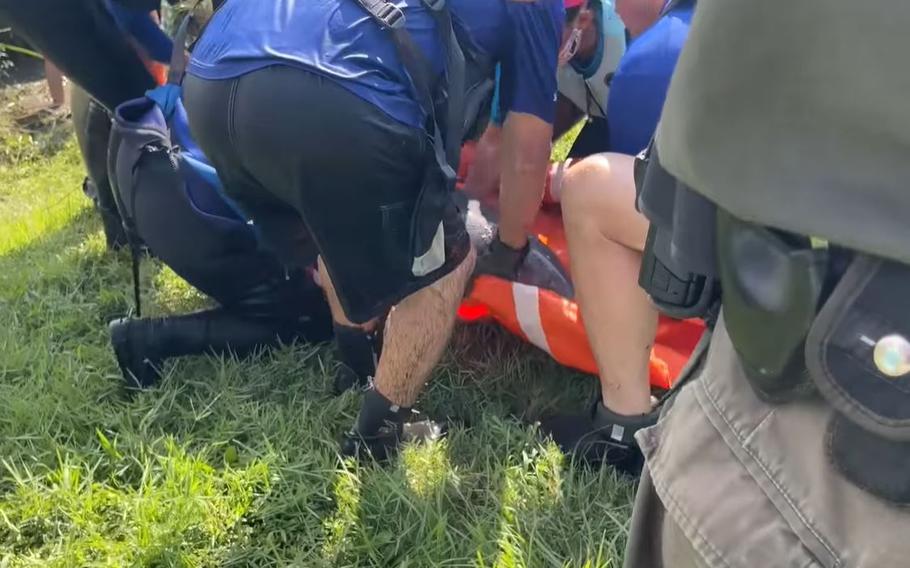 Crews wrap a baby dolphin that got stranded in a lake because of a Hurricane Ida. Veterinarians determined the dolphin was OK, and it was released back into the Gulf of Mexico. (Facebook)

(Tribune News Service) —A young dolphin trapped in a Louisiana retention pond since Hurricane Ida was released back to the ocean this week.

The Slidell Police Department posted a video compilation of the Sunday morning rescue at the Schneider Canal, which it said took a “massive group effort” led by the National Oceanic and Atmospheric Administration. The rescue involved getting the dolphin out of the pond and to a research organization to be examined before being released.

The video shows rescuers using a large net to corral the dolphin then carrying it out of the water using a tarp.

The dolphin was then put in a tank of water in the back of a truck to be taken to the Institute for Marine Mammal Studies in Gulfport, Miss., and checked out by veterinarians. The video shows the dolphin getting a law enforcement escort to the institute.

Veterinarians later determined the dolphin was OK, and it was released back into the Gulf of Mexico on Sunday, police said.

The IMMS said the juvenile dolphin got separated from its pod during Hurricane Ida, which made landfall in southeastern Louisiana as a Category 4 storm on Aug. 29. It then got pushed into the retention pond by rising waters caused by Ida on Aug. 30, the institute said.

The Louisiana Department of Wildlife and Fisheries has warned residents in the aftermath of Hurricane Ida that other wildlife may have been displaced by flood waters or driven into unfamiliar habitats as they sought higher ground, including residential areas.

“LDWF urges citizens to minimize contact with animals while they seek temporary refuge from their flooded home range,” the agency said. “Wild animals not posing a threat to humans should be left alone and should not be fed. Feeding wild animals will encourage those animals to remain in the vicinity of a new food source when they should be allowed to find natural habitat and food sources on their own.”

The IMMS said it attached a satellite tag to the dolphin before it was released into the wild Sunday.

“IMMS will be tracking the dolphin’s location through the satellite transmissions,” the organization said. “Thanks to everyone for their support and concerns!”