That time America almost had a 30-hour workweek 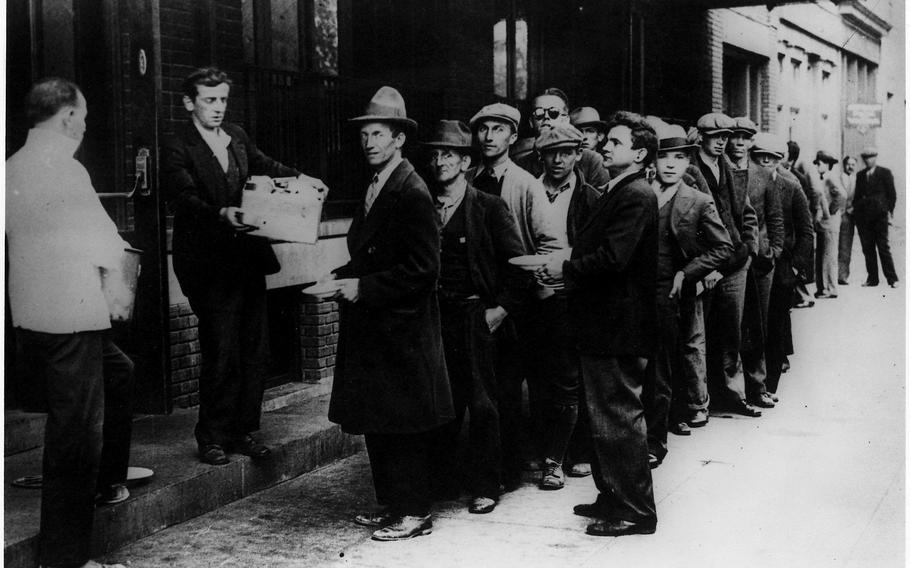 A long line of people waiting to be fed in New York City during the Great Depression. (Franklin D. Roosevelt Library/National Archives and Records Administration)

The nature of work has undergone a lot of changes during the pandemic. Millions of office workers began working from home; the service industry has struggled to get workers to come back, and some businesses, like Kickstarter, are now experimenting with four-day workweeks — without reducing salaries. In Congress, Rep. Mark Takano, D-Calif., has introduced legislation to make a 32-hour workweek standard.

This “Great Reassessment” of labor feels revolutionary. But we have been here before. In 1933, the Senate passed, and President Franklin Roosevelt supported, a bill to reduce the standard workweek to only 30 hours.

Americans have worked hard, perhaps too hard, since the Colonial era. English and other European colonists often had to work longer and harder on farms here than in the Old World, and a philosophy of working from sunrise to sunset prevailed, according to the Economic History Association. The Massachusetts colony even passed a law requiring a 10-hour minimum workday.

In the 1830s, workers in manufacturing were on the job roughly 70 hours a week, often in horrendous and even deadly conditions. By the 1890s that had dropped to about 60 hours. This period also saw the rise of labor unions, the creation of Labor Day as a national holiday, Grand Eight Hours Leagues and the motto “Eight hours for work, eight hours for rest, eight hours for what you will.” At that time, “what you will” did not include Saturday; workweeks were generally six days with only Sunday off.

The eight-hour day picked up in popularity in the decades preceding the Great Depression. Federal workers, railroad workers and Ford Motor Co. employees all moved to eight-hour shifts. CEO Henry Ford first instituted a six-day, 48-hour workweek for male factory workers in 1914, according to History.com. In 1926, a five-day, 40-hour workweek was extended to all employees, along with a pay raise. Ford argued that his employees were more productive in fewer hours; critics were skeptical they could be productive enough to make up the difference.

Then came the stock market crash, the Great Depression and record-high unemployment. After an underwhelming response from President Herbert Hoover, he faced New York Gov. Franklin Roosevelt in the 1932 election. Shorter work hours was a major issue among voters, and both candidates had ideas, according to historian Benjamin Hunnicutt in his book “Work Without End: Abandoning Shorter Hours for the ‘Right to Work.’”

Roosevelt, a Democrat, pushed federal legislation to establish shorter work hours — something he had already done at the state level in New York — while Hoover backed voluntary share-the-work drives. The idea was that if workers had shorter hours, no one would be unemployed, even if everyone ended up making less money, though unions were also pushing for a decent federal minimum wage.

After Roosevelt won the election but before he took office, Sen. Hugo Black, D-Ala., introduced a bill backed by the American Federation of Labor to temporarily shorten the workweek drastically, to only 30 hours — six hours a day, five days a week. For a while, it had Roosevelt’s support, and he began negotiating with business leaders behind closed doors; if they would shorten the workweek to 30 hours voluntarily, then he would go easy on antitrust reforms, he said, according to Hunnicutt.

As soon as Roosevelt took office on March 4, 1933, he called Congress into a special session — what would become its most productive streak in history. Over the next 100 days, Roosevelt and his Cabinet guided more than a dozen major bills through the House and Senate, stabilizing the banking system, regulating Wall Street, subsidizing farmers and getting relief checks into the hands of the unemployed.

Amid this flurry, on April 6, the Senate passed Black’s 30-hour week bill 53-30 in a bipartisan vote. Supporters claimed it would create 6 million jobs, The Washington Post reported. It was expected to pass the House, and Secretary of Labor Frances Perkins was publicly supportive.

Business leader were up in arms. “Instead of looking at the increase in leisure as inevitable or as potentially beneficial,” Hunnicutt wrote, they feared that if workers got a taste of a 30-hour week, they would never want to go back, and the law would become permanent. Men of industry held emergency meetings in Chicago and Philadelphia, and Perkins, who also supported a federal minimum wage, was flooded with messages of opposition.

Meanwhile at the White House, as Roosevelt worked on a comprehensive recovery plan, he began to turn against the 30-hour week. What if, rather than sharing available work, there was just more work? As the plan for a massive public-works program took shape, support for the 30-hour week collapsed. Instead, Roosevelt used the threat of it as leverage to get industry leaders to agree to ban child labor, set a modest minimum wage and limit the standard workweek at 40 hours, Hunnicutt wrote.

The resulting National Industrial Recovery Act was a triumph, but one that didn’t last. Two years later, in May 1935, the Supreme Court declared it unconstitutional in a decision that so angered Roosevelt he threatened to expand the court.

In 1938, the minimum wage, 40-hour week and child labor ban returned in the form of the Fair Labor Standards Act. This time, Perkins asked Department of Labor lawyers to draft a law that had a better chance of passing judicial scrutiny. And they had another ace in their sleeve — a few months earlier, Roosevelt had nominated his first justice for the Supreme Court. He chose Hugo Black.

For decades, the 40-hour week has endured, but it didn’t seem like it would in the beginning. As Joe Pinsker of the Atlantic pointed out in June, many economists once assumed we would be working fewer than 40 hours by now. In 1956, even then-Vice President Richard Nixon predicted a 32-hours, four-day workweek in the “not too distant future.”