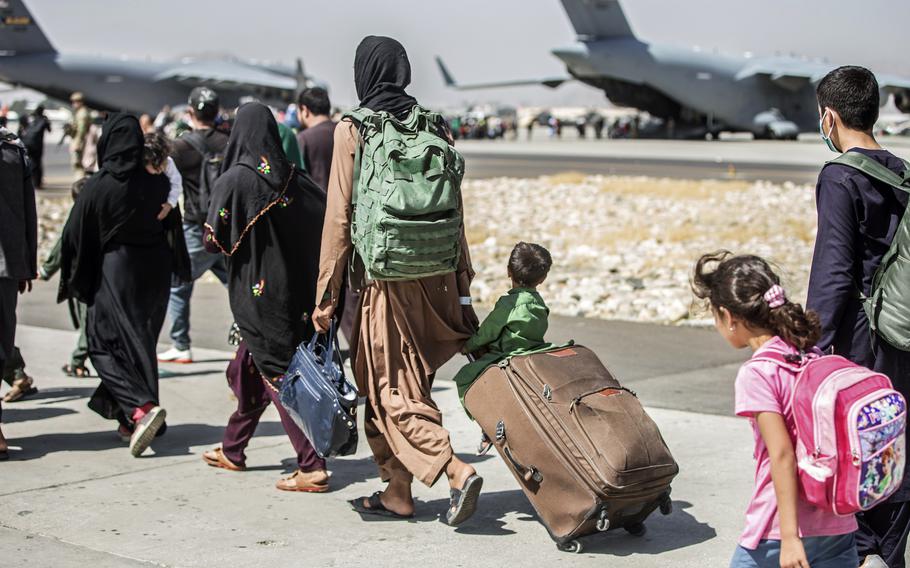 These are just some of the ways Chicago resettlement agencies are working to welcome an expected influx of Afghan refugees who fled their homes before the last U.S. plane left the country.

Refugee resettlement groups expect as many as 500 Afghan refugees to arrive in the coming months. Illinois legislators have suggested Chicago should receive many, as the city has both the capacity to serve them and the Afghan communities to welcome them. Illinois Rep. Jan Schakowsky called supporting refugees a “moral obligation.”

Groups that help resettle refugees, like RefugeeOne, Heartland Alliance, Catholic Charities and World Relief, were already preparing for Afghan arrivals as the U.S. prepared to exit the country. The extra evacuees are an unexpected and urgent addition.

“It is like with the expression building the plane as you’re flying it,” said Lea Tienou-Gustafson, director of Refugee and Immigrant Community Services at Heartland Alliance. “That’s very much what it feels like right now. Information is just changing literally hourly.”

In recent days, staffers also frantically worked to help those still in Afghanistan, calling legislators and the State Department to help Illinois residents or family members get to the Kabul airport and safely out of the country. Chicago volunteers from RefugeeOne also traveled to a Virginia military base to help process arriving refugees. Schakowsky said she helped submit 100 cases to try and get people out of Afghanistan and to Illinois, and as of Monday knew of only two families who had left.

Staffers described working to prepare apartments and find household items for people who left everything behind.

“People will have left with very little,” said Tienou-Gustafson. “We know that people will need everything from clothing, to children will need school supplies, families will need furniture and home goods.”

An additional financial hurdle will be that many will be coming on a status that makes them ineligible for benefits like food stamps, and meaning nonprofits hope to raise funds to meet that financial gap. Others will arrive on Special Immigrant Visas, the program for Afghans who worked for the U.S. government or military.

Tienou-Gustafson said they received many offers to volunteer; groups like Heartland and RefugeeOne also are accepting donations as it is hard to assess exact needs until more families arrive. Right now, they sometimes get just 24 hours’ notice that a family will be arriving.

“We anticipate that we will continue to have arrival notices, and those people will arrive quite quickly,” she said.

Ekram Hanna, who herself arrived from Iraq in 2012 on a Special Immigrant Visa, said the mental health needs will be acute. People experienced beatings from the Taliban on the way to the airport and they often had tried multiple times to flee amid violence.

For her, “it’s been really tough” to watch the headlines and know personally how people are at risk. She and her husband left Iraq after receiving a threat.

“These people will arrive with trauma,” she said. “They will need emotional support first.”

Some Afghan families arrived very recently; groups expect people to come over the course of the next few months. Resettlement agencies provide the first three months of rent, but families who often arrive not speaking English and working to learn a new city and help children adjust have needs over a longer span of time.

Tienou-Gustafson expects housing will be an issue; they have heard from people who have apartments available and are offering them for families. They also will need volunteers to help with tasks like grocery shopping, which can free up staffers to help families navigate paperwork for things such as school registration.

Refugees are continually arriving in Chicago; right now families Heartland is preparing for include people from Congo, Syria and Sudan. These organizations provide youth programs, English classes and mental health services. They also work closely with people in the Afghan community, who have helped them know what grocery items may offer comfort or encouraged common home-country items such as rugs.

“The things that we’re all seeing on the television are things that these people have witnessed and lived through,” she said, “and yet there’s still a sense of loss in leaving your home country. There’s a lot that people are going through.”