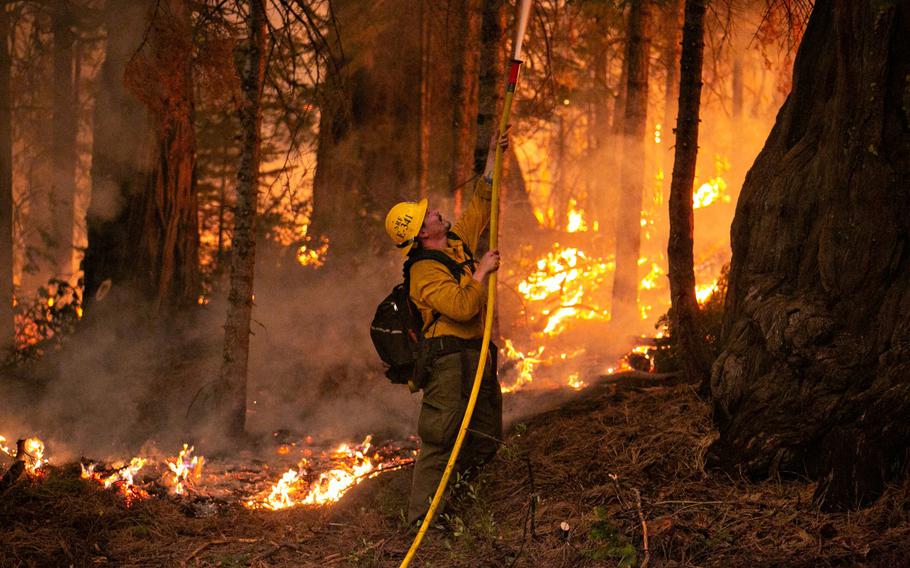 A firefighter works a control burn to head off a spot fire that started on a ridge behind a business on Hwy. 50 on Saturday, Aug. 28, 2021, in Strawberry, Calif. Firefighters continue to tackle the Caldor fire as it creeps closer to South Lake Tahoe. (Jason Armond, Los Angeles Times/TNS)

SOUTH LAKE TAHOE, Calif. (Tribune News Service) — The Caldor fire burning near South Lake Tahoe continued its slow creep east on Sunday, with crews engaged in a “pretty good firefight” as they braced for the arrival of strong winds, according to California Department of Forestry and Fire Protection operations chief Cody Bogan.

Crews were primarily focused on two areas, including the Delta division on the fire’s northwest perimeter, which spurred new evacuation orders around Pleasant Valley Road over the weekend.

But the majority of growth and activity was on the fire’s northeastern edge, near the town of Strawberry and in the direction of the South Lake Tahoe basin, officials said. By Sunday morning, the fire had seared through 156,515 acres and was 19% contained.

Firefighters on Saturday made a substantial stand to protect Strawberry, including the historic Strawberry Lodge. Flames at one point were within feet of the town’s general store, but crews were able to keep them at bay through strategic backfiring and hose line operations.

But the biggest threat to the Tahoe Basin could be yet to come, as the National Weather Service has issued red flag warnings indicating gusty wind conditions in the fire area from 11 a.m. Monday to 11 p.m. Tuesday.

“We are expecting a big change in the weather pattern,” incident meteorologist Jim Dudley said during a briefing Saturday evening. “What will happen is that the winds that have been affecting the fire on the ground level ... are going to be aided by southwesterly winds aloft. “

Officials said the winds will meet with hot, dry conditions to create elevated fire weather concerns. Gusts on Monday could be as strong as 35 mph.

Crews on Sunday will be working hard and fast to get ahead of the shift.

“We have one more day of fairly light winds across the fire, and then things change later Sunday night, Monday, and they will continue into Tuesday,” Dudley said.

Adding to the challenges is the area’s topography, which includes deep drainages and canyons that can act as funnels for the wind and flames, officials said.

Volmer said the fire is currently spotting at distances as far as three-fourths of a mile, and the probability of those spots creating new fires is 90%. In the days to come, that probability will increase to 95%.

Winds have long been the “X” factor in the state’s extreme fire behavior, officials said, so the forecast for the week could spell trouble for crews and for residents waiting for answers.

“We’ve had spotting occurring with these weaker winds,” said Cal Fire public information officer Henry Herrera. “So once they reach those [higher] speeds, there is potential for increased spotting, and for the spotting distance to increase as well.”

Residents in many areas near the fire are watching with concern and wondering whether and when it is time to take action.

In the Christmas Valley — the first part of the Tahoe basin to be placed under a voluntary evacuation notice — resident Carol Bin, 61, moved her horses to nearby Gardnerville, Nev., last week. She said she was hunkering down with air purifiers to protect against the fire’s thick yellow-gray smoke while she waited to see what the blaze would do next.

A former Big Bear resident, Bin said she has faced evacuations before. She wasn’t eager to do it again.

“The hardest part is to pack,” she said. “Do I pack for a week? Or do I pack like I’m never coming back?”