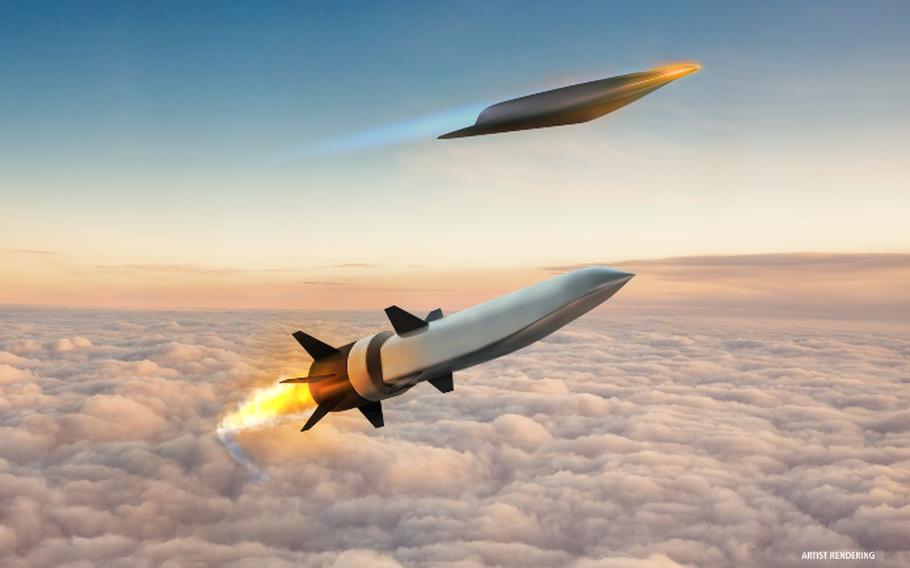 TUCSON, Ariz. (Tribune News Service) — The University of Arizona has upped its game in hypersonic flight research to help meet the needs of the U.S. military and companies including Tucson-based Raytheon Missiles & Defense, as they race to develop super-fast hypersonic missiles and aircraft.

The school’s latest upgrades to its wind-tunnel facilities could make the UA a center of research and education in hypersonics, the science of flight at speeds of Mach 5 — five times the speed of sound — and faster.

Research on hypersonics is in hyperdrive as the U.S. rushes to keep up with testing by China and Russia, which have already flight-tested hypersonic missiles, and commercial aircraft makers including Boeing have floated concepts for new supersonic and hypersonic passenger aircraft.

But flying at hypersonic speeds creates a number of difficult technical problems, including super-heating of surfaces from air friction, air-flow design, airframe stress and high-speed maneuverability.

The UA aims to be in the middle of solving those problems, after spending about $1.7 million on wind-tunnel upgrades in the past two years, supported by grants totaling more than $3 million last year from the research arms of the Army, Navy and Air Force, as well as from Raytheon.

Though a few other major research universities have bigger and faster wind tunnels, the UA’s latest upgrades will allow experimentation across the air-speed spectrum, from subsonic to hypersonic, said Jesse Little, a UA associate professor of aerospace and mechanical engineering and head of the UA’s Turbulence and Flow Control Laboratory.

Little said hypersonics research is a key part of the university’s strategic plan, and recent additions and upgrades have vaulted the UA into the forefront of the field.

“You can probably count on one hand the universities that can compete with us in terms of facilities like this, we’re one of a select few,” Little said, citing research leaders Texas A&M, Purdue, Notre Dame and Cal Tech.

The UA is now finalizing major, grant-funded upgrades to two of its wind tunnels: the installation of the transonic test section in the supersonic tunnel in Little’s lab, and the installation of a so-called “quiet” nozzle in the UA’s Boundary-Layer Stability and Transition Laboratory.

The work is funded largely by Army and Navy grants under the Department of Defense’s Historically Black Colleges and Universities/Minority-Serving Institutions Science Program.

In 2019, Little won a $600,000 grant from the Army Research Office to add the transonic section to the Arizona Supersonic Wind Tunnel, which was acquired by the UA from the defense contractor formerly known as Orbital-ATK in 2018 and recently installed in the UA’s Aeronautical and Mechanical Engineering Building.

The tunnel features large high-pressure tanks that feed air into a linear tube into a test section, where it passes over a subject model and rushes out of the building via a recently constructed, concrete exhaust chimney installed to muffle the sound of rushing air.

The tunnel is wired to collect data and imagery including high-speed and thermal photography.

The supersonic tunnel can test at speeds ranging from Mach 1.75 to Mach 4 over a duration of 10-15 seconds, Little said.

The transonic range, from about Mach 0.8 to 1.3, is complicated because it contains a mixture of subsonic and supersonic behavior that makes testing difficult.

When installation is finished later this year, the supersonic wind tunnel will be the largest facility of its type at a U.S. university, with a 15-inch by 15-inch test section, Little said, adding that the larger size makes it more useful for both testing and basic research.

“This will allow us to to study basic research problems at a larger scale, becuase there’s only so much you can do at small-scale facilities,” he said.

Little and his colleagues are now working on plans to add hypersonic capabilities to the supersonic wind tunnel — making it the biggest tunnel of its kind capable of testing across all the speed ranges.

“This is the largest of its kind and when all is said and done, this will be polysonic — subsonic, transonic, supersonic and hypersonic,” he said.

Meanwhile, UA assistant professor Stuart “Alex” Craig is using a $450,000 grant from the Office of Naval Research to install a so-called “quiet” nozzle on the Mach 5 hypersonic wind tunnel in his boundary-layer lab.

The UA’s Mach 5 wind tunnel is a Ludwieg Tube design, which uses a setup of pressurized air that is released suddenly into a massive vacuum tank as a pair of thin metallic film diaphragms break, sending a soundwave that creates a Mach-5 flow over the test subject.

There are only a few other tunnels in the world with the quiet capability, but they all operate at higher Mach numbers — 6, 8 and 10, he said.

Craig says that after the new nozzle is installed, the tunnel will be the only tunnel in the nation that can produce quiet flow at Mach 5 — filling a gap for the study of cruise missiles and other objects that fly at that speed.

Craig’s UA lab also has a Mach 4 Quiet Ludwieg Tube wind tunnel it acquired from another school a couple of years ago.

“There’s a whole class of vehicles that are completely underserved if you exclusively focus on Mach 8 or higher,” Craig said, adding that much of his research is also transferable to higher Mach speeds.

“To me, having an asset like this, where it’s another opportunity to test locally so you can do it quickly, having this in our backyard is a great opportunity,” Otto said. “Having a facility like this will help you validate your design, you can go back and update your models so you can do more digitally, which helps you go faster from a design perspective.”

But beyond the research connection, the UA’s wind-tunnel facilities will help educate a new generation of future aerospace engineers, said Otto, who earned an MBA from the UA’s Eller College of Management in 2001.

“It’s a tremendous learning opportunity for them — they get more hands-on experience working on something more real and applied in a wind-tunnel setting, and with the need for these hypersonic systems they’ll be able to do it in area that is very relevant,” he said.

The largest of the grants — $1.5 million competitively awarded by the Air Force Office of Scientific Research in collaboration with the German Aerospace Center — will allow researchers to use the UA’s Mach 5 wind tunnel to conduct experiments on the effects of hypersonic flight on reusable rocket stages as they re-enter the Earth’s atmosphere.

Little is the principal investigator on the grant, with fellow department faculty members Craig, Hermann Fasel and Anatoli Tumin. The Air Force picked the UA team as the sole U.S. collaborators after holding a national competition.

Last November, the UA College of Engineering and Department of Materials Science and Engineering was chosen for a key role in a $100 million award from the Defense Department to establish a national University Consortium for Applied Hypersonics. The UA is among 11 schools leading the consortium of 60-plus universities, which is headed by Texas A&M.

Craig, who worked with Texas A&M’s wind tunnels while earning his doctorate there in 2015, said the UA’s wind-tunnel buildout will place it firmly among the top schools for aerodynamic research but there’s still much work to be done.

“They’re generally much more established than we are, so in some sense we are playing catch-up still, but we’re pretty happy with where we’re going,” he said.