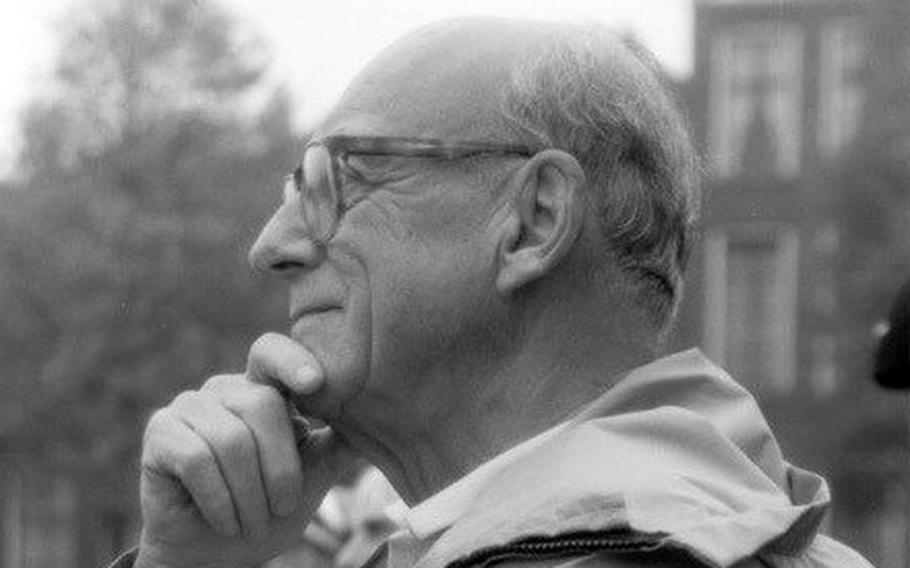 George Vest, a long-serving U.S. diplomat who helped lay the groundwork for the Helsinki Accords with the Soviet Union in the 1970s and later was the State Department’s chief of recruiting and training, died Aug. 24 at his home in Bethesda, Md. He was 102. (Vest family)

George Vest, a long-serving U.S. diplomat who helped lay the groundwork for the Helsinki Accords with the Soviet Union in the 1970s and later was the State Department’s chief of recruiting and training, died Aug. 24 at his home in Bethesda, Md. He was 102.

A family spokesman, Alexander Platt, said the cause was circulatory ailments.

Vest was a World War II combat veteran who developed an interest in international relations while serving in Italy. He joined the Foreign Service in 1947, when retired Army Gen. George C. Marshall, the architect of the Marshall Plan that spurred postwar recovery in Europe, was secretary of state.

After an early posting to Ecuador, Vest thought he would become a specialist in Latin American affairs. But an unexpected assignment to Paris in 1959 as a political adviser to U.S. Air Force Gen. Lauris Norstad, then the supreme allied commander in Europe, led Vest to focus on Cold War diplomacy.

“I had the chance to be the consul in Florence,” he told the St. Petersburg (Fla.) Times in 1988, “which would have meant an apartment, a car, a chauffeur, the wonderful life in Italy, and I turned it down to be the No. 2 to the political adviser to Gen. Norstad, which was a very lowdown job. But it was a chance to learn about all that was going on and being built in terms of NATO and our cooperation with the European countries.

“That really was the driving point for the rest of my career.”

Vest went on to have several assignments with the North Atlantic Treaty Organization, including a two-year term in the early 1960s as the first American to be the top adviser to the NATO secretary general, who was then Dirk Stikker of the Netherlands. After a stint in the United States to study at the Naval War College and serve as a State Department liaison to the Defense Department, Vest moved to Brussels in 1967 as one of the top U.S. diplomats to the European Commission.

Two years later, he became the acting head of the U.S. mission at NATO’s Brussels headquarters. In 1973, Vest was chosen as lead negotiator in preparatory talks for the Conference on Security and Cooperation in Europe (CSCE) in Helsinki.

“This was the first time after World War II where all the Eastern European countries, all of the Western European countries, together with Canada and the United States, sat down to talk about security and cooperation,” Vest told the St. Petersburg Times (now the Tampa Bay Times). “I had very, very few instructions. I was left pretty much to feel my own way.”

The talks with representatives from the Soviet Union and more than 30 other countries sometimes tried Vest’s patience. After a blustery, table-pounding speech by a Soviet diplomat was followed by similar displays from others from the Eastern bloc, Vest rose to speak.

He had used his spare time in Helsinki to read classical poetry, he recalled in a 1990 oral history with the Association for Diplomatic Studies and Training, “and I discover in the Latin poet Juvenal the following statement, which seems to be so pertinent: ‘To hear the same thing said over and over calls for bowels of iron.’ “

He then told the assembled diplomats, “We all now have bowels of iron.”

The lead Soviet negotiator burst out laughing, and it wasn’t long before a nonbinding agreement was reached, calling for a greater emphasis on human rights and cooperation between Western powers and the Soviet bloc.

“As a diplomat by profession, I am very cautious about the use of force,” Vest said in 1988. “Force should be normally the last resort, and diplomacy the first line of attack. I think that often force doesn’t get you anywhere.”

Vest briefly served as State Department media spokesman under Secretary of State Henry Kissinger, then became Kissinger’s top adviser on political and military affairs. In 1977, Vest was nominated as ambassador to Pakistan, only to have the nomination withdrawn a day before his Senate confirmation hearings. Instead, he was tapped to be assistant secretary of state for European affairs. He served as U.S. ambassador to the European Union from 1981 to 1985.

“He was a remarkably successful diplomat,” Charles W. “Chas” Freeman Jr., a former U.S. ambassador to Saudi Arabia, said of Vest in an interview. “He was unfailingly gracious, humorous and quite charming. He was a great listener, which is of tremendous importance in diplomacy.”

George Southall Vest III was born Dec. 25, 1918, in Columbia, Va. His father was an Episcopal minister in small towns in Virginia and settled in Alexandria.

Vest was a graduate of Alexandria’s Episcopal High School, then received a bachelor’s degree from the University of Virginia in 1941. He spent four years as an Army officer during World War II, primarily as a forward artillery observer in Italy, but seldom spoke about his wartime experiences.

After the war, he used the G.I. Bill for graduate studies at U-Va., receiving a master’s degree in history in 1947.

His wife of 68 years, the former Emily Clemons, died in 2015. Their daughter, Jennie Vest, died in 2014. Survivors include two sons, George Vest IV of Fairfax, Va., and Henry Vest of Broomfield, Colo.; and two granddaughters.

Vest’s final assignment at the State Department was as director general of the Foreign Service, in charge of recruiting, hiring, training - and disciplining - the country’s diplomats.

“I get every month something called the ‘sin report’ for the Foreign Service,” he told the Los Angeles Times in 1989. “I dole out the punishment. I had no idea of the endless variety of sin until I took this job.”

During his four years as director general, Vest ate lunch most days in the State Department’s cafeteria, where workers often approached him to discuss their careers and personal problems. He retired in 1989 as a “career ambassador,” a rank requiring a presidential nomination and Senate confirmation.

Vest said he had “absolutely not a penny to my name” when he applied for the Foreign Service, which before World War II had been dominated by wealthy graduates of Ivy League schools. His first assignment was to Bermuda.

At the time, members of the diplomatic corps - practically all men - were expected to own a cutaway tailcoat and striped trousers for formal receptions.