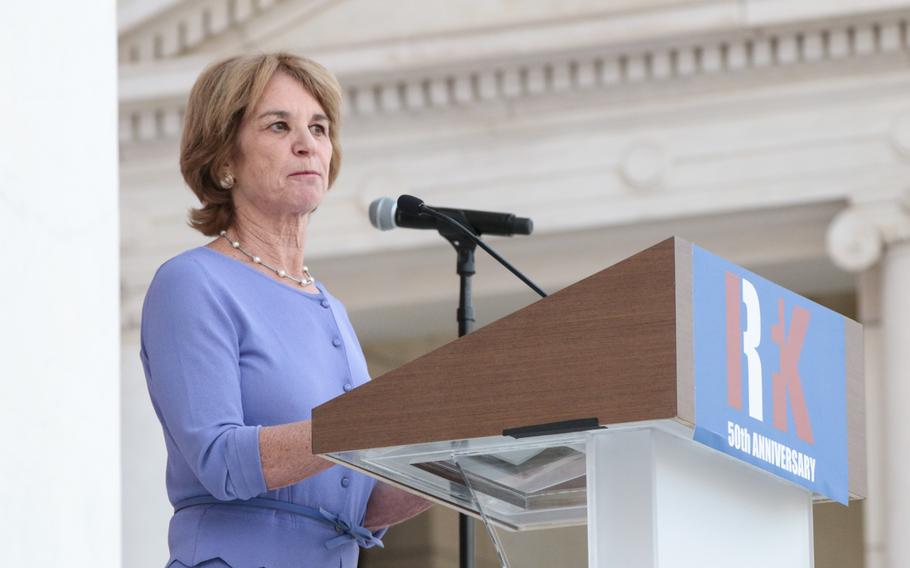 Kathleen Kennedy Townsend, daughter of Robert F. Kennedy, speaks Wednesday, June 6, 2018, at Arlington National Cemetery during a ceremony honoring her father on the 50th anniversary of his death. (Michael S. Darnell/Stars and Stripes )

Sirhan B. Sirhan, convicted of the 1968 assassination of Sen. Robert F. Kennedy, will face a California parole board for the 16th time Friday in a prison outside San Diego. But unlike the first 15 times, no prosecutor will stand to oppose the release of Sirhan, who is now 77.

Sirhan was arrested at the scene of Kennedy's fatal shooting in Los Angeles on June 5, 1968, convicted of first-degree murder and sentenced to death for the slaying of a U.S. senator who appeared headed for the Democratic nomination for president. Coming just two months after the killing of the Rev. Martin Luther King Jr., the two assassinations created a turning point in American history with the sudden elimination of the charismatic leaders of the American civil rights movement and the Democratic Party.

When California eliminated the death penalty, Sirhan's sentence was reduced to life with the possibility of parole. And now Sirhan, incarcerated for 53 years, may benefit from a new push among progressive prosecutors to seek the release, or not oppose the release, of convicts who have served decades behind bars, no longer pose a threat to society, and will be costly to treat medically in their later years.

Newly elected Los Angeles County District Attorney George Gascón told The Washington Post shortly before his inauguration in December that he was launching a sentencing review unit to revisit the cases of about 20,000 prisoners for possible resentencing, analyzing both the fairness of long sentences and the cost savings for releasing low-risk or older inmates. Gascón also issued a directive that his office's "default policy" would be to not attend parole hearings and to submit letters supporting the release of some inmates who had served their mandatory minimums, while also providing assistance to victims and victim advocates at parole hearings if requested.

In Sirhan's case, Gascón's office is remaining neutral. The office said it would not attend the parole hearing, as Los Angeles prosecutors have done historically, but it also would not send a letter in support of Sirhan's parole.

"The role of a prosecutor and their access to information ends at sentencing," said Alex Bastian, special adviser to Gascón. "The parole board's sole purpose is to objectively determine whether someone is suitable for release. If someone is the same person that committed an atrocious crime, that person will correctly not be found suitable for release. However, if someone is no longer a threat to public safety after having served more than 50 years in prison, then the parole board may recommend release based on an objective determination."

Kennedy is survived by his wife, Ethel Kennedy, and nine children, many of whom declined to comment. The family has not submitted any letters taking a position on Sirhan's parole and have not requested to speak at Friday's hearing.

In 2018, Robert F. Kennedy Jr. told The Post that he believed that Sirhan was innocent of the killing of his father, and had met with Sirhan in prison to tell him so. Kennedy said this week that he supported Sirhan's parole application and that he still believed a second gunman committed the assassination, but that he would not participate in the parole process and declined to comment further. Robert Kennedy Jr.'s stance against vaccines, most recently the coronavirus vaccine, has drawn controversy.

Former Maryland lieutenant governor Kathleen Kennedy Townsend said in 2018 that she supported her brother's call for a reinvestigation of the slaying of her father. She declined to comment before the parole hearing, as did human rights activist Kerry Kennedy and former congressman Joseph P. Kennedy II.

After Gascon's announcement that his office would not appear at parole hearings, Los Angeles County Sheriff Alex Villanueva announced that members of his department would attend the hearings, "in support of those who have been victimized by violent crime." But Villanueva's office declined to comment on whether they would appear in the Sirhan case, and they did not file a request to be present.

Sirhan has a new parole lawyer for this hearing, who does not raise any claims about Sirhan's involvement in the shooting, in which five other people standing behind Kennedy in the pantry of the Ambassador Hotel were wounded. Instead, lawyer Angela Berry focuses on Sirhan's age at the time of the murder - 24 - his clean record in prison, his remorse and his unlikely chance of reoffending if released.

Berry does not mention Kennedy in her prehearing brief, other than to argue that "denying parole on an opinion that Mr. Sirhan's actions 'changed the course of history' or 'disenfranchised millions of Americans' violates due process." She cites the California Supreme Court's guidance on parole consideration, which said that an analysis "cannot be undertaken simply by examining the circumstances of the crime in isolation, without consideration of the passage of time or the attendant changes in the inmate's psychological or mental attitude."

"Current dangerousness is the relevant inquiry by the Board," Berry argues. "Statutory and case law dictate that parole shall be granted unless the prisoner poses a current danger to public safety." Under California law in effect in 1968, a life sentence with parole would have given Sirhan eligibility for release after seven years. He has had no disciplinary violations since 1972, and though he claims not to remember the act of shooting Kennedy, he has expressed remorse in parole hearings since the 1980s and said at one, "I have feelings of shame and inward guilt ... I honestly feel the pain that they [the Kennedys] may have gone through."

Munir Sirhan, Sirhan's younger brother, continues to live in the family's home in Pasadena, Calif., where they grew up after emigrating as children from Israel, as Palestinian refugees, with their parents. "His home is ready for him," Munir Sirhan told The Post, and his neighbors have filed letters in support of Sirhan's return. "We're awaiting the deserved, proper decision from the parole board."

Berry's pleadings raise the possibility that Sirhan could be deported if paroled, since he did not obtain citizenship before his arrest. "He has said he would give up his right to live in this country," Munir Sirhan said, "and go back to the Arab world. There are a number of countries who have said they would accept him."

In California, two parole commissioners conduct the hearing, corrections department spokesman Luis Patino said. The two-person panel typically issues its decision and explains its rationale on the day of the hearing. Following that, parole board staff have 90 days to review the case, followed by a 30-day period in which the governor can uphold, reverse or modify the decision, take no action, or send the decision to the full 17-person parole board, Patino said.

Looming over all of this are Sirhan's supporters who say he did not shoot Kennedy, and who have raised that issue in vain both in the California courts and in parole hearings. The most prominent of those supporters is Paul Schrade, now 96, who was also shot while walking behind Kennedy, and appeared at Sirhan's last parole hearing to advocate for his release.

Shortly after midnight on June 5, 1968, Kennedy was declared the winner of the Democratic presidential primary in California. He gave a short victory speech in a packed ballroom, with Schrade standing next to him, then walked through the hotel pantry toward a news conference. But witnesses said Sirhan moved forward at Kennedy and began firing a .22-caliber gun, striking him and five others. One shot entered Kennedy's brain, and he died a day later. Sirhan was tackled immediately and arrested. A jury convicted him in 1969, and all appeals were rejected.

But Kennedy was shot four times at point-blank range from behind, one shot passing through his jacket and not striking him, with the fatal shot fired so close there was gunpowder on Kennedy's hair, the coroner Thomas Noguchi found. Multiple bullet holes in the ceiling and door frames indicated more than eight shots, the capacity of Sirhan's gun, were fired. Prosecutors and some experts have said that Kennedy probably turned his back on the advancing gunman, enabling the wounds to the rear, that the extra bullet holes weren't really bullet holes, and that Sirhan is lying when he claims not to remember the shooting.

Schrade said he and the other people behind Kennedy were shot by Sirhan, but that a second gunman killed Kennedy from behind. He said the lead crime scene investigator lied when he testified that he test fired Sirhan's gun and the bullets matched those taken from Kennedy and two other victims: subsequent investigation showed the test bullets did not match the victim bullets. Prosecutors claimed the mismatch came from a clerical error, though the crime scene investigator was later found to have bungled other major cases.

"He's not the guilty one," Schrade said of Sirhan. "The important thing is to get him out, and then identify the second gunman, who's never been identified by the LAPD." The Los Angeles police have declined to comment on the case in recent years. As a victim, Schrade is entitled to speak at Sirhan's hearing, but instead is sending Denise Bohdan, a lawyer and filmmaker whose father, journalist Fernando Faura, pursued the Kennedy assassination story for decades.

For many years, Sirhan's post-conviction lawyer was William Pepper, who proclaimed Sirhan's innocence and lost three parole hearings for him. Now 84, he stepped aside for Berry but is pessimistic of Sirhan's chances when sized up against his role in history.

This time "could be" different, Pepper said. "It's unlikely, but it could be," he said. "They have enacted this new policy of letting elderly prisoners go and cutting back the costs." Coronavirus considerations have enabled more releases as well, corrections officials said.

"He never had a fair trial," Pepper said. Sirhan's lead attorney was under indictment by the same prosecutors who were trying Sirhan, ignored the autopsy evidence of the rear gunshot wounds and tried to quickly plead Sirhan guilty. "The parole board doesn't like to hear that, they're not there to adjudicate a prior hearing. They want to know, 'Do you admit you did it, are you sorry you did it, and will you live an exemplary life?' I think he can satisfy the basic requirements, but I don't think it'll make a bit of difference."