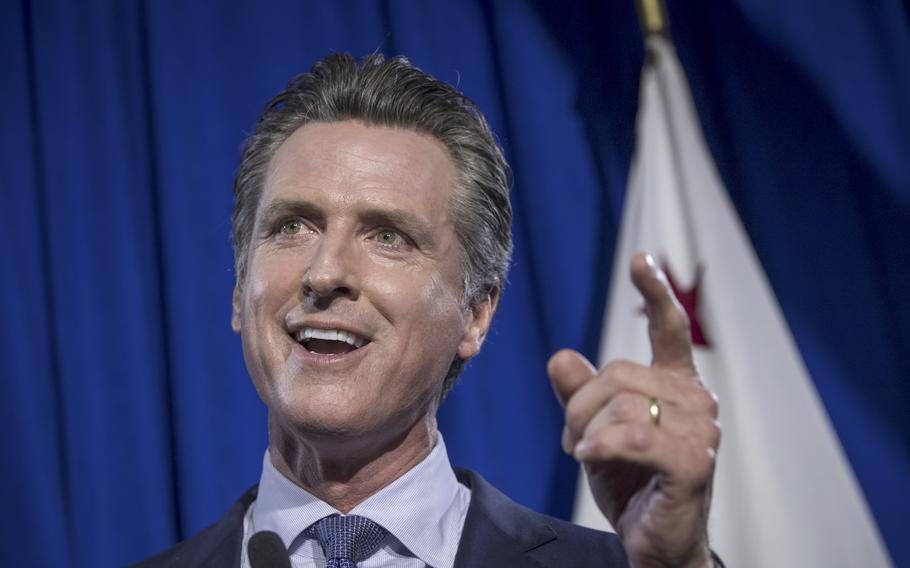 Gov. Gavin Newsom, in the third year of his first term, fears that might happen to him, unless he can persuade Democratic voters to believe the threat of a recall is real. "Democrats up and down the state haven't taken this seriously, whereas Republicans have," he said. "Republicans see this as a historic opportunity."

Newsom was sitting in the library of the Carl B. Munck Elementary School in Oakland. Minutes before, he had announced that California would become the first state in the nation to require teachers and school staffs to be vaccinated against the coronavirus or submit to weekly testing, the latest in a series of executive actions designed to slow the spread of the delta variant.

The variant's spread has put people on edge, even in a state where vaccination rates are relatively high. After a summer of hope, there are now fears of a setback in the battle against covid-19 that could produce new restrictions. Newsom acknowledged the potential impact on the recall election. "Anytime people are fearful and anxious, I mean, those aren't the ideal conditions," he said.

California remains an overwhelmingly Democratic state. Newsom won his election in 2018 with 62% of the vote. In 2020, President Biden defeated former president Donald Trump here with 64% of the vote. Unlike 2003, when then-Democratic Gov. Gray Davis had dismal approval ratings, Newsom's number is just above 50%. All things being equal, he should easily fend off the recall challenger.

But there is an asymmetry to the recall election, so far. Republicans are paying far more attention than are Democrats, and they appear to be much more motivated to vote. A series of polls now show that, among likely voters, support for recalling Newsom is nearly as high as opposition.

The recall movement started slowly and seemingly without much organization. Given extra time to collect signatures because of the pandemic, the supporters were able to qualify it for the ballot. Even then, many Democrats paid scant attention to it. Newsom said he was not among them, saying he has been monitoring the recall effort "every day" for months.

"It's not like it consumed me throughout the day," he said. "But I have kept an eye on this because I watch Fox News. I watch One America News. I watch Newsmax. I read Drudge and Breitbart. I have friends on the far right. I have family members on the far right. And I knew how seriously they were taking it when [former Republican House speaker Newt] Gingrich and [former Arkansas governor Mike] Huckabee started talking about this. . . . That's when I knew I needed to pay more attention."

In the interview, the governor offered a strong defense of his record, ticking through statistics that he said portray California in a strong position, whether in new jobs produced, venture capital raised or new IPOs. He cited his aggressive policies on climate and energy, and also pointed to a budget surplus of around $80 billion. He says all that as a way of countering a narrative of California as a state in decline. "There's a lot of good things happening, but there's not a lot of focus on the good things," he said. "There tends to be a drumbeat of negativity."

Perhaps for understandable reasons. California this summer is a state besieged with problems. The land is parched by drought and wildfires rage. Crime is on the increase. Homelessness in some big cities is a scourge. Gasoline and other prices are high. The pandemic is not yet tamed. To Republicans, Newsom is the embodiment of unchecked liberal governance. The recall provides an outlet for voters angry or frustrated with conditions and politicians.

Newsom also carries personal baggage, notably that while he was asking Californians to lock down during the pandemic, he attended a birthday dinner for a friend at The French Laundry, one of California's most celebrated restaurants, where he was photographed socializing without a mask. That projection of privilege rankles many Californians. "I own that," Newsom said. "I took responsibility, and it's been an outsized focus."

The Sept. 14 recall ballot, which is being mailed to every voter in the state, is in two parts. First is the question of whether to recall Newsom. The second question will decide his replacement, if the recall vote passes. There are dozens of names on the ballot, though not a single prominent Democrat. The Republican field includes John Cox, who lost to Newsom in 2018; Kevin Faulconer, the former mayor of San Diego; former congressman Doug Ose; state Assemblyman Kevin Kiley; and former Olympian and reality TV personality Caitlyn Jenner.

But the person now drawing attention is conservative radio talk show host Larry Elder. He opposes abortion rights and the minimum wage. He is a climate-change skeptic and recently told the Los Angeles Times that as governor he would consider declaring an emergency to fire bad teachers and another to suspend the state's environmental quality law. He has said that if elected, he would repeal any mandates for vaccines or mask-wearing.

Newsom sees Elder's emergence as an opportunity to jolt Democrats to pay attention by casting the recall as a choice between a progressive Democrat and a Trump Republican. He also puts Elder in the mold of Republican governors Ron DeSantis of Florida and Greg Abbott of Texas, who have tried to ban mask and vaccine mandates and whose states have become covid-19 hot spots. "Their model is DeSantis and [Abbott] in Texas," Newsom said of his opponents. "This is anathema to who we are and what we think."

The governor sees national implications in the recall. "This would be a remarkable, historic moment for them [the GOP] to not only have the bully pulpit but to organize in a very deliberative way an assault on California values and a repudiation of those values . . . ," he said. "This will have really a very profound impact across the political spectrum, well beyond California."

But while he sees a national impact, Newsom is perplexed by the fact that, while the recall has stirred interest on the right, it has not done so on the left, either in the state or nationally. He notes all the focus on the recent mayoral primary in New York and the attention given to the Democratic Party's nominee, Eric Adams. He mentions the attention and money that poured into Georgia last winter in the two special elections that put the Senate in Democratic hands.

The recall, he said, "has been nationalized in the Republican echo chamber. You don't see the focus and consciousness on all the other networks. . . . No one's been particularly focused on the fifth-largest economy in the world, California."

The governor got a boost Thursday when Biden issued a statement calling on California voters to oppose the recall. Newsom would now like to see the president, Vice President Harris and other national Democrats campaigning for him in California. "We have requests in," he said. "We're looking forward to folks getting out here. It'd be nice to see that support sooner than later. . . . People are voting as we speak."

Newsom is still favored to survive the recall and is using his financial advantage to bombard voters from many directions. But he knows that the outcome likely depends on whether Democrats wake up and vote. "The enthusiasm gap," he said, "is what we have to make up for in the next few weeks."