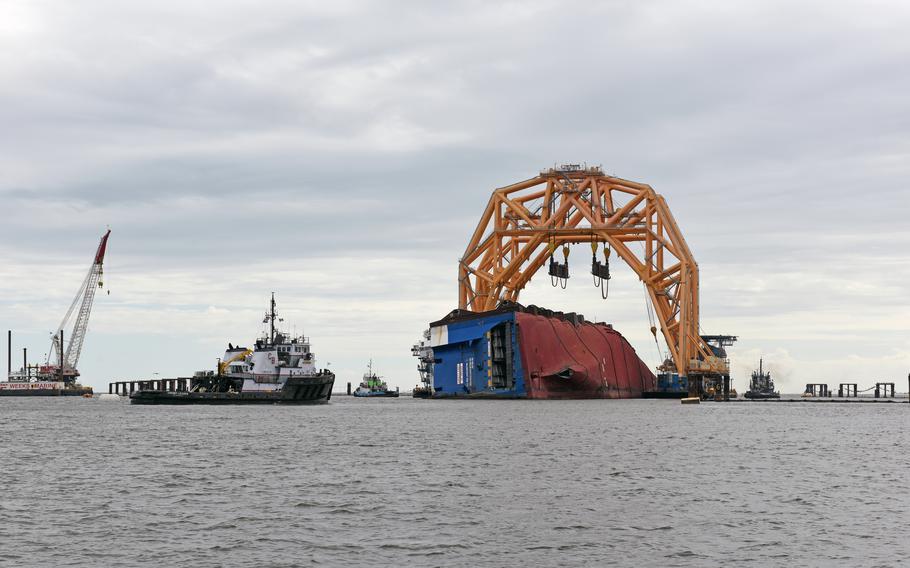 (Tribune News Service) — The environmental advocacy group One Hundred Miles wants the U.S. Navy’s salvage experts to intervene in the final stages of removing the wreckage of the Golden Ray from the St. Simons Sound.

On its website, One Hundred Miles is rallying the public to join it in demanding the Navy Salvage Division provide its “expertise and assistance.”

The petition posted Wednesday comes on the heels of the worst of several oil spills from the shipwreck since cutting on it began in November.

“Over the past few weeks, residents and tourists in the Golden Isles have watched with horror as our ocean, beaches and marshes have been coated with oil,” One Hundred Miles states in the notice on its home page.

Unified Command has and will continue consulting the Navy’s salvage experts on matters involving the Golden Ray operation, the Coast Guard 7th District said in a statement released to The News late Thursday.

“Rear Adm. McPherson has received correspondence from members of the community and is reviewing their concerns and recommendations,” the statement said. “He shares the community’s concern for the St. Simons Sound and the environmental and economic impacts from this incident on the region — specifically, the most recent pollution release and recovery operations. The Coast Guard takes its responsibility to protect ... the marine environment very seriously. Throughout the response, the Unified Command has consulted with the U.S. Navy Supervisor of Salvage and Diving (SUPSALV) and the Coast Guard Salvage Engineering Response Team (SERT) to ensure the safety and environmental efficacy of salvage plans and response activities.”

After the VB 10,000 crane vessel completed the cut to separate Section 6 from the shipwreck on July 30, a river of oil gushed into the sound’s swift outgoing tides and washed up on beaches, Johnson Rocks and marshes along St. Simons Island’s south end.

Unified Command, which is overseeing the operation conducted by Texas-based T&T Salvage, deployed dozens of pollution control workers to the island’s shorelines in response.

Oil discharges to a lesser degree continued throughout last week, stymieing efforts to raise the 3,695-metric-ton section and load it onto a barge for removal.

The section remains partially submerged and suspended from the arching girders of the dual-hulled, 255-feet-tall VB 10,000 nearly two weeks after separation was achieved. In the five previous cuts of hulking steel chunks from the shipwreck, salvors lifted each section from the water, placed it on a barge and towed it from the sound in a matter of days after separation.

Salvors say they located and sealed last weekend an oil venting pipe that was the source of the leaks. Salvors have concentrated this week on removing vehicles and sediment from Section 6 to lighten the load before it is lifted and secured to a barge for removal, Unified Command said.

Once Section 6 is towed from the sound, salvors will have one more cut to make and two more sections of the wreckage to remove from the sound — about 153.5 feet of wreckage.

A large oil spill from the wreckage in late May prompted the Glynn County Health Department to post an oil pollution advisory to beachgoers and anglers over the busy Memorial Day weekend. That spill followed a May 14 conflagration that engulfed the shipwreck in flames fueled by hundreds of vehicles inside, which also led to days of burnt plastic automotive parts washing up on shore.

The group’s decision came after speaking with sources who are knowledgeable in the fields of marine salvage and oil spill cleanups, she said. The expansive surrounding estuary is recognized as a vital habitat and nursery for marine life and waterfowl.

“This oil spill is a game-changer,” Desrosiers told The News. “There’s three more sections left and we don’t know how much oil has been removed. We were told at one point all the oil has been removed and now we have this spill. We cannot keep seeing these mistakes. If you know there’s oil remaining on that ship, then do the cleanup right.

“I don’t mean any disrespect to the people out there cleaning up, but we’re the ones who have to stay here and deal with the repercussions.”

Unified Command consists of the Coast Guard, the Georgia Department of Natural Resources and Gallagher Marine Systems. It is responsible for ensuring the salvage operation adheres to the environmental standards established by the federal Oil Pollution Act of 1990.

“The admiral supports the Unified Command and their management of this response,” Himes said. “It’s worth reminding everyone that we’ve maintained the appropriate resources to meet the challenge of filtering and minimizing the impact that any discharge from the wreck can have on the environment.”

It has been nearly two years since the 656-foot-long Golden Ray overturned between the resort islands of Jekyll and St. Simons on Sept. 8, 2019, with a cargo of 4,200 vehicles. Unified Command estimated at the time the vessel held 380,000 gallons of fuel in its tanks. Massive discharges spilled oil into the sound on two occasions in the weeks following the capsizing, washing up on marsh grasses, barrier islands, inland waterways and other crucial fisheries and nesting grounds.

Salvors then pumped some 327,000 gallons of fuel from the shipwreck’s fuel tank in the final months of 2019.

Oil discharges have breached the EPB that was designed to contain it throughout the cutting process. Outside the EPB, a flotilla of cleanup crews has patrolled the water with oil absorbent boom, oil skimming boats and current busters — V-shaped craft that corral and contain oil.

One Hundred Miles said in its petition that the EPB is not built to contain the swift currents of the St. Simons Sound. The group also is concerned that Unified Command no longer has sufficient pollution control workers on hand.

“They didn’t cause this, but you can make it worse if you don’t clean it up the right way,” Desrosiers said. “We don’t want to see it get any worse than it already is.”

Himes concedes that Unified Command and salvagers did not expect to encounter an oil spill of this magnitude at this late stage in the salvage operation. However, he said a sufficient force was mobilized in response, using Unified Command staff and private oil pollution cleanup labor services.

“We scaled up from 25 people to 60 people within 24 hours and to 80 people within 48 hours using our local OSRO (oil spill response organization) work pool,” Himes said. “There has not been a reduction in resources.”

The rapidly changing currents within the sound present “extreme” challenges in containing all leaked oil within the EPB, he said. That is why the system includes pollution cleanup crews on the water beyond the EPB, on shorelines and spotting from aircraft overhead, he said.

“The sound is a dynamic environment to the extreme because of the amount of force the tides exert several times a day,” Himes said. “We knew it was going to be a challenge and that is why we have multiple layers in place. Sometimes, despite the best efforts, an impact from a discharge can get outside of our filters.”