ATLANTIC CITY, N.J. (Tribune News Service) — One of the state’s largest events is back.

After a year’s absence due to the pandemic, the skies over Atlantic City will be roaring once more with the sounds of jet engines as the Atlantic City Airshow, “A Salute To Those Who Serve,” returns Wednesday, Aug. 18.

“It’s incredibly exciting,” said Michael Chait, Greater Atlantic City Chamber president, when asked about having the airshow flying high once again. “It brings hundreds of thousands of people to the area and provides an enormous economic stimulation for the region.”

This year health care workers will be recognized.

More than 100 health care workers from across the state will be welcomed to the chamber’s corporate chalet where they will have one of the best seats on the beach to see and feel the power of the aircrafts overhead.

One special health care worker will receive a baton from the Golden Knights, the United States Army Parachute Team, who will pass it over to that person after their final jump. Chait explained that they give the baton to someone who has done something incredible over the past year.

There has been a tremendous amount of interest in this year’s show, said Chait, as people look toward more outdoor recreation events like airshows.

The Atlantic City event brings between 300,000 and 400,000 spectators who will be looking skyward along the beaches and Boardwalk to watch the aerial acrobatics.

Where to watch the Atlantic City Airshow

The best viewing options are along the free beaches of Atlantic City and on the famous Boardwalk. A prime location if you want your toes in the sand is on the beach around Jim Whelan Boardwalk Hall where most of the action will take place. The Thunderbirds will fly right over you to begin their performance.

“We encourage people to be safe and give each other space,” said Chait.

Ocean-facing hotel rooms, if you can still reserve one, will also provide great views.

If you don’t want to drive into Atlantic City there are plenty of other options. Views can be scored on the Ventnor and Margate beaches and in Brigantine along the Absecon Inlet at the Cove and South Jetty area.

Premium viewing locations are already sold out. Those included One Atlantic at The Playground with air conditioned space and outdoor terrace where you can sign up to get on a waiting list for available tickets, Bally’s Atlantic City Beach Bar and at 23 stories high The VÜE at the Claridge.

If the beach isn’t your thing and you have a boat or know someone who does, then take advantage and watch from the water. There will be a “no boat zone” so be mindful and respect the space.

If you want to catch a glimpse of some of the performers and avoid the crowds then get down to AC a day early and watch the practice session which begins at approximately 11 a.m.

What time does it begin?

The airspace around Atlantic City will close at 11 a.m. The United States Army Parachute Team, the Golden Knights, will kick off the day with a jump at 11:30 a.m and the U. S. Air Force Thunderbirds will end the show with their performance beginning at approximately 2:50 p.m.

Claim your spot early as the beaches and Boardwalk will fill up quickly. 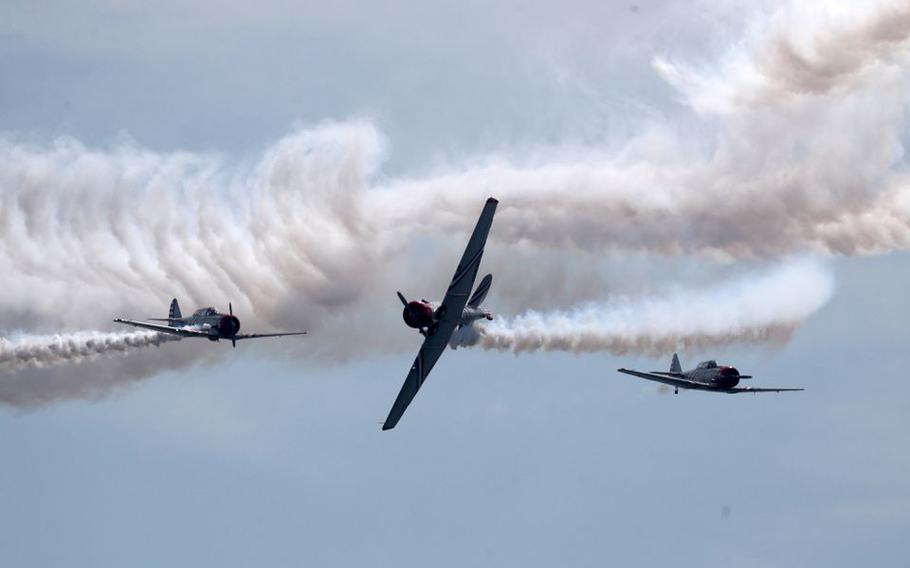 The show will be shorter this year because sponsorships were a challenge, explained Chait, adding that once capacity restrictions were lifted they only had a few months to put the event together.

“If we were able to generate more revenue like we’ve done in years past we would have had other civilian performers,” he said.

“A Salute To Those Who Serve” will feature more than 20 performances. The schedule is subject to change.

Your chance to get vaccinated

You can’t use the excuse that you are unable to receive a COVID-19 vaccine on Wednesday because you are going to the airshow.

Why? Because you can do both now, thanks to the Atlantic County Sheriff’s Office and Rowan Medicine NeuroMusculoskeletal Institute.

Tents will be set up right next to Veterans Row, at the Boardwalk on Florida Avenue, where people can receive the Johnson & Johnson vaccine.

“We’re looking for the volume of people that want to get the vaccine,” said Tim Reed, Chief Warrant officer for Atlantic County. Reed said they are hoping to get approximately 300 shots in the arms of the unvaccinated.

Doctors, nurses and medical students from Rowan will be on site to administer the shots between 11 a.m. and 4 p.m.