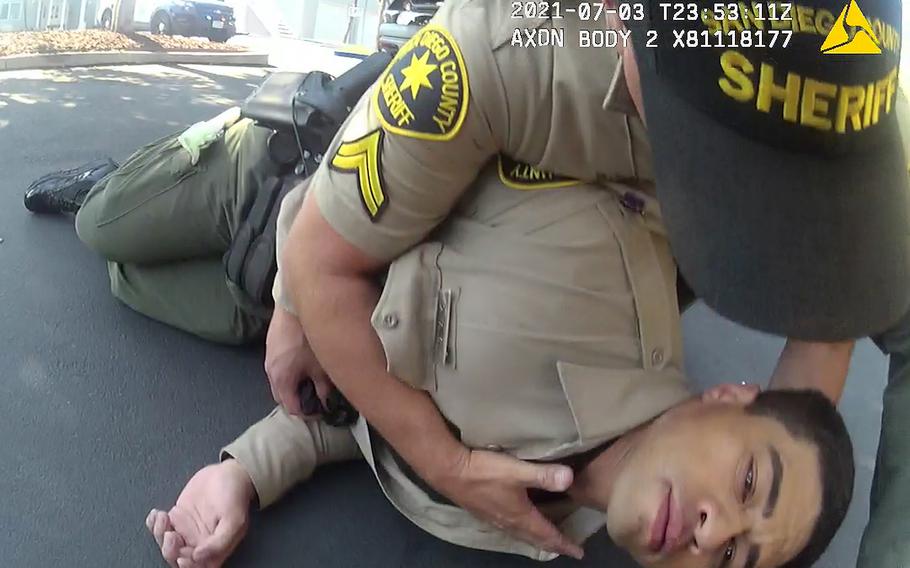 The dramatic video of a San Diego County sheriff's deputy collapsing after processing fentanyl at a crime scene was released to serve as a public service announcement: a warning about the synthetic opioid that was projected to kill more than 700 people in the area by year's end, and about the lifesaving potential of quickly administering naloxone, the overdose-reversal medication.

Instead, the sheriff's department was met with swift backlash, notably from medical experts who said its claim that the deputy nearly died of an overdose caused by touching the drug was scientifically implausible and promoted dangerous misinformation about an epidemic that has intensified during the coronavirus pandemic.

For harm-reduction advocates, many of whom are medical professionals, the video is another instance of law enforcement pushing a false narrative about the risks of incidental fentanyl exposure that is in turn amplified by bad reporting in the news media and wide distribution across social media.

Kassandra Frederique, executive director of the nonprofit Drug Policy Alliance, said the video makes it difficult for people who have the right information when dealing with an adulterated drug supply. At the same time, it "creates the energy" for tougher fentanyl prosecutions and sentences — both of which have done nothing to curb deaths or fentanyl supply, she said — that are reminiscent of the early years of the "war on drugs."

"You create an atmosphere where it's going to force legislatures to create policies in the midst of a hysteria, and we've done this before," Frederique told The Washington Post. "We did it with the crack epidemic."

The San Diego County Sheriff's Department now faces questions over its credibility five days since it released video of the July 3 incident. Sheriff Bill Gore told the San Diego Union-Tribune on Monday that he was "shocked" at the pushback from medical experts, and he denied peddling misinformation.

"We were not trying to deceive anybody, trying to hype the issues," he told the paper.

The department did not respond to The Post's requests for comment Tuesday, including requests to speak to Gore or the field officer who tended to the deputy who was the subject of the video. Gore told the Union-Tribune that the deputy seized up, fell and hit his head after touching a powder that a police report said tested presumptively positive as fentanyl.

"It was classic signs of fentanyl overdose — that's why we called it that," said Gore, who is not a medical expert.

Amid skepticism over the veracity of events depicted in the video, the sheriff's office announced Monday night that it was releasing documents related to the incident and would release the full, unedited footage this week.

Medical experts who study toxicology and addiction medicine were frustrated not only by the sheriff's office but by the initial news reports that uncritically carried the story.

"Despite anecdotal reports from nonmedical sources about overdose from 'exposure' to fentanyl, it is not possible to overdose on fentanyl or fentanyl analogues through accidental skin contact or from proximity alone," Ryan Marino, a medical toxicologist and addiction specialist who teaches at Case Western University School of Medicine, said in a statement released through the Drug Policy Alliance.

Medical experts said a simple fact check could have easily unraveled the narrative.

"This doesn't sound rational and reasonable to me," said Paul Christo, an associate professor at the Johns Hopkins University School of Medicine who studies the opioid crisis.

Fentanyl overdoses occur through pill ingestion, intravenous injection or intranasal inhalation, Christo said. Overdosing through transdermal patches on the skin is "possible but certainly not common," and it would take hours to occur, he said of the prescription treatment that is typically used by cancer patients or people with chronic pain.

The scene described by the sheriff's department is "sort of an over-exaggeration of the misuse of opioids," Christo said. "We already know this is a problem. We already know opioids, especially synthetic fentanyl, is being purchased illegally and leading to overdose deaths."

According to the footage and statements from the sheriff's department, Deputy David Faiivae was processing drugs at a crime scene on July 3 before he collapsed. As Faiivae was opening bags in the trunk of a car, Cpl. Scott Crane, Faiivae's field training officer, warned him not to get too close.

Seconds later, Faiivae backed up, froze and fell to the ground, prompting Crane to quickly administer naloxone (the department made headlines in 2014 for being the first in California to allow all deputies to carry naloxone) and remove Faiivae's body armor so he could breathe easier. Faiivae was later taken to a hospital.

"I was trying to gasp for breath, and I couldn't breathe at all," Faiivae recalled in the department-produced video.

To health experts, it's unclear what prompted Faiivae's reaction. A December 2020 study in the International Journal of Drug Policy said reports of similar incidents began around a 2016 announcement by the Drug Enforcement Administration that "a small amount [of fentanyl] ingested or absorbed through the skin can kill you." The communique showed police from Atlantic County, N.J., describing how they "overdosed" after inhaling airborne fentanyl and had symptoms that the paper's researchers said were consistent with panic attacks, such as disorientation and shortness of breath.

If claims that small amounts of fentanyl could be absorbed through the skin and be deadly, "we'd have I don't know how many people dying," said Christo, the Johns Hopkins professor.

"It's an isolated event, and I think the public should still have confidence in law enforcement," he said of the San Diego incident.

Frederique of the Drug Police Alliance said she is glad to see police being fact-checked. The criticism of the San Diego department is further proof, she added, that medical experts, not law enforcement, should be educating the public about drug risks.

"The fact that the media is relying on law enforcement to do this public education on the overdose crisis actually makes it more dangerous for us," she said. "If we have this hysteria that you can OD from touching fentanyl, it makes everything more difficult."