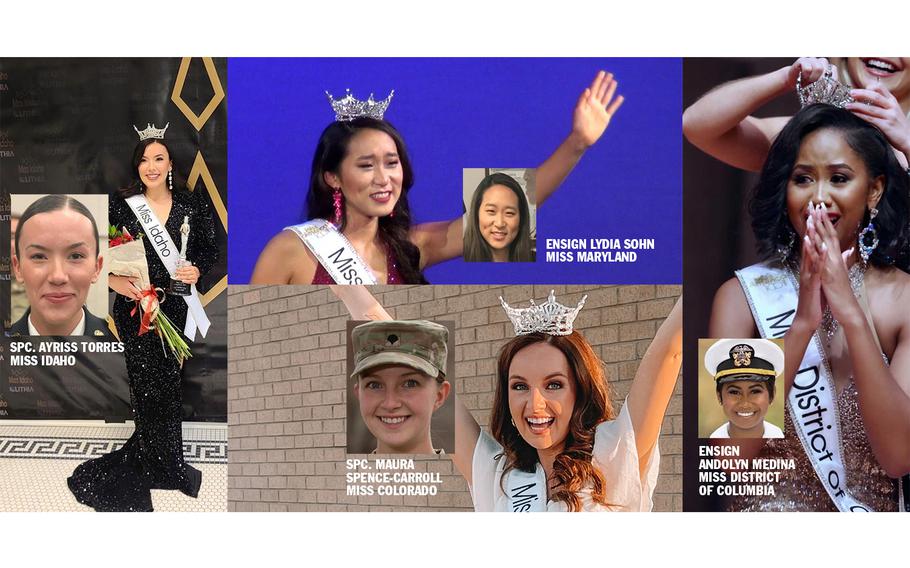 Clockwise from left: Spc. Ayriss Torres, 21, a civil affairs specialist in the Army Reserve, will compete in the Miss America pageant as Miss Idaho. Ensign Lydia Sohn, 25, will compete as Miss Maryland. She is in a Reserve status as she prepares to enter Des Moines University College of Osteopathic Medicine in 2022. Navy Ensign Andolyn Medina, 25, will compete as Miss District of Columbia. She is currently in a Reserve status to attend George Washington University as a full-time doctoral candidate in clinical psychology. Spc. Maura Spence-Carroll, 21, an intelligence analyst in the 4th Infantry Division at Fort Carson, Colo., will compete as Miss Colorado. (Photos provided by: Spc. Ayriss Torres; Ensign Lydia Sohn; Ensign Andolyn Medina; U.S. Army and Spc. Maura Spence-Carroll .)

An active-duty soldier, an Army reservist and two Navy ensigns in the Reserve will trade their name tapes and uniforms for sashes and sequined gowns to compete for the crown of Miss America.

After the dust settled from final state competitions in July, at least four military women earned spots in this year’s Miss America competition, seemingly more service members than have graced the stage at one time in the pageant’s 100-year history.

“There just seems to be this idea that women who embrace their femininity can't do traditionally ‘masculine things.’ The reality is that we can,” said Spc. Maura Spence-Carroll, an intelligence analyst in the 4th Infantry Division at Fort Carson, Colo.

The 21-year-old, and now Miss Colorado, said so many service members competing for Miss America just shows that women are multifaceted.

“I just have different things that I'm interested in. Because they seem like such polar opposites, being in the military and then competing in Miss America, it doesn't mean that I am splitting myself. I'm wholly myself because I am able to enrich my life through different perspectives,” she said.

The other service women crowned in the past two months to compete for Miss America are Spc. Ayriss Torres, 21, a civil affairs specialist in the Army Reserve who will compete as Miss Idaho, Navy Ensign Andolyn Medina, 25, as Miss District of Columbia, who serves in a Reserve status to attend George Washington University as a full-time doctoral candidate in clinical psychology, and Ensign Lydia Sohn, 25, as Miss Maryland, who also is in a Reserve status as she prepares to enter Des Moines University College of Osteopathic Medicine in 2022.

Both Navy women are part of the military’s Health Professions Scholarship Program, which pays for a person’s education in exchange for active-duty service in several health care fields after graduation.

A shared history of service

In 2007, Utah National Guard medic Jill Stevens competed as Miss Utah. Stevens served in Afghanistan, making her the first combat veteran to vie for Miss America. In 2013, Army reservist Theresa Vail made headlines as Miss Kansas for having visible tattoos during the swimsuit portion of the competition.

Patricia Northrup Murray competed in 1992 as Miss California and used the scholarship money that she earned to begin a career in commercial aviation. She then joined the California Air National Guard and retired as a lieutenant colonel with 21 years of service and six tours in the Middle East, according to her website.

The Miss America Organization said they can’t be certain there weren’t other service members or veterans who have participated because they don’t track the information.

Margot Mifflin, an author and journalism professor at the City University of New York, said she didn’t find a definitive list of military women who competed in the pageant while writing her book, “Looking for Miss America: A Pageant’s 100–Year Quest to Define Womanhood.”

However, Mifflin did uncover the military and Miss America have always shared a connection, whether through rallying support for the troops, boosting morale, or sharing similar values. Miss America also inspired the name of a Korean War-era film to encourage women to take jobs in support the war effort.

Each of the service women in this year’s competition made it clear that their Miss America-related affairs are separate from their military duties. However, it was inevitable that the worlds would collide.

Torres, a member of the 405th Civil Affairs Battalion out of Salt Lake City, will miss her Miss America orientation because it coincides with a rotation at the National Training Center at Fort Irwin, Calif. Spence-Carroll, whose talent is singing, said she often has to practice her vocals in her barracks room, where a soldier living nearby once texted to tell her that she sounded like a Disney princess.

The soldier said she’s gotten countless messages from veterans, service members and military family members who have shown their support for her goals.

“It's almost overwhelming to see how many people resonate with what I'm saying and with what I want to do. It's also kind of terrifying, because now it's really set in that I'm a representative of two organizations. I represent Miss America to the Army, and I represent the Army to the rest of the world,” Spence-Carroll said.

The skillset and rewards associated with joining either organization are surprisingly similar, said Shantel Krebs, chairwoman of the board of the Miss America Organization and its interim president and CEO. Just getting to the state level to compete for Miss America requires leadership and hours of training and community service.

“Miss America has been supportive of the United States armed forces … going back to 1942 when our Miss America raised over $2.5 million in war bonds -- the most [raised] of any individual,” Krebs said. “Miss America is also serving her country, but in a different way.”

In July, the current Miss America, Camille Schrier of Virginia, joined the USO for its first in-person morale tour since the coronavirus pandemic shut down such events.

A path to education

Like many troops enlisting out of high school in hopes of paying for college, Miss America winners also gain access to scholarships.

In Mifflin’s book, she quoted Chante Griffin, Miss Teen of California in 1996, who noted this similarity of the organizations to promise education to middle- and working-class young women.

“[W]hether wearing a bikini or a beret, they all offer up their bodies to country in pursuit of their piece of the American Dream,” Griffin said.

The Miss America Organization doles out more than $5 million a year in scholarship money, Krebs said. Medina alone has received more than $137,000, including a full scholarship to Hollins University in Roanoke, Va., when she was crowned Miss Virginia Outstanding Teen.

“I think that one of the most incredible things this organization has been able to give me is the ability to continue my education and to feel empowered through my education,” said Medina, who is the daughter of two Navy officers. “And it's another avenue of what I'm hoping to be able to speak to as Miss D.C., is to get the next generation involved with this organization so that they can take advantage of the scholarship opportunities. I really think education is power.”

Sohn used $2,000 won along with the title of Miss Western Maryland to pay for medical school applications and then took home another $12,400 with the title of Miss Maryland that she plans to put toward student loans. She holds a Bachelor of Science in molecular and cellular biology from Johns Hopkins University, where she also minored in music, and a Master of Science in physiology and biophysics from Georgetown University.

Growing up, Sohn said she watched Miss America competitions amazed that while the women wore sparkling tiaras, they also were doctors, lawyers and working professionals who were dedicated to community service.

She saw the same dedication to service in her brother and cousin, who are Navy doctors, which inspired her to look toward military service as she pursued her goal to become a doctor.

“What I really liked was that the Navy goes on these humanitarian missions to underserved communities, and I thought that was just incredible,” Sohn said. “Something that was instilled in me from a really young age is that we cultivate these talents and these skills, not just for our own benefit and our own enjoyment, but also for those around us and the ways that we can be of service to those around us.”

Following a rebranding effort in 2018 that included retiring the swimsuit portion of the competition, the Miss America Organization has turned away from the phrase “beauty pageant” to better encompass the full potential of the women who compete, Krebs said. It’s no longer about physical appearance, but about contestants proving they have the skills to take on the full-time, paid job of representing the organization and wearing the crown.

“I think it shows how evolved we are and how our culture continues to evolve to not only see women for being beautiful or for looking good in a swimsuit, but for also being educated and for being leaders,” said Torres, who works as a loan officer in her civilian career. “That's what I love about the new Miss America rebranding, is that it's about business, it's about leadership, it's about connecting with your community, more than it is about your body style.”

The 2021 Miss America competition will be broadcast live from the Mohegan Sun Arena in Connecticut. The date in December has not been announced.

In the interim, each woman said they will be juggling their duties as a state titleholder with preparing for the big competition and school, work and whatever military duties are scheduled.

It can be a lot to manage, Spence-Carroll said.

“I wouldn't have kept doing this and trying year after year after year, if I didn't absolutely love the program,” she said. “Honestly, it's a lot of work, but there's a sense of satisfaction knowing that every day, you're not taking these great leaps, you're taking these small steps that help build you up to your ultimate goal.”