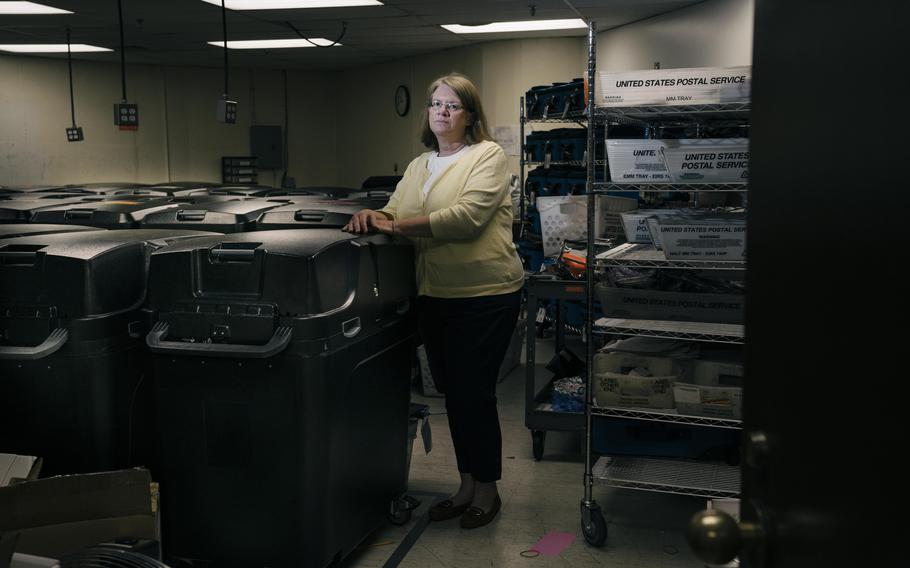 The threats and abuse are "too much," said City Clerk Susan Nash, pictured in a secure storage room for election equipment at city hall in Livonia, Mich. The room is kept locked and under video surveillance. (Sarah Rice/For The Washington Post)

In preparation for a vote on local tax assessments last week in Houghton County, Mich., county clerk Jennifer Kelly took extraordinary precautions, asking election staff in this remote northern Michigan community to record the serial numbers of voting machines, document the unbroken seals on tabulators and document in writing that no one had tampered with the equipment.

In the southeastern part of the state, Michael Siegrist, clerk of Canton Township, followed similar steps, even organizing public seminars to explain how ballots are counted.

Despite their efforts, they said they could not fend off an ongoing torrent of false claims and suspicions about voting procedures that have ballooned since former president Donald Trump began his relentless attacks on the integrity of the 2020 election last year.

"People still complained about our Dominion voting machines, about the need for more audits and most of all they complained about the use of Sharpies," Siegrist said, referring to the widely used pen, which has become the focus of a conspiracy theory gripping Trump supporters in Arizona and other states.

"It used to be fun to be an election clerk, but it isn't any more," he added.

Nine months after the 2020 election, local officials across the country are coping with an ongoing barrage of criticism and personal attacks that many fear could lead to an exodus of veteran election administrators before the next presidential race.

"The complaints, the threats, the abuse, the magnitude of the pressure — it's too much,'' said Susan Nash, a city clerk in Livonia, Mich., who has contended with ongoing questions about the integrity of the process in her community.

As Trump continues to promote the false notion that the 2020 White House race was tainted by fraud, there is mounting evidence that his attacks are curdling the faith that many Americans once had in their elections — and taking a deep toll on the public servants who work to protect the vote.

A Monmouth poll taken in June found that one-third of Americans believed that President Joe Biden won the White House due to fraud, including 63% of Republicans and Republican-leaning independents.

Officials from counties large and small say they are inundated with false claims, such as unsubstantiated allegations that Chinese hackers siphoned votes or that ballots marked by Sharpie pens were disqualified.

The anger is palpable and personal, leading many to fear for their own safety.

On Friday, an orange prison jump suit was delivered to offices of the Maricopa County Board of Supervisors, addressed to the five-member board, which has strongly denounced a recount of 2020 ballots commissioned by the GOP-led state Senate as a sham.

Threats against the Republican-majority board have picked up in recent weeks, particularly after it refused to comply with the Senate's most recent demand for access to local computer routers and internal logs, said Maricopa County Supervisor Bill Gates. The board's stance led some members of the state Senate to call for the supervisors to be jailed and even held in solitary confinement.

Last week, Gates said, the board received a voice mail in which a caller threatened to kill each member and their families.

"This stuff isn't organic," Gates said, saying the attacks amount to "a whole dehumanizing of people."

"It's that concept that we're somehow not worthy of respect or safety," he said. "That we're traitors."

Similar examples of intimidation are being reported by local officials across the country, said Liz Howard, the former deputy commissioner of elections in Virginia who now serves as senior counsel to the nonprofit Brennan Center for Justice. "I know of election officials in multiple states who have been forced to leave their homes because of threats against them and their families," she said.

A study by the Brennan Center released in June found that one in three election officials feels unsafe because of their jobs, and nearly one in five listed threats to their lives as a job-related concern.

The study, conducted with the Bipartisan Policy Center and Harvard Kennedy School's Ash Center for Democratic Governance and Innovation, concluded that the toxic environment "represents a mortal danger to American democracy, which cannot survive without public servants who can freely and fairly run our elections."

On Saturday, the Department of Homeland Security issued a bulletin warning state and local law enforcement officials of potential violence that "may occur during August 2021" fueled by "increasing but modest level of individuals calling for violence in response to the unsubstantiated claims of fraud related to the 2020 election fraud and the alleged 'reinstatement' of former President Trump," according to a copy obtained by The Washington Post. A man on the steps of the Michigan Capitol watches as protesters in Lansing demand an audit of the 2020 vote. (Sarah Rice/For The Washington Post)

"We are currently in a heightened terrorism-related threat environment, and DHS is aware of previous instances of violence associated with the dissemination of disinformation, false narratives, and conspiracy theories about the 2020 election," said a U.S. official, who spoke on the condition of anonymity to describe the bulletin.

The growing hostility has caught the attention of lawmakers in Washington. A bill introduced in the Senate last week and sponsored by Sen. Amy Klobuchar, D-Minn., would extend existing prohibitions on intimidating or threatening voters to include election officials engaged in the counting of ballots, canvassing and certifying election results.

At a virtual conference of the National Association of State Election Directors this week, election officials shared impassioned stories about the stresses of the job over the past 18 months: the challenge of running elections during a global pandemic; the unfounded accusations of fraud that followed Biden's victory last November; and for some, the physical threats that followed.

"I think the fear is that after 2020, no matter how hard we work, there are a lot of people out there who don't understand how elections are run and they're filling in those gaps with false information," said Chris Piper, Virginia's top elections official, who was among those who spoke at the conference.

"The people doing the hard work of putting on an election are your friends and neighbors," he added. "They are not political appointees. They're people you see in the grocery store and down the street walking their dogs. These are dedicated, passionate people. To have those accusations that are just unfounded, it's disheartening. And it's just been hard to watch."

In Des Moines this week, members of the National Association of Secretaries of State are gathering for an in-person conference — and organizers have taken extra precautions to protect the safety of those attending, said Maria Benson, a spokeswoman for the group.

Benson said the organization worked with the Iowa secretary of state's office along with local, state and federal law enforcement to beef up security.

Four hours to the east, Trump supporters have assembled in Sioux Falls, S.D., this week at a symposium hosted by MyPillow founder Mike Lindell, one of the most prominent promoters of the false claim that the 2020 election was stolen.

On social media, extremists have flooded platforms such as Telegram with messages promoting Lindell's gathering and the unsubstantiated notion that Trump will be reinstated in the White House this month, according to the Coalition for a Safer Web, which monitors online threats.

Most worrisome, election experts said in interviews, is the long-term impact on local clerks, who function as independent referees of voting in their communities — a job that is more essential than ever before.

"There is a scary backlash against these officials," said Lawrence Jacobs, a University of Minnesota political scientist who has been studying the effects of the doubts sown by Trump and his allies. "The umpires are leaving the stadium because they are frightened by what has happened after the 2020 election. They don't want to be threatened anymore."

"It has become really toxic right now, and it's very hard for someone to continue to do their jobs in this environment," said Paul Gronke, a professor of political science at Reed who led the survey.

The safety concerns are so serious that Colorado's director of elections, Judd Choate, said he had to adjust a certification course he teaches for elections personnel — adding a new emphasis on personal security.

"We are in harm's way as never before," Choate said.

The threats have grown particularly intense in Arizona, Pennsylvania, Wisconsin and Michigan, which has been roiled by mushrooming demands by residents for recounts of the 2020 vote in local counties.

One former GOP clerk, Tina Barton of Rochester Hills, Mich., received death threats last year after there was an initial reporting error about the 2020 results in her city that was quickly fixed. "You will pay for your [expletive] lying. ... We will [expletive] take you out, [expletive] your life and [expletive] your family," a caller told her in a voice message she provided to The Washington Post. "Watch [expletive] your back."

Ann Manary, a Republican clerk in Midland, Mich., has worked in the clerk's office for 31 years and said she has "never seen anything like" the threats, pressure and complaints that have rolled into her office since the 2020 election.

In an attempt to bolster faith in local officials, the Michigan Association of Municipal Clerks passed a resolution last week lauding election workers "for conducting the 2020 elections in a fair, secure, and accurate manner."

The resolution cited a state Senate report issued in June that forcefully rejected the claims of widespread fraud in the state, saying citizens should be confident in the results and skeptical of "those who have pushed demonstrably false theories for their own personal gain."

But in a sign of the growing toxicity, the chairman of the Oversight Committee that produced the report, Sen. Ed McBroom, has found himself reviled by Trump and his supporters, who have asked the state Republican Party to approve a resolution calling for his resignation.

"He doesn't deserve this," said Nash, the Livonia clerk who like McBroom, considers herself a conservative Republican. "They wonder why people don't want to be public servants any more. You do your job faithfully, and then get criticized for it."

Kelly, the Houghton County clerk, said she was relieved that last week's election went smoothly. But she is now fielding renewed demands for information about the 2020 race and questions about the use of Sharpies and the security of voting machines.

"We have done so many audits and reviews, but I now have new Freedom of Information Act requests for ballots and data and demands again for forensic audits," Kelly said. "It seems the 2020 election will never end."

The Washington Post's Emily Guskin contributed to this report.