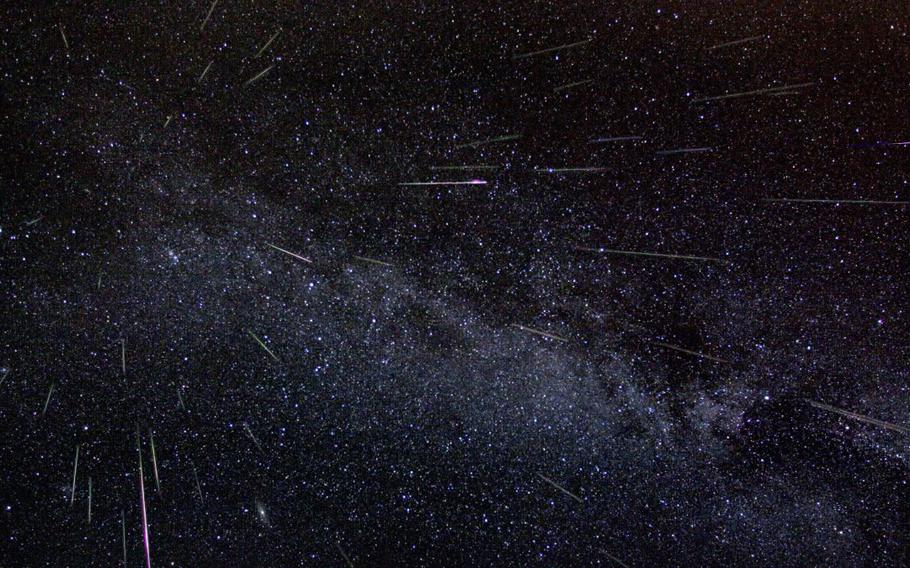 Up to 75 meteors per hour will streak across the night sky on Aug. 11, 2021. (Perseid Meteor Shower/Facebook)

Twinkle twinkle little star will be an understatement on Wednesday night, when up to 75 meteors per hour will streak across the night sky. The year’s most widely enjoyed meteor shower, the Perseids, will put on an epic display, perfect for making some fun family memories — weather permitting, of course.

Realistically, you can expect to see 30 shooting stars or more under a clear, dark sky if you play your cards right. The display ties that of the December Geminids, but August weather is ordinarily more conducive to getting folks outdoors than the prospect of snow, ice and biting cold.

This year’s show may be extra promising thanks to a cooperative moon, which will remain only dimly illuminated and below the horizon most of the night. That will allow even the fainter meteors to shine without being drowned out by a brighter moon’s domineering whitewash.

Particularly appealing about the Perseids is their tendency to feature sporadic fireballs, or especially brilliant meteors that shine brighter than Venus. They occasionally glow bright enough to illuminate the entire ground.

Unlike eclipses, conjunctions or rocket launches, the Perseids don’t discriminate geographically. Anyone globally will have a chance to enjoy the show. The Northern Hemisphere is favored because of the position of the radiant, or the constellation in the sky from which the meteors appear to emanate.

Meteors, or shooting stars, are small pieces of space-born rock or debris that burn up in Earth’s outer atmosphere. If they survive their descent and hit the ground, they’re meteoroids. Most meteors don’t reach the ground.

A meteor shower occurs when Earth passes through a more concentrated stream of debris during its annual orbit about the sun. Picture a stagnant swarm of bugs on the interstate. Each time you drive through them, you’d wind up with specks and streaks across your windshield. That’s how meteor showers work.

Every August, Earth plows through a debris stream left in the wake of Comet Swift-Tuttle, which last made its closest pass to the sun in 1992. It swings through the solar system every 133 years, tracing a large ellipse. We’re still encountering debris from its most recent journey.

Though shooting stars can be seen far and wide, the objects that spark them are surprisingly small — only the size of a grain of puffed rice. Fireballs come from chunks of debris the size of marbles. Larger objects the size of basketballs enter the atmosphere only about once a month.

Where do the colors come from?

Shooting stars derive their colors from two attributes: their elemental composition and their speed. As the meteors enter Earth’s atmosphere at 36 miles per second, they begin to encounter friction and air drag roughly 60 miles above the ground. That scraping against air molecules induces incredible amounts of heat, causing the meteor to combust. Some of the colors come from whatever metals or elemental compounds are present in the meteor.

The Perseids, rich in sodium, are tinged yellow. Other meteors contain magnesium, iron and silicon.

For brighter meteors, you may also notice a glowing tail lingering for a few moments. That’s the result of a cushion of air being compressed ahead of the swiftly moving cosmic pebble. It heats up and glows for a few moments as gases briefly become plasma. Sometimes a smoke trail sticks around, too. Astronomers can “hear” meteors by bouncing radio waves off the ionized air they leave behind.

How can I see them?

Look up — that’s it. Really. One of the most common questions we get is, “Where do we have to look?” There’s no region of the sky that’s favored more than others.

Many mistakenly search for the meteor shower’s radiant, since that’s the direction from which meteors will originate. That doesn’t have any bearing on where the meteors appear. It’s like driving through a snowstorm — sure, all the snow looks like it’s coming from in front of your vehicle, but the longest streaks will be seen out your driver and passenger windows.

The radiant, located in the constellation Perseus, will be highest in the sky in the predawn hours, boosting the number of meteors, but shooting stars should be visible in varying quantities all night long.

Telescopes and binoculars are a no-go. After all, you want to expand your field of view — not limit it. The more celestial real estate you can cover, the better.

Dark skies are your best bet to maximize viewing chances. The more ordinary stars you see, the greater the number of shooting stars you’ll witness. The moon, which will be only 12% full Wednesday night, will set at 10:13 p.m. in Washington, D.C., making for spectacular viewing. You’ll probably want to head out into the suburbs away from city lights. Beaches, ballfields and wide open spaces will offer the most expansive views of the sky.

What if I miss the show?

If that fails, the Geminids peak during the second week of December.