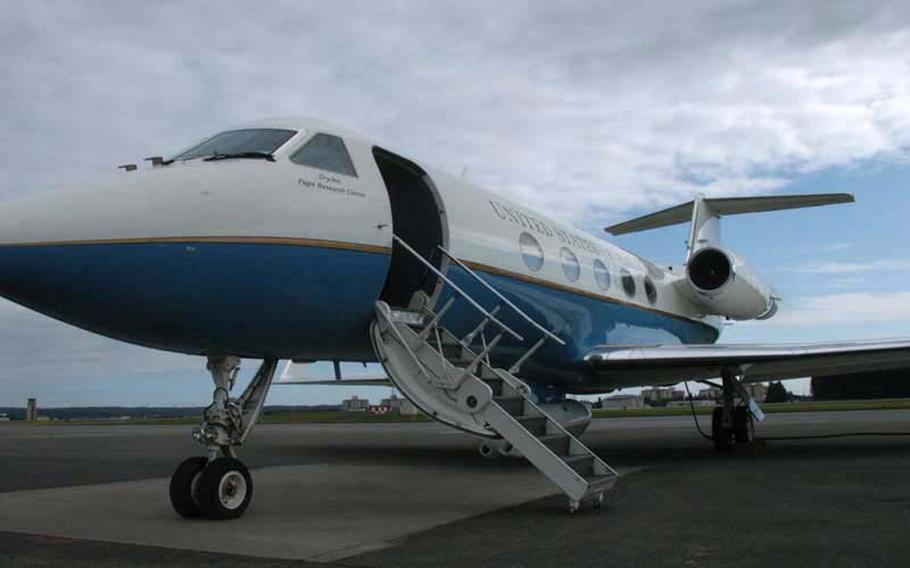 Buy Photo
The C-20A used by NASA for its UAVSAR missions is a converted Gulfstream jet. A mysterious Gulfstream IV — tail number N515JA — returned to Michigan on Aug. 5, 2021, landing at Ypsilanti’s Willow Run Airport at 5:31 p.m. (Charlie Reed/Stars and Stripes)

On Saturday, it made a one-hour flight from Willow Run to Gaylord airspace and back, flying circles over I-75, Gaylord and Otsego Lake at 41,000 feet.

Those were among the hundreds of ideas shared last June on social media by curious onlookers after atmospheric conditions were just right for the vapor trails to be visible.

“We took a lot of calls on that plane, with a lot of ideas about what it was, but since then, nothing new here,” Cherry Capital Airport Director Kevin Klein said.

“Frankly,” he added, “last summer I was as interested in it as everyone else.”

A previous owner of the plane, Fabian Bello of Journey Aviation in Boca Raton, Fla., said the plane, which left Michigan late last summer, was conducting “atmospheric research” for commercial — not military — applications.

The repeated flights in the same location were made to achieve consistent results, Bello said.

Consistent results for what, however, remains a mystery.

There might not be anything new to report in Traverse City, but the plane has covered a lot of ground — er, sky — since last departing the area on June 30, 2020.

On that date, Flight Aware shows the plane made a single trip from Willow Run airport to Traverse City airspace and back, then flew to Newport News, Virginia, and landed at Williamsburg International Airport.

Repeated flights by the same plane have since been recorded in Newport News, Virginia; Flying Cloud, Minnesota; Salina, Kansas; Oxnard and Victorville, California and Honolulu, Hawaii, with each flight lasting between 24 minutes and more than six hours, data shows.

The return of the plane to Michigan has not, thus far, involved a flight over Traverse City airspace, Flight Aware data shows.

In September, ownership of the plane changed hands, registration documents from the Federal Aviation Administration show, and the plane now belongs to Aery Aviation, LLC, of Wilmington Delaware.

Aery, like Journey aviation, offers a menu of services, including, “design, modification, and certification of modern business jets to DOD (Department of Defense) flight standards to support special mission tasks in support of government customers.”

A voicemail message left with the company was not returned and an email to the press office listed on their website was returned as undeliverable.

In December the company announced on its website it would be purchasing 13 aircraft, including Gulfstream IVs, as part of a five-year, $146 million contract awarded to Aery and one other company, Mountain Aviation LLC of Denver, by the U.S. Navy.

Between June 6 and June 30, 2020, N515JA made 12 flights between Willow Run Airport in Ypsilanti to the airspace above Traverse City, sometimes also circling Flint, data from Flight Aware, shows.

Those flights lasted between 1 hour and 13 minutes, and 2 hours and 58 minutes and came to the attention of local residents the afternoon of June 19, 2020, when atmospheric conditions were just right for a series of white vapor trails to appear in the sky.

On June 19, 2020, Grand Traverse 911 mentioned the aircraft on their Facebook page, and suggested the pilot could be participating in a training exercise.

Aviation experts soon put the kibosh on the pilot training theory, a YouTube video showed the right side of the plane had been modified with a large camera lens and Federal Aviation data showed repeated flights to the area, sometimes twice daily, between June 6 and June 24, 2020.

Willow Run is known in aviation circles as an airport where technological advances are tested, particularly those regarding mobility, Klein said.

While Flying Cloud airport in Minnesota is known as a home base for corporate business jets, Klein said Newport News and Honolulu airports are both known for their proximity to U.S. Naval bases.

The Salina, Kansas airport has an Army Aviation Support Facility and the Victorville, California, airport is known in flight circles by another name — the Southern California Logistics Airport, information on each facility’s website states. Last summer, Klein said any official curiosity he had over the plane ended when Cherry Capital inquired whether the repeated flights meant the pilot needed assistance and the response was, no.