Teachers get taste of recruit life at Parris Island; that includes getting yelled at 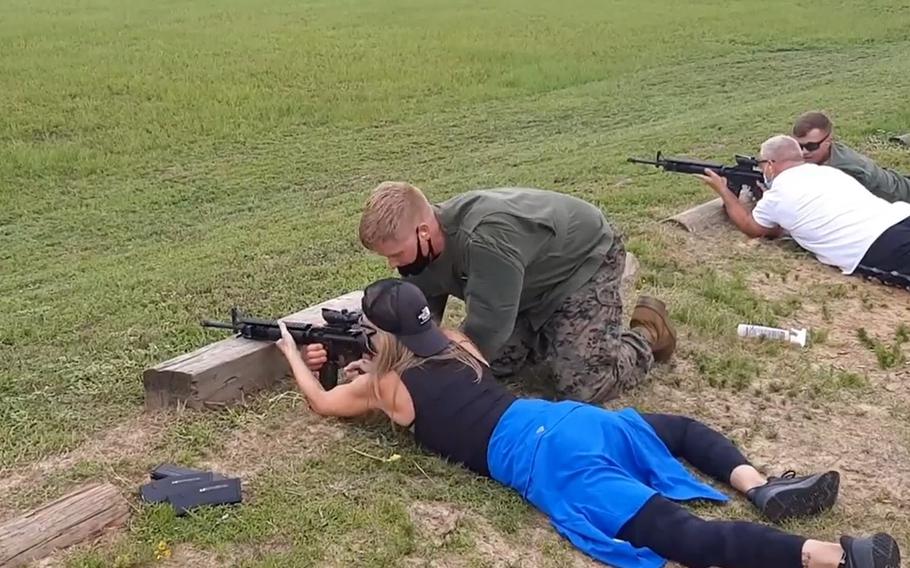 A few dozen teachers from across the eastern United States who got a behind-the-scenes glimpse this week of the grueling 13-week Marine Corps training that occurs at Parris Island on the Atlantic Coast. The educators are participating in an Educators’ Workshop offered by the U.S. Marine Corps. (Screen capture from video/The Island Packet)

De Sadier is not a Marine. Until Wednesday, she had never fired a gun.

The physical education teacher and basketball coach at Stranahan High school in Fort Lauderdale, Fla., is among a few dozen teachers from across the eastern United States who got a behind-the-scenes glimpse this week of the grueling 13-week Marine Corps training that occurs at Parris Island on the Atlantic Coast.

The educators are participating in an Educators’ Workshop offered by the U.S. Marine Corps.

The aim of the program is to give teachers a taste of the training so they can be better informed and say to high school students, “Hey this may be a good fit for you, or maybe you should try something else,” Capt. Philip Kulczewski, a Marine Corps Recruit Station spokesman, said.

It’s the first Educators’ Workshop at Parris Island in more than a year-and-a-half because of COVID-19, and 47 teachers from across the region traveled to the Marine Corps training base to participate, Kulczewski said. Usually, a dozen are conducted each year at Parris Island and the branch’s other recruiting depot in San Diego.

The teachers stood out like sore thumbs wearing shorts and tennis shoes while gun-toting recruits trained in their cammies.

But the rounds De Sadier was firing were live, and the shouts from the drill instructors when the teachers first arrived were real. On the quieter side, they’re also learning the history of the Marines along with its educational and job benefits.

A welcome from the drill instructors

The teachers arrived Wednesday night, staying in a hotel in Beaufort. Early Thursday morning, straight off the bus, they got the same treatment from the drill instructors that recruits get. Well, almost.

“It got a little bit watered down, but it was pretty close,” Staff Sgt. Tyler Leikness, who planned the Educators’ Workshop, said of the greeting drill instructors gave the teachers.

In the early 1960s, yellow footprints were painted on the pavement in front of the recruit-receiving barracks. Their purpose is to help brand-new recruits know where to stand in formation while screaming drill instructors bark. The teachers stood in those same footsteps getting an earful about taking the first step toward becoming a member of the world’s finest fighting force.

“It was impactful to me,” Tammy Blau, an art teacher from southeastern Michigan, said of the moment she stood on the yellow footsteps, “because I know it’s something that’s traditionally done.”

Blau sees so many students who lack focus, she said, and the Marine Corps may be a good fit for some of them. She came because she wanted to learn more so she has better information to pass along to her students. The diversity of jobs that the Marine Corps offers surprised her.

Besides the weapons training, the teacher recruits got to see the pool training for “iron ducks.” Iron ducks are recruits who need additional training in learning to swim.

They visited nearby U.S. Marine Corps Air Station Beaufort where they saw firefighter jets and talked to Marines, and they also got to see a portion of the Crucible — the final 54-hour training each recruit must undergo before officially becoming a Marine. On Friday, they were scheduled to be in the audience to watch members of Charlie and November Company graduate.

“It was fun,” said Heather Hendrix, a teacher from Alabama at the firing range, where the cracks of rifles firing and an acrid smell filled the air.

As she was shooting an M16, Hendrix’s son, a Marine recruit, was training somewhere on Parris Island. Experiencing a little bit of what he’s experiencing is what brought her to South Carolina. But being so close without being able to see him was bittersweet.

“It’s been eye-opening to get a taste of what he’s doing and what he’s going to do,” Hendrix said.