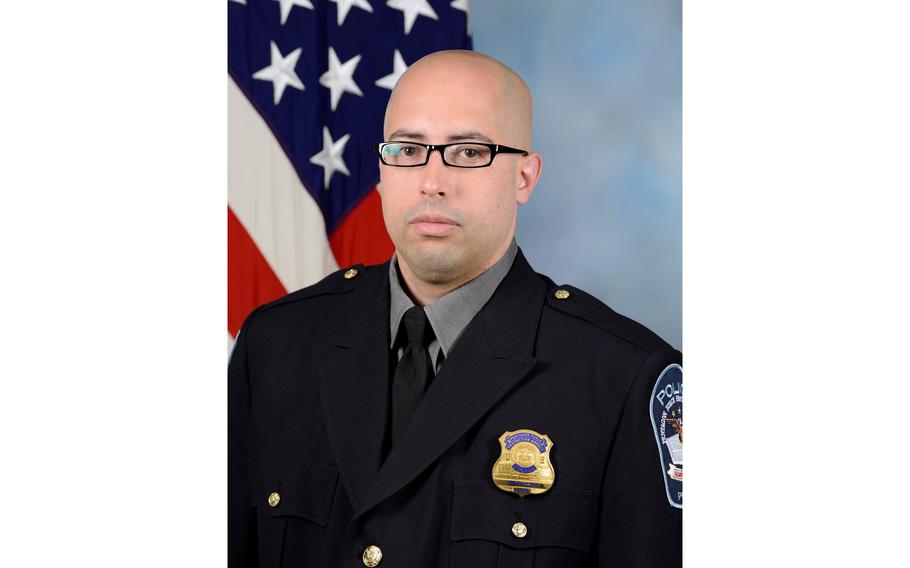 WASHINGTON — The man who killed a police officer at the Pentagon on Tuesday had just exited a bus outside the building before he stabbed the officer and used his victim’s service weapon to shoot himself, the FBI said Wednesday.

Officer George Gonzalez, an Army veteran who had only been with the police force for three years, was working at about 10:40 a.m. when 27-year-old Austin William Lanz got off a bus at the Metrobus platform outside the Pentagon “and immediately, without provocation, attacked him with a knife,” the FBI posted on Twitter.

“A struggle ensued, in which the subject mortally wounded Officer Gonzalez and then shot himself with the officer’s service weapon,” the FBI tweeted. “Other [Pentagon Force Protection Agency] officers engaged the subject, who ultimately died at the scene.”

No motive has been reported. The Pentagon declined to provide Gonzalez’s age or job duty on Wednesday, citing the ongoing investigation.

“As a Pentagon police officer, [Gonzalez] took our mission of ‘protecting those who protect our nation’ to heart,” the Pentagon Force Protection Agency said Wednesday in the statement. “Officer Gonzalez embodied our values of integrity and service to others.”

Gonzalez, a Brooklyn, N.Y., native, joined the Pentagon’s police force in July 2018 after a career serving at the Federal Bureau of Prisons and Transportation Security Administration. He was promoted twice during his time with the Pentagon Force Protection Agency and attained the rank of senior officer in 2020, according to the statement.

He was “gregarious” and “well-liked and respected by his fellow officers,” the agency said. “As we mourn the loss of Officer Gonzalez, our commitment to serve and protect is stronger. Officer Gonzalez’s family is in our thoughts and prayers. May he rest in peace.”

Gonzalez also served as an active-duty cannon crewmember in the Army from 2003-2005 and remained in the Army Reserve until 2011, according to his service record. He deployed to Iraq from August 2004 to July 2005, earning an Army commendation medal.

It remains unclear why Lanz, of Acworth, Ga., was at the Pentagon. He had never served in the military, though he enlisted in the Marine Corps in October 2012 but was administratively separated less than a month later and never completed boot camp, the AP reported Wednesday.

Lanz was also facing several criminal charges from April in Cobb County, Ga., including a count of making a terrorist threat, the AP reported. He was out of jail on a $30,000 bond when the Pentagon attack occurred.

The Pentagon was on lockdown Tuesday for nearly two hours after the stabbing. It reopened shortly after noon, though the Metro entrance where Gonzalez was stabbed remained closed Wednesday.

Several other people were injured in the response to the stabbing, which included an exchange of gunfire, PFPA Chief Woodrow Kusse told reporters Tuesday at the Pentagon. Among those hurt was a civilian bystander, the FBI said Wednesday.

The Pentagon Transit Center, which includes the Metrobus platform and Metro train line below it, also remained closed Wednesday, with trains and busses diverted instead to Pentagon City as the investigation continues.

Flags flew at half-staff at the Pentagon in honor of Gonzalez starting Tuesday evening at the direction of Defense Secretary Lloyd Austin, who was not in the building during the attack. He visited the PFPA headquarters Tuesday to offer his condolences to the Gonzalez’s colleagues, according to chief Pentagon spokesman John Kirby.

“This fallen officer died in the line of duty, helping protect the tens of thousands of people who work in — and who visit — the Pentagon on a daily basis,” Austin said in a statement Tuesday night. “He and his fellow officers are members of the Pentagon family, and known to us all as professional, skilled and brave.”

Gen. Mark Milley, chairman of the Joint Chiefs of Staff, was spotted talking with PFPA officers Tuesday evening before leaving the building. Shortly after, he issued a statement extending his “deepest condolences to the family, friends and Pentagon Force Protection Agency colleagues.”

“This officer’s bravery will always be honored,” Milley said. “We are forever grateful for the professionalism, dedication and courage he and every officer exhibit to ensure the safety and well-being of all of us who serve at the Pentagon.”