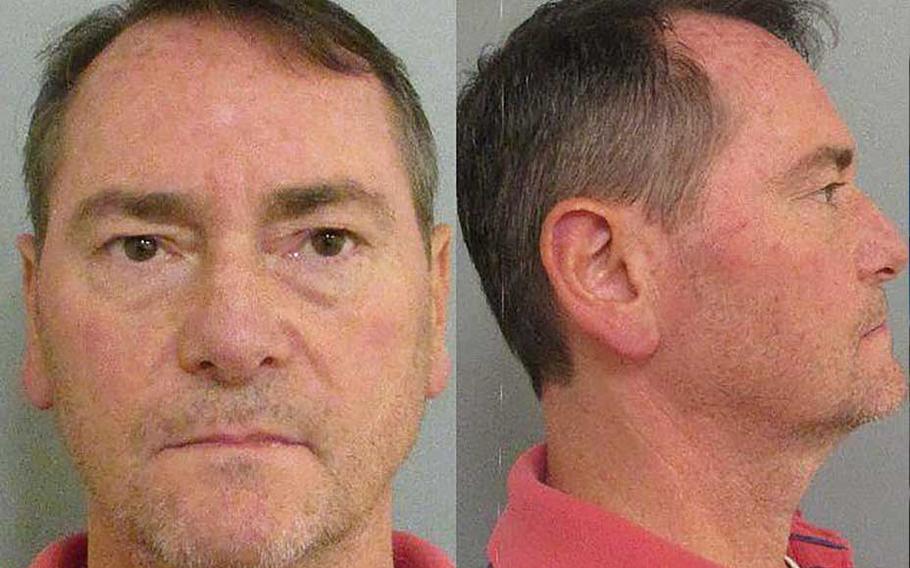 BATON ROUGE, La. (Tribune News Service) — FBI Special Agent David Harris was tasked with investigating crimes against children, including child pornography. But, off the clock, he was committing child sex crimes of his own, including repeatedly exposing himself to teen girls, according to newly filed court records.

The records cite a series of text messages over the past few years. During a 2019 exchange on the topic of what he prefers, Harris said: “I mean they have to be in their teens. I’m not a weirdo. ... Unless I move to Kentucky where 16 is the age of consent.”

Harris, 51, now faces a string of criminal charges — including indecency with a child, crimes against nature and sexual battery — after a sprawling investigation spanning three states: Louisiana, Texas and Florida. He was arrested earlier this summer in Ascension Parish, where a judge declared him a “threat to the public at large” and ordered him held without bond.

His arrest warrant out of Tyler, Texas, which was filed into the court record and released to the media Tuesday, reveals new details about the alleged crimes, which date back several years. The document also sheds light on how the investigation started — and how it finally landed Harris behind bars, bringing his law enforcement and military careers to a screeching halt.

The warrant calls for his arrest on indecency with a child. The document was obtained by KETK-TV, a local television station that provided a copy to The Advocate.

In addition to his assignment with the FBI, Harris was a colonel in the U.S. Army Reserve, a position he earned after decades of military service starting with his 1992 graduation from West Point.

The initial complaint against him, which prompted the criminal investigation, came from a man whose wife had been sleeping with Harris, documents say. He filed his complaint with Army investigators after finding a letter describing the affair and sexual relationship, the warrant says.

Law enforcement officials in Texas conducted interviews and ultimately found evidence that Harris had exposed himself to teen girls — ages 13 and 14 — on multiple occasions in 2018 and 2019, including skinny dipping in front of them.

The daughter — who later described Harris as a family friend during an interview with investigators — once “called him a pedophile” and said she would rather not discuss the issue further, the warrant says. She told law enforcement that the two families took vacations together and often visited each other in Texas and Louisiana.

She also described a time when Harris removed his shorts and underwear and got into bed with her, according to the warrant. The girl then yelled for his wife, who was in the kitchen, which prompted Harris to get up and redress himself, the warrant says. Harris was “drunk most of the time,” the victim told investigators. She was 13 when that happened.

Her mother was having an affair with Harris around the same time, according to the warrant.

During a text message exchange in 2018, the two were discussing his “desire to be nude in front of people, in public places,” according to the warrant, and Harris told the woman: “Again, nudity to me is like nothing and my wife is totally used to it.”

On one occasion, following a mutual trip to Florida, she scolded Harris for being “a little inappropriate with staring at the teen girls in bikinis,” the warrant says.

The following day, the woman texted Harris about planning a sexual encounter with her former nanny, according to the warrant. “Please don’t be creepy with teenagers,” she said, adding that the nanny was “legal & more age appropriate for our fun.”

When she asked him if he even had a designated age range or “just anything goes,” he responded that “they have to be in their teens,” the warrant says. “You just be you and find some young chick then. Maybe she’ll be more open to things,” the woman texted back.

A few days later, the two were discussing “employment opportunities and disadvantages” for African Americans, the warrant says. “That’s so unfortunate ... they are not just the help ... they grow the best watermelons and really improve everyone’s dancing,” Harris texted. “Should I go back to being inappropriate with teen girls?”

The warrant was signed June 30 by a judge in Smith County, Texas, who set bail at $1 million.

It remains unclear whether Harris will eventually be extradited to Texas at some point. That likely would happen after his three Louisiana cases are resolved.

Details about those cases — which will be prosecuted in Ascension, East Baton Rouge and Orleans parishes — remain scarce because the warrants have been filed under seal.

An attorney representing Harris declined to comment on the allegations from the Texas warrant, saying he represents Harris in the Louisiana cases but hasn’t been retained in this one.

Until his recent arrest, Harris lived with his wife and daughter in Prairieville and was assigned to the FBI New Orleans Field Office. When the investigation against him was launched in February, he was completing an 18-month assignment to the FBI Internet Crimes Against Children unit based in Baltimore.

He had no disciplinary record with the FBI and no known criminal history at the time.

A spokesman with the U.S. Army Reserve said in a recent statement that the agency “takes all allegations of misconduct seriously and continues to monitor the situation.” Harris could face discipline in the future once ongoing investigations have concluded.

FBI officials have declined to answer questions about his employment status, saying only that the agency is “fully cooperating in this matter.”