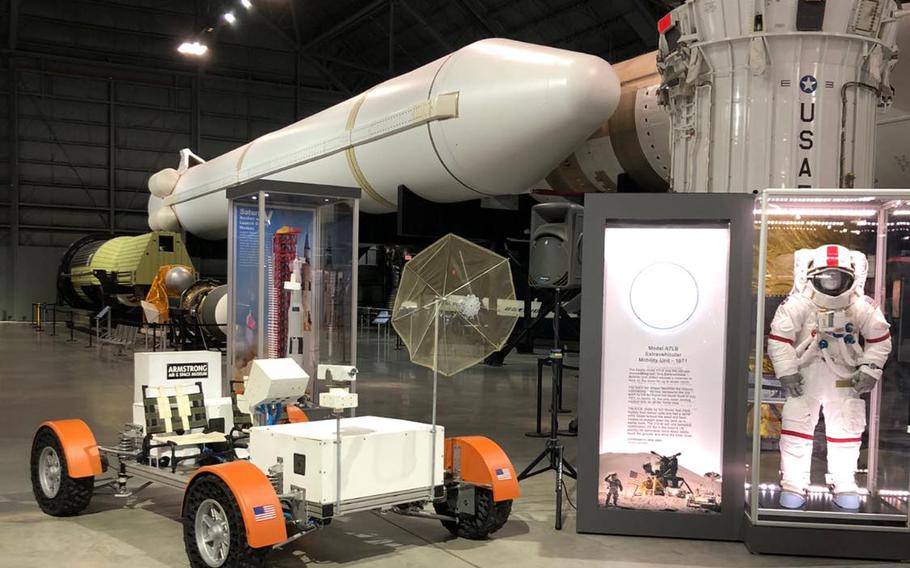 The National Museum of the U.S. Air Force’s latest exhibit celebrating the 50th anniversary of the Apollo 15 mission to the moon included a replica of the first of three lunar rovers astronauts drove on the moon’s surface.  (Facebook)

(Tribune News Service) —The National Museum of the U.S. Air Force is marking the 50th anniversary of the Apollo 15 mission to the moon with one of that mission's defining moments: a replica of the first of three lunar rovers astronauts drove on the moon's surface.

The replica of the rover, built by Ohio Northern University engineering students, is a 10-foot-long, one-to-one scale electric, drive-by-wire, four-wheel-steering car, said Greg Brown, experience coordinator for the Armstrong Air & Space Museum in Wapakoneta, who was at the museum Monday.

"That was the first mission that actually used a lunar rover," Brown said, referring to Apollo 15.

The rover replica — capable of a top speed of some 5 mph — was at the museum on Monday only, but the museum's overall exhibit celebrating the Apollo 15 mission, will be in place through Saturday, August 7, and is well worth exploring, museum officials said.

"Our rover, just like the vehicles that went to the moon, is a four-wheel steering vehicle," Brown said. "Not just four-wheel drive ... so we can use all four (wheels) to turn around. It's pretty maneuverable."

He added: "It's actually pretty fun to drive."

The three actual rovers remain on the surface of the moon, Brown noted.

Apollo 15 was the first "J" mission to the moon, missions meant to be extended scientific endeavors, he said. 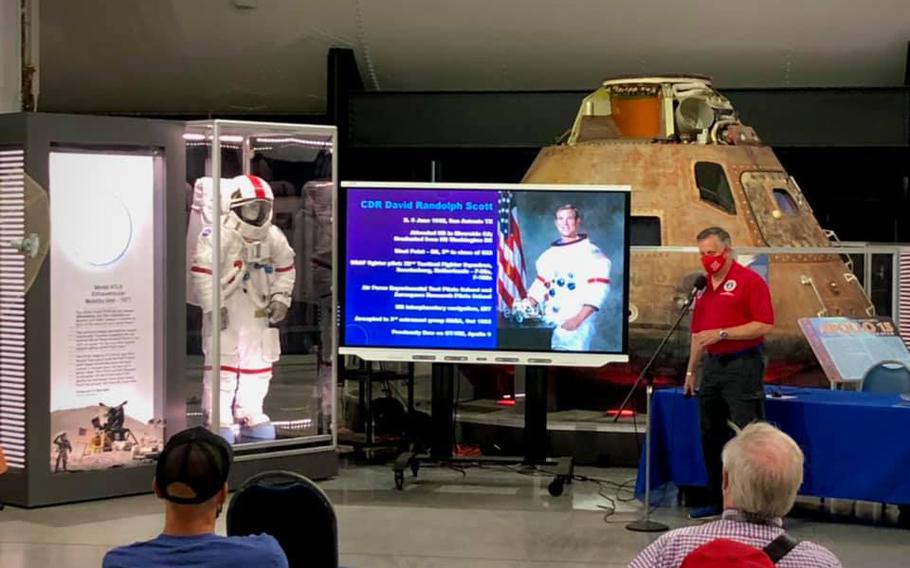 The National Museum of the U.S. Air Force’s latest exhibit includes the Apollo 15 command module Endeavor, complete with atmospheric re-entry burn-streak marks. The module is on loan from the National Air and Space Museum in Washington, D.C. (Facebook)

The overall exhibit includes the Apollo 15 command module Endeavor, complete with atmospheric re-entry burn-streak marks. The module is on loan from the National Air and Space Museum in Washington, D.C.

David Thomas, a special events coordinator for the Air Force Museum, said the overall space celebration includes more than the stationary exhibits, which can be found in the museum's building four.

On Saturday, the museum will host a "rocket day," in which visitors can build rockets and launch them outside on the museum's front lawn.

"We have 750 rockets for visitors to build and launch," he said.

While masks and face coverings are once again required while inside the museum, they are not required while outside. (Thomas said the new masking requirement has not affected attendance at the museum.)

Visitors will also be able to inspect the cockpit of the rocket-powered, hypersonic X-15 research plane, similar to the one flown by former Apollo astronaut (and Ohio native) Neil Armstrong when he was a test pilot. Visitors can also enter the C-119 "satellite catcher" aircraft, Thomas said, and volunteers will be on hand to discuss other planes and missiles.

At 6 p.m. Thursday, the museum will also host the "Solar System 5-K run" on historic Wright Field, featuring a proportional representation of the solar system.

For more information about the space celebration, visit the museum website at https://www.nationalmuseum.af.mil/Upcoming/Space-Celebration/