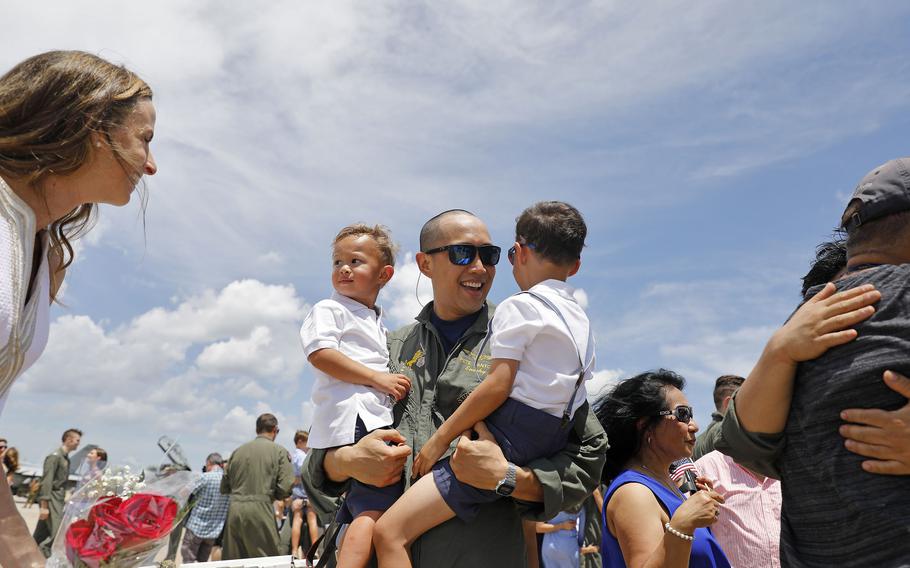 Lt. Cmdr. Pete Santos is greeted by sons Noah, left, and Jack along with his wife, Kristina Santos, after returning to Naval Air Station Oceana on Tuesday, July 13, 2021. (Jonathon Gruenke, The Daily Press/TNS)

VIRGINIA BEACH, Va. (Tribune News Service) — Naval Air Station Oceana hopes to stretch its funds by finding partners to take over some jobs and by leasing some of its unused land.

Capt. John Hewitt, the base commanding officer, will sign an agreement with the city of Virginia Beach next week to launch the effort.

Called Future Base Design, one element of the program calls for finding new ways to provide “non-core” base services, ranging from the golf course to recreation services to barracks housing. How exactly that would look is still to be determined, Hewitt said.

The other thrust of the program focuses on some 350 to 400 acres of land.

Some, like the farm fields along the east side of Oceana Boulevard or the site of former housing on Harper Road, is outside the base’s security fence line. Some, including the prime parcel that housed the stables shuttered last year, is within the fence line.

Hewitt said the aim is for lessors to provide in-kind services such as road repairs or mowing or other basic maintenance services equivalent to the fair market rent of the land instead of paying cash. Cash has to be split 50-50 with the U.S. Treasury, while the in-kind services would be performed on the base.

He said a consultant has estimated the value of those in-kind services could reach $2.5 million to $3 million in the near future.

That would represent a big addition to the base’s current $9.6 million operating budget for maintenance, making it easier to step up the pace of needed work on hangars — a core service for the base’s military mission, he said.

Hewitt said any development would comply with constraints Virginia Beach has long imposed on the neighborhoods around Oceana, in response to worries that development put the base at risk during the Base Realignment and Closure round in the early 2000s.

“I can assure you that Oceana is here to stay,” Hewitt said.