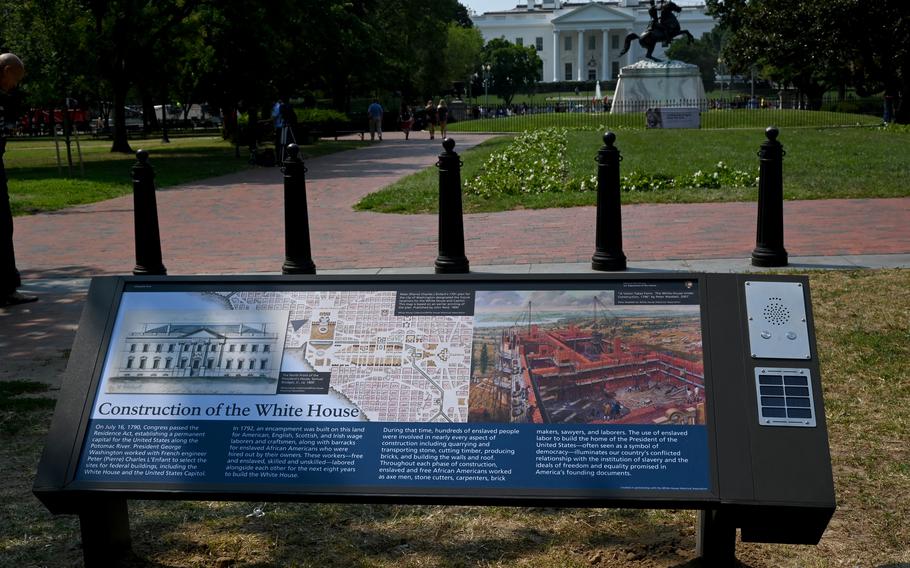 Three new plaques in Lafayette Square note the contributions of enslaved people to the building of the White House, the location of the park as a protest zone and former first lady Jacqueline Kennedy's role in preserving the park and creating the White House Historical Association. (Katherine Frey/The Washington Post)

WASHINGTON — The unveiling ceremony on the north side of Lafayette Square on Wednesday wasn’t large and it didn’t last long, but history was made. Or rather, history was recognized. Finally.

Fifty or so people gathered in the late-morning swelter to watch as Stewart D. McLaurin, president of the White House Historical Association (WHHA), and John Stanwich, the National Park Service’s liaison to the White House, removed black cloth draping three historic markers on the north side of the square.

Each marker told a different story about the park, but it was the first marker, the one that acknowledged the role slavery played in building the nearby White House, that felt monumental. To date there had been no other formal recognition, not a plaque or a memorial, noting that hundreds of enslaved people helped build and later maintain and staff the White House.

It concludes: “The use of enslaved labor to build the home of the President of the United States — often seen as a symbol of democracy — illuminates our country’s conflicted relationship with the institution of slavery and the ideals of freedom and equality promised in America’s founding documents.”

For Brandon A. Robinson, a Black attorney from North Carolina and a member of the WHHA who came to Washington for the unveiling, the message is an essential one.

It represents, he said, “a microcosm of a larger conversation that America is trying to have about telling all stories as opposed to having just one story. And that narrative is important not just for sentimental reasons, but because it’s the more correct way to tell the story.”

The impetus for the marker and a greater focus on the history of slavery at the White House came from a comment made by former first lady Michelle Obama at the 2016 Democratic National Convention, according to McLaurin.

“She said, ‘I wake up every morning in a house that was built by slaves,’ McLaurin recalled in an interview Tuesday. “And the next day we were inundated online with questions from people wanting information on the backstory of what she said and people who wanted to learn more.”

McLaurin,who is White, helped launch a research effort to find out as much as possible about the role slavery played in the White House. Early last year, the WHHA launched “Slavery in the President’s Neighborhood,” an online exhibit that examines and traces the lives of enslaved people at America’s most famous address. 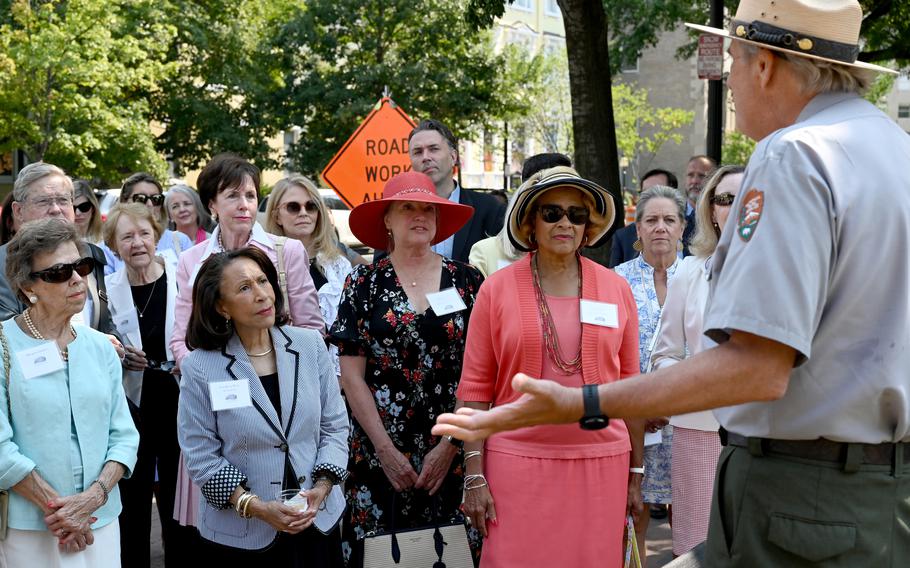 To date it has chronicled information about more than 300 enslaved men, women and children who can be linked to the building and staffing at the White House beginning in 1792 and lasting through the first half of the 19th century. They served in the presidential households of George Washington, Thomas Jefferson, James Madison, James Monroe, John Quincy Adams, Andrew Jackson, Martin Van Buren, John Tyler, James K. Polk and Zachary Taylor.

McLaurin said the WHHA is continuing its research and hopes to be able to locate descendants of individuals who had been enslaved at the White House, though that can be difficult because in many cases only the first names are known. He also said he wants there to be some acknowledgment or marker inside the White House, too. In a normal year, before the coronavirus, 500,000 to 600,000 visitors tour the White House. Learning more about its complete history would benefit everyone, he said.

Dedrick Makle and his son Joseph stopped to read the marker soon after it was unveiled. Makle, 39, a D.C. native who moved to California a decade ago, said he was glad to see the role of slavery acknowledged.

“Everyone knows the stories of the presidents who lived here, but no one knows how it was built,” said Makle, who is Black. “The comments about how slaves were pivotal and how much of a part they played in this presidential space is great to see after so many years.”

Eula Adams, a retired executive who is on the national council of the WHHA and lives in Denver, said it was important to stress that the history is nonpartisan.

“This is history for all Americans,” said Adams, who is Black. “So many of my friends and colleagues don’t really know this part of the story, and it’s important that we all know it.”

The two other markers unveiled Wednesday address the importance of Lafayette Square itself in the nation’s history and how that came to be.

One points to the significant role that former first lady Jacqueline Kennedy played in preserving the square and preventing the destruction of some of the historic buildings that surround it. Kennedy also helped found the White House Historical Association as a private organization that partnered with the Park Service to finance restoration and improvements to the White House and acquire art and furniture for its stately rooms.

“She’s 31 years old when her husband becomes president of the United States. Due to tragic circumstances, she is first lady for less than three years, but what she accomplished in that short period of time is still in process and procedure,” McLaurin said. “The foundation that she built has grown and is still what supports and enables presidents and first ladies today to maintain that museum standard of the White House.”

The final marker explains how the park has been the locus of protests over the past century, beginning with protests by female suffragists in 1917, after which a number of the participants were fined or arrested, and continuing to the present.

Protests are a regular feature in the square, from smaller daily demonstrations to much larger gatherings favoring or opposing presidents or their policies.

McLaurin describes it as America’s public square. “It’s a place where you can express your First Amendment views and you are literally within earshot of the president of the United States,” he said. “And that’s pretty remarkable.”