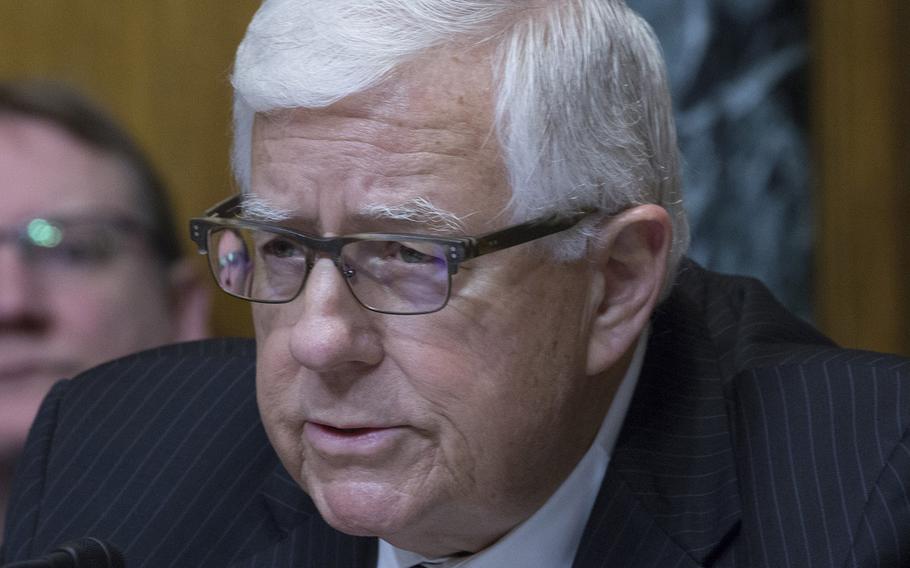 Enzi was riding his bicycle near his home in Gillette, Wyo., when he was injured Friday and flown to UCHealth Medical Center of the Rockies in Loveland, Colo.

Enzi "passed away peacefully today surrounded by his family," a statement posted to his Twitter account late Monday said. His family said it plans to share details about a "celebration of a life well-lived" at a later time.

The genial, low-key conservative was elected to the U.S. Senate in 1996 after serving as mayor of Gillette and a member of the Wyoming legislature. He decided not to seek a fifth term in 2020.

Enzi's gentle manner earned him respect and friendship as he chaired two committees: Budget and Health, Education, Labor and Pensions.

A fairly staunch conservative, Enzi had friends across the aisle. During a prolonged summer and fall negotiation in 2009, Democrats on the Senate Finance Committee tried to lure him into supporting what became the Affordable Care Act, a process that ended with no GOP support for the 2010 health law, President Barack Obama's signature domestic achievement.

Ahead of the 2014 election, Enzi was thought to be considering retirement rather than a bid for a fourth term. Without much warning, Liz Cheney jumped into the Senate race as a primary challenger in a move that roiled the waters of Wyoming's close-knit Republican circles.

The daughter of former Vice President Dick Cheney instead prompted Enzi's anger and he aggressively countered her challenge, leading her to bow out of the race and instead run successfully two years later for the state's at-large seat in the House.

After Republicans won the Senate majority in the 2014 midterms, Enzi used his seniority to claim the Budget Committee gavel until his retirement. His amiable manner served as a sharp contrast to his Wyoming predecessor, Sen. Al Simpson, R, who feasted off humor and enjoyed taking on politically fraught battles.

"I had the privilege of working with Mike for four years in Congress. He was a mentor and teacher and you could be sure any event that included Mike would be better because of his intellect, his dedication, determination and wonderful dry sense of humor," she said.

"Mike was a straight-shooter, an honest broker, and a soft-spoken but powerful advocate for the causes he cared deeply about. Whether it was pushing for fiscal discipline as head of the Senate Budget Committee or fighting for the needs of Wyoming's energy industry, Mike was always guided by principle and conviction."

A strong defender of his home state's oil and gas industry, Enzi remained popular throughout his tenure, winning reelection three times with more than 70% of the vote.

"Mike was 77 years old and only about seven months into retirement. Our friend was blessed with a great American life, and he lived it well. Mike was hugely accomplished ... but humble. He was powerful and influential ... but earnest and deeply kind," McConnell said. "He was ambitious ... but on behalf of the people of Wyoming, not personal gain or glory."

Senate Majority Leader Chuck Schumer, D-N.Y., also in remarks on the Senate floor, remembered Enzi as a "kind and gentle man, as a practical legislator, someone who sought common ground and was willing to leave strained disagreements for another day. He was forceful. He was principled, but he was also gentle, a rare and unusual combination, much needed in this body."

Enzi pushed a fiscal blueprint to balance the budget within 10 years, but his effort never prevailed amid government spending and the GOP's 2017 tax cuts.

During his Senate tenure, Enzi worked with Senate Democrats, including the late senator Ted Kennedy of Massachusetts, on reauthorization of Head Start early education and college aid programs.

Sen. Cynthia Lummis, R-Wyo., who succeeded Enzi in the Senate in January, recalled working with him in the state legislature.

"I always like to say in Wyoming, I've been following him around like a puppy dog, pretty much my whole life. So we've been very dear friends for many, many decades, and he's a salt-of-the-earth, great guy," Lummis told reporters Monday.

The Washington Post's Seung Min Kim contributed to this report.